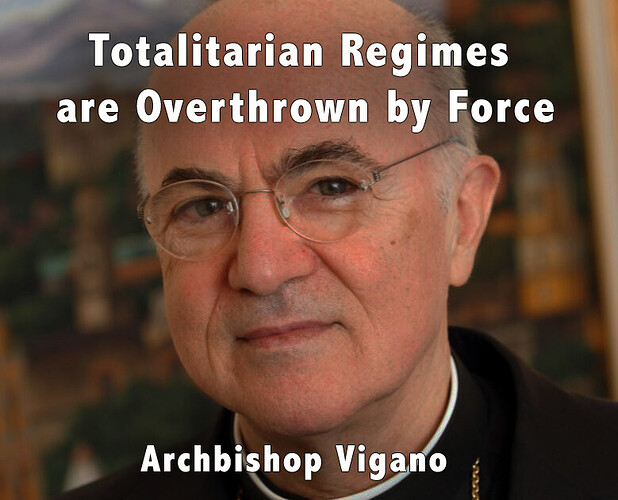 “In the course of history, totalitarian regimes have been overthrown by force.

It is difficult to think that the health dictatorship… can be fought differently, since all the powers of the State, all of the means of information, all the international public and private institutions, all of the economic and financial potentates are complicit in this crime.”

There can be no compromise with Satan. Not because of us. We’re corrupt and flexible. But Satan wants us dead or in chains. He gives us no option but to fight for survival and for a better world.

"No one will be part of the New World Order unless he carries out an act of worship to Lucifer. No one will enter the New Age unless he receives Luciferian initiation." —David Spangler, Director of the United Nations Planetary Initiative Project (Reflections on The Christ, Findhorn, 1978)

In 1991, David Rockefeller wrote: “The world is ready for a world government. The supranational sovereignty of an intellectual elite and world bankers is certainly preferable to the national self-determination practiced in past centuries.”

And he added: “We are on the verge of a global transformation. All we need is the ‘right’ global crisis and the nations will accept the New World Order.”

Today we can affirm that this “right crisis” coincides with the pandemic emergency and with the “lockstep” outlined since 2010 by the Rockefeller Foundation document *“Scenarios for the Future of Technology and International Development.”

In short, they have created a false problem in order to be able to impose population control measures as an apparent solution, cancel small and medium-sized businesses with lockdowns and the green pass to the benefit of a few international groups, demolish education by imposing distance learning, lower the cost of manpower and employees with “smart working,” privatize public health for the benefit of Big Pharma, and allow governments to use the state of emergency to legislate in derogation of the law and impose so-called vaccines on the entire population, making citizens traceable in all their movements and either chronically ill or sterile.

Everything the elite wanted to do, they have done. And what is incomprehensible is that in the face of the evidence of the premeditation of this terrible crime against humanity, which sees the leaders of almost the whole world as accomplices and traitors, there is not a single magistrate who opens a file against them to ascertain the truth and condemn the guilty and complicit.

Those who disagree are not only censored but pointed out as public enemies, as infectors, as non-persons for whom no rights are recognized.

TRAITORS: EVERYONE PROMOTING THE PSY OP

Viganò: Considerations on the Great Reset and the New World Order - LifeSite

Archbishop Viganò: COVID agenda aims to destroy national sovereignties and the divine mission of the Church