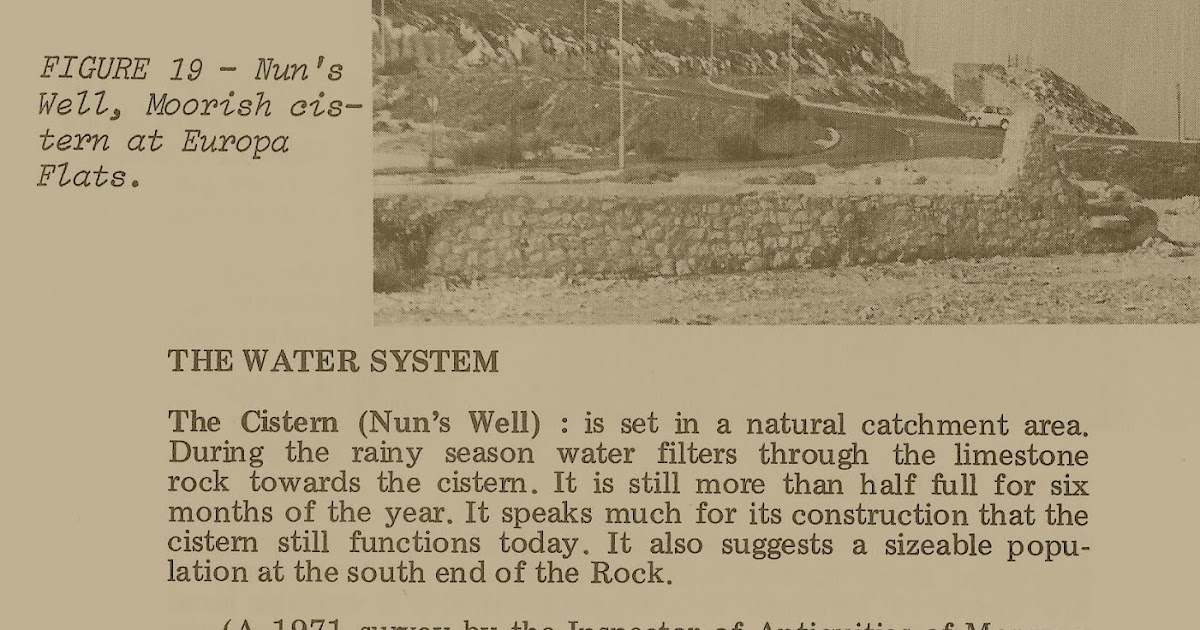 The People of Gibraltar

When I lived in Gibraltar during the 1950s, it never crossed my mind to have a look at that enigmatic underground structure known as the Nuns' Well. In fact, I didn't know it existed.

The actual cistern in lies underground. The crenellated structure shown in the photograph was built by the Royal Engineers in 1988 (2012)

The "well" is an underground chamber, perhaps of Moorish origin or older, located at Europa point. The oldest map reference available is that on a sketch by the Dutch Map maker, Anton Van den Wygaerde dated 1567. This version seems to show a structure with 20 pillars not all of them with supporting arches.

A 17th century Spanish engineer also includes it in his well-known map of the Bay in rather less detail than Wyngaerde. He labels it "cisternas".

In 1964, a local student Lionel Perez, carried out a complete survey of the site as part of his university thesis. Amazingly it was the first ever to have been done. According to Local historian George Palao, in 1971 a certain Mr B. Drissi, Inspector of Antiquities to the Government of Morocco and an expert on Moorish architecture was invited to Gibraltar to give his considered opinion. His somewhat surprising conclusion was that the structure predated Gibraltar's Moorish occupation. But as far as I know he gave no indication as to why he came to this conclusion or whether it was once used as a cistern, a bath - or indeed something else entirely.

I am not an architect but I find it hard to believe that the shape of the arches can offer any clues as to the when the Nun's Well was constructed. The arches used could be described as either Semi-circular or segmented ones. Both were apparently 'invented' by the Romans. The first was perhaps 'the' original arch, the second used for the first time around the 1st C BC. As these styles can be found all over Spain on buildings known to have been built by either Romans, Visigoths, Moors or Christians there is really no way of dating the place from them.

However, Vallejo does offer another interesting theory. He suggests that the Nuns' Well was a bath, but that it was of Jewish rather than Moorish origin. In other words, the place was a traditional Jewish Mikveh.

The main similarities between a mikveh and the Nuns' Well can be summarised as follows.
Running water as a source - still water could not be used a Mikva
Two indispensable chambers - Seeding basin and an immersion pool
Smaller chamber used as original collection area.
Possible immersion chamber seems deep enough for full immersion - a most for a Mikvah.

Running against the Mikvah theory is the lack of a 'hashaka' hole and perhaps a separate basin to clean out the immersion basin. Nevertheless, Vallejo suggests that during the first Jewish Diaspora and well before Tarik's little trip across the Straits of Gibraltar, it would have not have been at all unusual for at least some of the Jewish people to have settled in Carteia or anywhere along the Bay within sight of the Rock. From there to settling somewhere on the Rock would have been one short step.

The truth is that I have always found it difficult to believe that absolutely nobody living anywhere else along the Bay – never mind Carteia - over a period of well over a thousand years might not have thought it a good idea to explore that huge chunk of Rock right in front of them. They could hardly miss it. Weren't they not at least curious?

And it wasn't as if Gibraltar was inaccessible. It was relatively easily to get to from the red sandy beach in the north east - the old mole area - or even from Rosia - the new mole area. As regards living on it, the north may have been steep and relatively uninviting but the south - Windmill Hill and Europa flats are as the name of the latter implies - pretty flat and easy to build on. There was nothing to stop people from settling there if they needed to or wanted to. And over a thousand years there must have been plenty of both reasons.

As regards Jewish arch construction, I think it was very eclectic and was influenced by just about every culture you can think of. In al-Andalus, they tended to copy the Moorish semi-circular type horse-shoe style with those distinctive side ornamentations. The example below is from the Ibn Shushan in Toledo, the oldest synagogue building in Europe.

But my main problem with possibility of the Nuns, Well having ancient Jewish origins is that I can find absolutely no evidence anywhere of any sort of pre-Tarik or even pre-12th century settlement in the southern part of the Rock."
...