2,620 Dead Babies in VAERS After COVID Shots – More Fetal Deaths in 11 Months than Past 30 Years Following ALL Vaccines as Scotland Begins Investigation 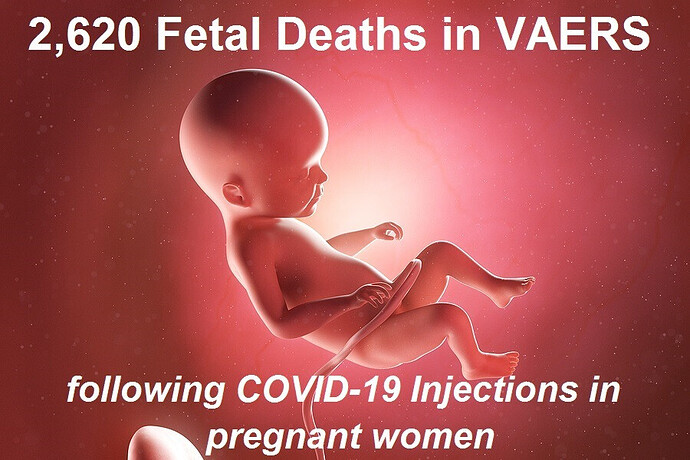 When we run the exact same search in VAERS and exclude the COVID-19 shots, we find 2,225 fetal deaths following ALL vaccines injected into pregnant women for the past 30+ years.

Last month (October, 2021) the New England Journal of Medicine admitted that the original study used to justify the CDC and the FDA in recommending the shots to pregnant women was flawed.

Since then, researchers in New Zealand have conducted a new study on the original data, and concluded:

The CDC and FDA recommended the shots for pregnant women, even though a correct analysis on the original data shows that 82% to 91% of pregnant women will suffer miscarriages if their unborn child is less than 20 weeks old.

And yet the CDC and FDA continue to recommend the COVID-19 shots, which now also include booster shots from Pfizer and Moderna meaning a pregnant woman can now be injected with 3 COVID-19 shots during her pregnancy (if it lasts long enough).

Of the 2,620 fetal deaths in VAERS following COVID-19 shots, 2,015 of these fetal deaths follow Pfizer injections, and 689 of them follow the Moderna injections.

VAERS is a passive system that is severely under reported. The CDC and FDA have never conducted a study to determine what this under-reported factor is, but independent scientists have, and we have previously published the analysis conducted by Dr. Jessica Rose, who has determined that a conservative under-reported factor would be X41. See: STUDY: Government’s Own Data Reveals that at Least 150,000 Probably DEAD in U.S. Following COVID-19 Vaccines

This means that there have probably been at least 107,420 fetal deaths following COVID-19 injections so far. And how many of these women will be able to get pregnant again?

How is this not headline news? Even in the Alternative Media, as far as I know I am the only one digging out these fetal deaths contained in the government’s own data following COVID-19 injections and publishing them.

And now it is being reported in Scotland that they are recognizing this spike in deaths in newborn babies, and they have launched an investigation to try to figure out why so many newborn babies are dying.

The Hearld in Scotland reports:

An investigation has been launched into a spike in deaths among newborn babies in Scotland.

Control and warning limits are designed to flag up to public health teams when neonatal, stillbirth or other infant deaths are occurring at unexpectedly high or low levels which may not be due to chance.

Although the rate fluctuates month to month, the figure for September – at 4.9 per 1000 live births – is on a par with levels that were last typically seen in the late 1980s.

Public Health Scotland (PHS), which is one of the bodies currently investigating the spike, said the fact that the upper control limit has been exceeded “indicates there is a higher likelihood that there are factors beyond random variation that may have contributed to the number of deaths that occurred.” (Full article.)

Do you think these public health officials in the UK will look at the COVID-19 shots being injected into pregnant women as a potential cause?

I seriously doubt it, but the Pfizer and Moderna mRNA shots are also being used in the UK, along with the AstraZeneca shot, and it is pure insanity not to consider these experimental injections as being linked to these infant deaths, and this should have happened months ago!

Here is a Funeral Director whistleblower in the UK explaining the increase in dead newborn babies they are now seeing. This is on our Bitchute channel.

Continued at link for sources and embedded videos including one with some very unfortunate gruesome examples of what these shots are doing to unborn babies. 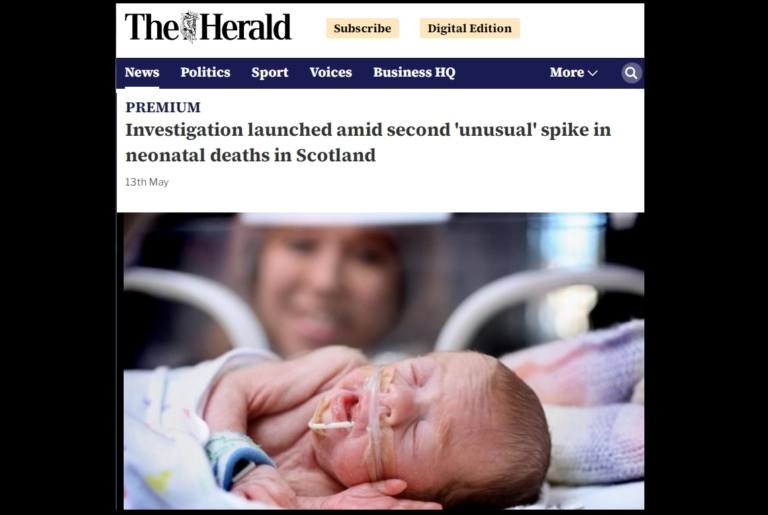 For many years we have reported how vaccines have been used as a means to control birth rates in an effort to reduce the world's population, especially in developing countries like many in Africa. In 2014 we reported how the tetanus shot was distributed in Kenya by the United Nations, but only given to girls and young women who were child-bearing ages, but not boys, and later it was discovered that these "tetanus shots" contained the HCG antigen which is used in anti-fertility vaccines. So it is no surprise to those of us who have been "anti-vaccine" for many years now and covering these issues, that the COVID-19 "vaccines" are causing the deaths of prenatal and neonatal babies worldwide to skyrocket, giving strong evidence that this is part of the efforts to reduce the world's population. The only thing that has changed, is that this effort to reduce the world's population is now happening in every country, including rich western nations, and not just in poor countries. In Scotland, it was just reported that an investigation into a "very unusual" spike in deaths among newborn babies in Scotland occurred for the second time in just six months. Spikes in infant deaths are also being reported from funeral homes, as this report from Australia cites whistleblowers who are too afraid to come forward and report this. As of the latest update to the U.S. Government's Vaccine Adverse Reporting System (VAERS) there have now been 4,154 fetal deaths reported following COVID-19 vaccines, a period of about 17 months. For the previous 30 years prior to the launch of the experimental COVID-19 vaccines, there were only 2,239 fetal deaths from ALL FDA-approved vaccines. And yet, the criminal FDA and CDC continue to recommend the COVID-19 vaccines for pregnant women.

Life or Death: Pharmaceutical “Plandemic” Poisonous Vaccines, or the Healing of the Holy Spirit – Your choi

The U.S. Government's Vaccine Adverse Events Reporting System (VAERS) was updated today, and there are now 4,534 fetal deaths recorded in VAERS following COVID-19 vaccines given to pregnant and child-bearing women. And these recorded fetal deaths are...