What about Gibraltar? BBC and Sky Silence Over March for Freedom Rolls Through London 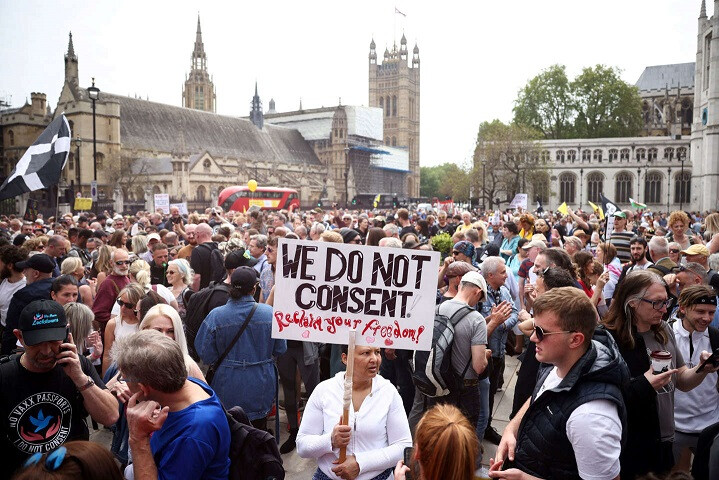 Article on The Truthseeker

On Saturday the 29th May 2021, up to one million people gathered in London to fight for their freedom, your freedom and your children’s freedom. Meanwhile the mainstream media remained silent throughout, except for a select few that have perpetuated barefaced lies.

If you were not in central London on the day of the event, or you are somebody who believes the only real news is what is reported on the BBC or Sky, then you could be forgiven for not even knowing that one million people marched through the streets of London against the medical tyranny that has infested the United Kingdom.

Or maybe you are one of those who has seen the select few reports in the mainstream media which describes the event as just hundreds of anti-vaxxers attending? If you are we can reliably inform you that you have been lied to. Because the event that took place in London on the 29th May 2021 was one of the largest protests the United Kingdom has ever seen in which millions from all walks of life attended.

What about Gibraltar? Was Clive Borrell the controlled opposition, as Lenin called it, to control and sabotage the Gibraltar protest movement?

The best way to control the opposition is to lead it ourselves." ― Vladimir Ilyich Lenin. Ever wonder why nothing ever changes? Two words: Controlled Opposition.

The silence from BBC News and Sky News is deafening after up to 1 million...

On Saturday the 29th May 2021, up to one million people gathered in London to fight for their freedom, your freedom and your children’s freedom. Meanwhile the

London, May 29th: Something wonderful, something real . .

London, May 29th: Something wonderful, something real . . .

by Steve Cook Yesterday saw the another warning shot across the bows of the globalist front group that has hijacked the nation’s governance: knock off  what you are doing – or else! The…

Corporate Media is dead; it has been supplanted by the People’s Media which operates free of corporate/oligarchical control.

Thanks to the wonders of modern technology, it is now easy to prove what REALLY took place and show the Corporate Media up as resoundingly false.

What is occurring as our already considerable numbers grow, is a seismic shift of public opinion in a direction OPPOSITE to the direction in which the CMM, leaving no truth unturned, is trying to steer it.

Gibraltar definitely needs a seismic shift of its own to battle the secret fascists calling the shots on The Rock.

Why doesn't corporate media report the Truth? Look who they get their marching orders from -

• Rupert Murdoch who owns the biggest vaccine company in Australia. His family has been deeply immersed in that industry for generations, and he has partnerships with Glaxo and with all the big vaccine makers.

What does the Government Media push in Gibraltar?