As boosters that have not been tested on humans are being rolled out across the country, a new study indicates that the jab is far more dangerous than COVID-19 itself. And the CDC has provided false information regarding their tracking of adverse...

As boosters that have not been tested on humans are being rolled out across the country, a new study indicates that the jab is far more dangerous than COVID-19 itself. And the CDC has provided false information regarding their tracking of adverse events linked to the vaccines.

As government officials and mainstream media urges the vaccinated to inject a second so-called “bivalent” booster said to be targeting the Omicron variant, it turns out that this substance hasn’t been tested on humans. And the only animal trial that has been performed included eight mice.

“It hasn’t been proven in a clinical trial, because we don’t have time to do a clinical trial because we need to get the vaccine out now because we have such a situation throughout the world and certainly in the United States, we’re having 400 deaths per day and up to 5,000 hospitalizations a day,” NIAID Dr Anthony Fauci explained in an interview.

CDC Director Rochelle Walensky has also stated that the boosters must be expedited in order to work properly. A delay would potentially render the shots “outdated” as new variants would form, Walensky argues.

STUDY: WORSE THAN THE VIRUS

A new study conducted by scientists from Harvard and Johns Hopkins, currently in pre-print, reveals that the COVID-19 vaccines were up to 98 times worse than the virus itself. The study is critical of the booster requirement for American university students, stating in the abstract: “Using CDC and sponsor-reported adverse event data, we find that booster mandates may cause a net expected harm: per COVID-19 hospitalisation prevented in previously uninfected young adults, we anticipate 18 to 98 serious adverse events, including 1.7 to 3.0 booster-associated myocarditis cases in males, and 1,373 to 3,234 cases of grade ≥3 reactogenicity which interferes with daily activities.”

As first reported in the Epoch Times, CDC has provided false information regarding their tracking of adverse events caused by the vaccines. At the same time, Walensky admits that there is a causal relationship between the mRNA vaccines and myocarditis:

In a letter dated September 2 from CDC Director Rochelle Walensky to Senator Ron Johnson, the director states that “CDC consistently performs extensive data collection and analysis to detect potential adverse events and safety signals and then communicates this information to the public. For example, VAERS staff conducted assessments showing that causal associations exist between thrombosis with thrombocytopenia syndrome and Janssen’s COVID-19 vaccine and between myocarditis and mRNA COVID-19 vaccination.”

In the same letter, Walensky also stated that the CDC did not analyze certain types of adverse event reports whatsoever in 2021, despite having previously stated that they did start this tracking in February of that year.

Paul Craig Roberts - The Collapse of the Covid Narrative |

Project Veritas, the greatest truth-teller of our time, records Jordon Trishton Walker, Pfizer Director of Research and Development, Strategic Operations mRNA Scientific Planner, while he describes Pfizer’s complete capture of its regulatory agencies and Pfizer’s plan to mutate viruses so that Pfizer will have endless profits from selling vaccines.

This admission is scandalous. Don’t expect to hear about it from the whore media. Don’t expect Congress to put its political campaign donations from Big Pharma at risk by investigating. Big Pharma and its federal regulatory agencies’ crimes against humanity will continue unabated.

You can watch the video of the confession here: Project Veritas has broken Pfizer's Gain-of-Function Research Program Wide Open. which includes a transcript. 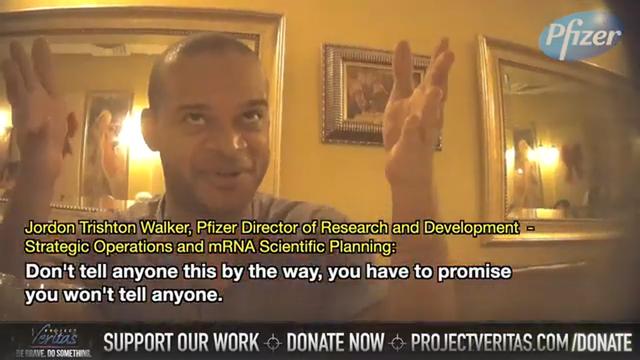 “Devoid of empathy. Avarice its purpose. It’s face glowing with joy, oblivious to the profound human tragedy it enables, reveling in the damage wrought to the web of humanity and the structure of a nation. Oblivious to the horror embodied in its words, in the very fabric of its language. Possessed by a deep belief in its own entitlement. Oozing dizzy narcissism. Celebrating corruption. Completely devoid of wisdom, introspection or self-awareness of the fundamental perversion of its soul.

“A senior emissary from an immoral corporation, which courts have defined as having rights formerly restricted to human citizens, and which chronically preys and feeds on human suffering. A corporation which shrugs off massive fines for illegal activities as just another inconvenience, a mere business expense.

“Look deeply into the face of this ambassador from another world, listen carefully to these worlds. This is how we got here. This is the culture that has given us this global human tragedy.

While America’s Big Pharma servant and marketing agent, the US Food and Drug Administration, approves and helps to market Covid jabs for babies, thus causing for the first time in history heart attacks in babies, the British Government has ended Covid vaccine boosters for people under 50.

The UK government could not reject the recommendation from the Joint Committee on Vaccination and Immunization to end the booster campaign for most of the age group. The reason–a cover up– seems to be that no one with any sense any longer wants a booster so the program is not economically efficient. But the program continues for “high risk persons” and “to protect the National Health Service.” UK Government Ending COVID-19 Vaccine Boosters for Healthy People Under 50

A recent US poll revealed that 48% of the respondents think the excess deaths and sudden deaths are explained by the Covid vaccine. 35% think not, and 28% know someone who died after vaccination.

So dear readers, the American pharmaceutical industry, American politicians such as Joe Biden and your own politicians, two-bit punk corrupt medical bureaucrats such as Tony Fauci, the whore media, corporate medicine, your corrupt employers, your schools and universities, and airlines, and military, and hospitals, have coerced you to be injected with a deadly substance. Excess deaths following the “vaccination campaign” are off the charts. Fertility is collapsing. And there is no evidence of any benefit of the “vaccine.”

“No Evidence of any Vax Benefit”. Covid Vaccine “Makes The Problem Worse”.

Here is Dr. Fleming testifying under oath that Covid is a bioweapon created by the US Government: 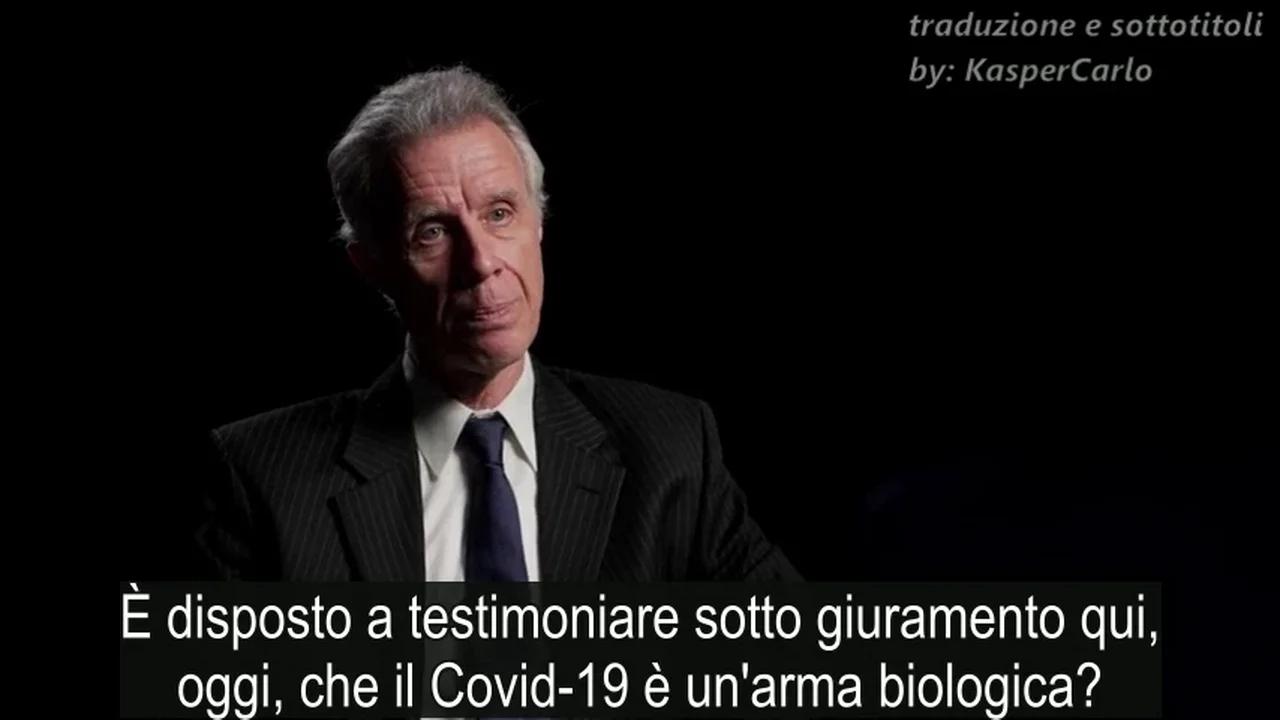 Are you going to do anything about it?

Or will you sit there sucking your thumb while you fall for the next deception, and the one after, forever?

MIT professor Retsef Levi, who serves as co-director of Leaders for Global Operations Program, is widely regarded as one of the leading experts in risk management in the health field.

In a newly released video, Levi is calling for the immediate suspension of all COVID-19 messenger RNA vaccines. His recommendation is based on supporting evidence that shows vaccines have “completely failed” and cause an “unprecedented level of harm.”

The video has already received over 1 million views at the time of this report. WATCH: 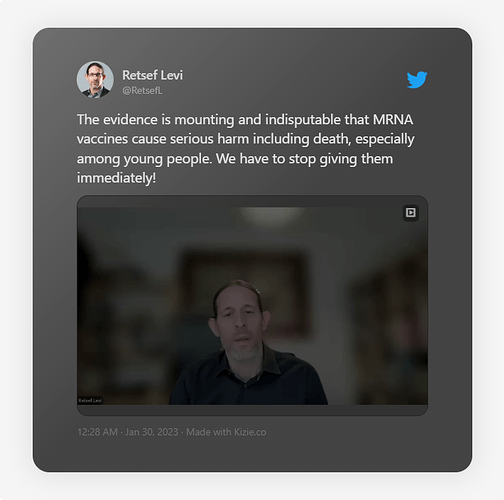 “I’m filming this video to share my strong conviction that at this point in time, all COVID mRNA vaccination program[s] should stop immediately,” Levi said.

Levi said he believes the vaccines have “completely failed” in terms of their efficacy. He also noted there is “mounting and indisputable” evidence that vaccines cause an “unprecedented level of harm.”

Levi mentioned that even death has occurred as a result for young people, although it is rare.

More on this story via Western Journal:

Various studies have shown the vaccines to carry a greater risk of complications than initially expected, albeit not to the degree Levi indicated.

For example, shortly after the vaccines were introduced to the public, the Johnson & Johnson and AstraZeneca shots were found to cause vaccine-induced immune thrombotic thrombocytopenia, a blood-clotting condition, in roughly 1 in 26,000 to 1 in 127,000 people, most of whom were young women.

Most public concern over the vaccines, however, comes from another rare yet serious side effect found in the Moderna and Pfizer mRNA vaccines: myocarditis. These side effects are found most often in young adult and adolescent males, according to the Centers for Disease Control and Prevention.

Some experts believe the severity of these side effects has been downplayed by health authorities. 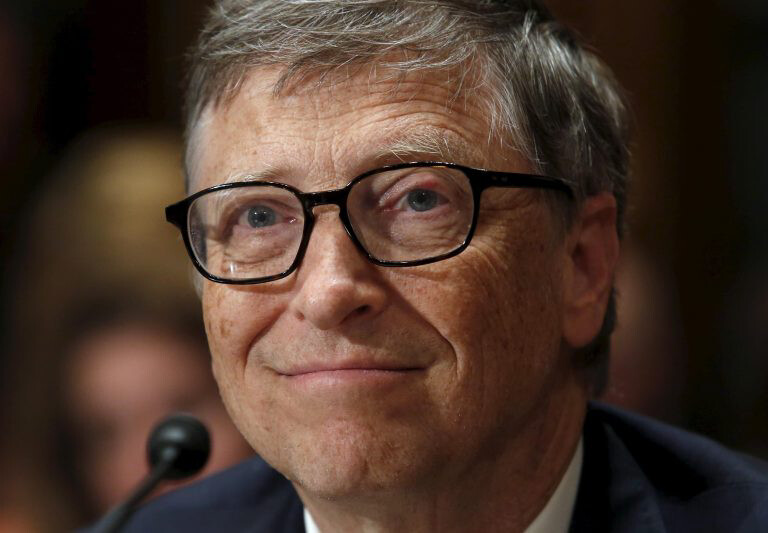