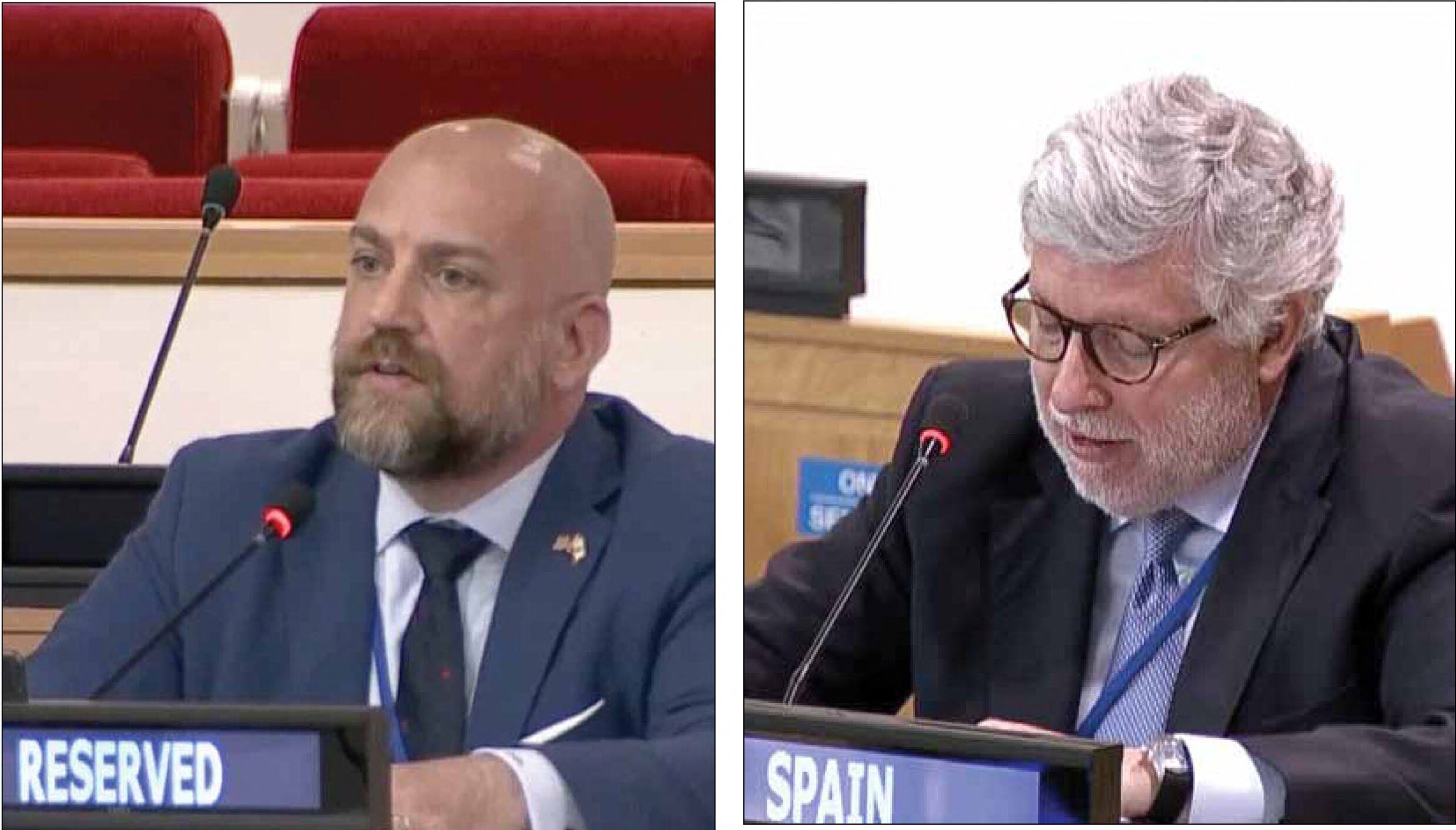 UN reminded of Gibraltar’s right to self-determination, as UK acknowledges...

Prime Minister Boris Johnson thanked his Spanish counterpart, Pedro Sanchez, on Monday for Spain’s “pragmatic approach” ahead of talks on a UK/EU treaty for the Rock’s future relations with the bloc. The two men met in Brussels on the sidel...

Prime Minister Boris Johnson thanked his Spanish counterpart, Pedro Sanchez, on Monday for Spain’s “pragmatic approach” ahead of talks on a UK/EU treaty for the Rock’s future relations with the bloc.
The two men met in Brussels on the sidelines of a NATO Summit and discussed Gibraltar during a wide-ranging bilateral meeting that touched on everything from the environment and sustainable development to Covid-19 and defence matters.
The meeting came just hours before the annual session of the UN decolonisation committee, the Committee of 24, during which Gibraltar’s representative in the US, David Liston, said citizens in Gibraltar and the Campo de Gibraltar would “benefit enormously” if the UK and the EU reached a deal for the Rock’s post-Brexit relations with the bloc.
During the session in New York, Mr Liston described how the Covid-19 pandemic had “fostered close cooperation” between Gibraltar and Spain, adding that after Brexit, the focus was now on securing an enduring framework for cross-border relations.
In doing so, however, he reminded the UN that Gibraltarians were “a unique population” that had the right to determine their own future, urging the committee’s members to visit the Rock and see that for themselves.
The committee is usually addressed in person by the Chief Minister, who travels twice every year to New York to set out Gibraltar’s position before the UN.
But the restrictions of Covid-19 meant that this year, the committee was addressed by Mr Liston, who is based in New York and whose grandparents, Edward and Mary Guerrero, were born in Gibraltar but emigrated to the US in the 1920s.
Ahead of the speech at the UN, the UK Government said Mr Johnson and Mr Sanchez had discussed their “shared commitment to deepening the already strong” UK-Spain bilateral relationship across “a huge range of issues” including trade, defence and security. They also said they would continue to work together to tackle Covid.
“They agreed that the political agreement on Gibraltar, reached on 31st December, provided a framework for a future agreement with the EU and the Prime Minister thanked Prime Minister Sanchez for his pragmatic approach on this issue,” the UK Government said in a statement.
“The leaders also agreed that the UK and Spain both have a role to play in bringing prosperity to the whole region.”

GIB INVOLVED
Negotiations between the UK and the EU have yet to commence, with the European Commission still working on the bloc’s negotiating mandate for the talks despite initial hopes that the deal would be concluded by the end of June.
The European Commission has not made any statement as to the reasons for the delay, which comes against the backdrop of strained relations between the UK and the EU on the implementation of the Northern Ireland protocol.
That issue was raised too during the UK/Spain meeting yesterday, with Mr Johnson telling Mr Sanchez that “a constructive way forward needs to be found which preserves both the Belfast (Good Friday) Agreement and the territorial integrity of the UK”.
Mr Sanchez was the first to reveal the talks with the UK, stating on Twitter: “This morning I met with the UK PM, @BorisJohnson. We discussed the need to further strengthen bilateral relations, enhancing areas such as security and defence, and to promote the agreement between Spain and the UK on Gibraltar.”
In Gibraltar, the Gibraltar Government said Chief Minister Fabian Picardo and Deputy Chief Minister Dr Joseph Garcia had been aware of the UK/Spain meeting and had worked with officials from the Foreign, Commonwealth and Development Office to prepare a common position should Gibraltar be raised.
“The meeting covered a number of different areas in relations between the UK and Spain and other international issues,” No.6 Convent Place said, adding: “It was not specifically about Gibraltar.”
“The issue of the ongoing preparations for the negotiation of the UK / EU Treaty on Gibraltar was, however, expected to be raised by both sides in an encouraging positive spirit of optimism, reflecting on the ongoing preparatory work being undertaken by all parties to the upcoming negotiation once the EU mandate therefor has been settled.”
Mr Picardo added: “I am happy that Gibraltar was raised in keeping with our expectations and the work we have been doing, to point optimistically towards the negotiation to come between the UK and the EU to deliver on the New Year's Eve Framework Agreement.”

UN SESSION
During his address to the Committee of 24, Mr Liston sketched out Brexit developments relating to Gibraltar, which left the European Union alongside the UK on December 31, 2020.
He described the tax treaty and the framework agreement reached for a UK/EU treaty on Gibraltar’s future relationship with the EU, and how it built on earlier cooperation in areas such as tobacco, the environment, law enforcement cooperation and citizens’ rights.
“These symbols of cooperation have helped reduce the understandable mistrust that has built up for decades between Gibraltar and Spain,” Mr Liston said.
“The Government of Gibraltar very much hopes that a new treaty can now be concluded.”
Mr Liston reminded the committee of Gibraltar’s economic contribution to the Campo.
He said some 15,000 people in the Campo – mostly Spanish citizens – worked in Gibraltar, which also imported $1.8 billion worth of goods from Spain annually and accounted for 20% of the neighbouring region’s GDP.
“The interests of citizens and business on both sides of the border would benefit enormously from the security provided by a new treaty,” Mr Liston said.
“They would also benefit from a fluid border [and] this would sow the seeds for an area of even greater prosperity on both sides.”
There was no update for the committee, however, on the progress toward that treaty.
As is common in every annual speech to the UN, Mr Liston underscored the right of the Gibraltarians to decide their own future.
He described the origins of Gibraltar’s modern community and said the Gibraltarians had been “…shaped by more than three hundred years of existence into the thriving and modern country of today.”
“Our ancestors have inhabited the famous Rock of Gibraltar before the United States, Italy or Germany existed as nation states,” he said.
“We are a combination of different identities and nationalities who have been moulded through time into the Gibraltarian of today, a unique and indivisible people in our own right.”
Mr Liston said this “melting pot” of people’s and cultures had evolved into a unique identity transformed by the inward movement of people into Gibraltar, a characteristic chared with many members of the UN.
“We are a people separate and distinct – ethnically and culturally – from the administering power,” he said.
“A people that, despite its diverse origins, has lived harmoniously for hundreds of years in a country that is barely twice the size of Central Park.”
“And all we ask, madame chairman, is for the opportunity to exercise the right to self-determination, like many of the countries represented here today have done before us.”
And he later added: “In the times in which we live there can be no other way.”
“This is no longer 1704 or 1713. This is 2021 and today what matters are the wishes of people to decide their own destiny in the international order.”
“We cannot redraw the boundaries of the world based on what Europe looked like 300 years ago. What’s done is done.”
“We need to look forward into a future where dialogue and cooperation replace conflict and confrontation.”
Mr Liston repeated Gibraltar’s long-standing invitation to the Committee of 24 to send a fact-finding mission to the Rock, an offer the UN has so far never taken up.
“Come to learn more about this new situation at first hand,” he said.
“Speak with the people whose protection is the sacred duty of this Committee. Learn about our legitimate aspirations to determine our own future.”
“I urge you once again, as prior delegations from Gibraltar have urged you year after year, to send a visiting mission.”
“More than any words I utter here today, your meeting the people of Gibraltar will convey the character of a unique people, a people who cherish the right of self-determination, who treasure their separate and distinct identity, and who love the land they have called home for over 300 years.”

SPANISH SUBMISSION
There were few surprises in the Spanish submission to the Committee of 24, which was delivered by Madrid’s Permanent Representative to the UN, Agustín Santos Maraver.
But there was a telling absence too of the some of the acidic rhetoric aimed at Gibraltar of submissions in previous years.
In addressing the committee, Mr Santos outlined Spain’s traditional position on sovereignty, sketching out a snapshot of Gibraltar’s history through the prism of Madrid’s view on territorial integrity.
The UK, he said, was failing to abide by UN resolutions calling for a “negotiated decolonisaton” of the Rock, not just what was ceded under the Treaty of Utrecht but the “illegally occupied” isthmus too.
“What Spain is asking for is the full compliance of what the UN has stated, to start negotiations with the UK with a view to ending thus colonial situation,” he said.
“And today we reiterate that once again.”
But while the Spanish position on sovereignty remained unchanged, there was no attack on Gibraltar in issues such as tobacco and tax, as has occurred in other years.
Instead Mr Santos acknowledged efforts to find agreement on practical issues of contention, including the Memorandums of Understanding reached during the Brexit Withdrawal Agreement “which remain in force and which we hope will contribute to improving relations in the region”.
He also referred to the New Year’s Eve framework agreement which he said would serve as the foundation for a future agreement between the UK and EU on Gibraltar.
“The aim of that agreement is the creation of a zone of shared prosperity,” he said.