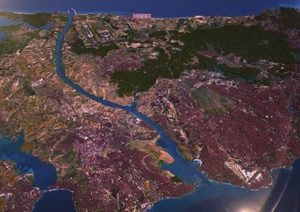 The government of Turkey announced plans on Saturday to move ahead with construction of a controversial new shipping canal linking the Black Sea with the Mediterranean Sea, intended to take pressure off the existing Bosporus.

Canal Istanbul would run for 28 miles, although about one-third of that distance would run through existing natural waterways. Turkish leaders say the enormous public works project would pay for itself through fees charged to ships using the new pathway. "With the Canal, Turkey will be among the world's leading logistics powers.

Despite those plans, critics have said for years that the government has over-estimated ship transit revenues and would likely face steep challenges in financing the work, due to environmental impacts like displacing residents currently living on the land and destroying two of the city’s precious water reservoirs.

Turkish President Recep Tayyip Erdogan on Saturday launched the start of construction on a controversial canal aimed at easing congestion on the ...