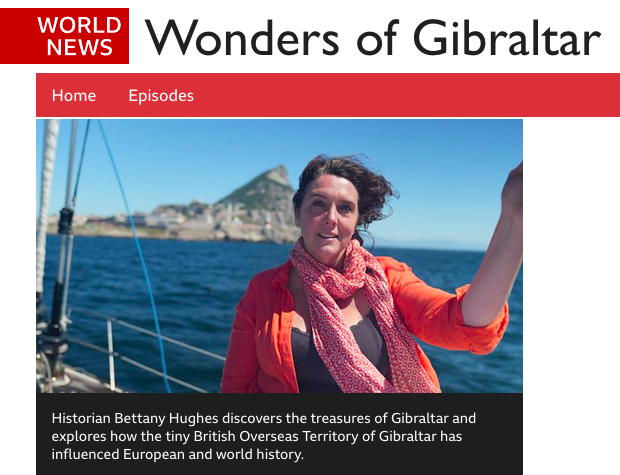 Historian Bettany Hughes discovers the treasures of Gibraltar and explores how the tiny British Overseas Territory of Gibraltar has influenced European and world history.

There are few places on Earth with as much of an outsize influence on world history as the small British Overseas Territory of Gibraltar. The peninsular may just be 2.5 square miles, but this iconic rock has loomed large on the human imagination since pre-history. Inside the rock itself, Bettany explores the incredible, subterranean, secret, Stay Behind Cave, where Ian Fleming, creator of James Bond, masterminded a remarkable plot - to leave six men, walled in, as human transmitters of intelligence should the Nazis invade Gibraltar. On the end of a rope, squeezing through narrow caves, Bettany discovers messages left by Victorian officers in Leonora’s Cave and witnesses the colourful natural formations of the underground pleasure gardens. In the Garrison Library, Bettany handles the first report of Admiral Nelson’s death in the Gibraltar Chronicle. She also gets stuck inside a 'Moorish' tunnel and comes face to face with a cheeky Barbary Macaque monkey.

More Treasures of Gibraltar – His Rock of Defence.

An amazing documentary about an amazing place.

Treasures of The Mediterranean

The next episode in Bettany Hughes series also features Gibraltar and Gorham's Cave. 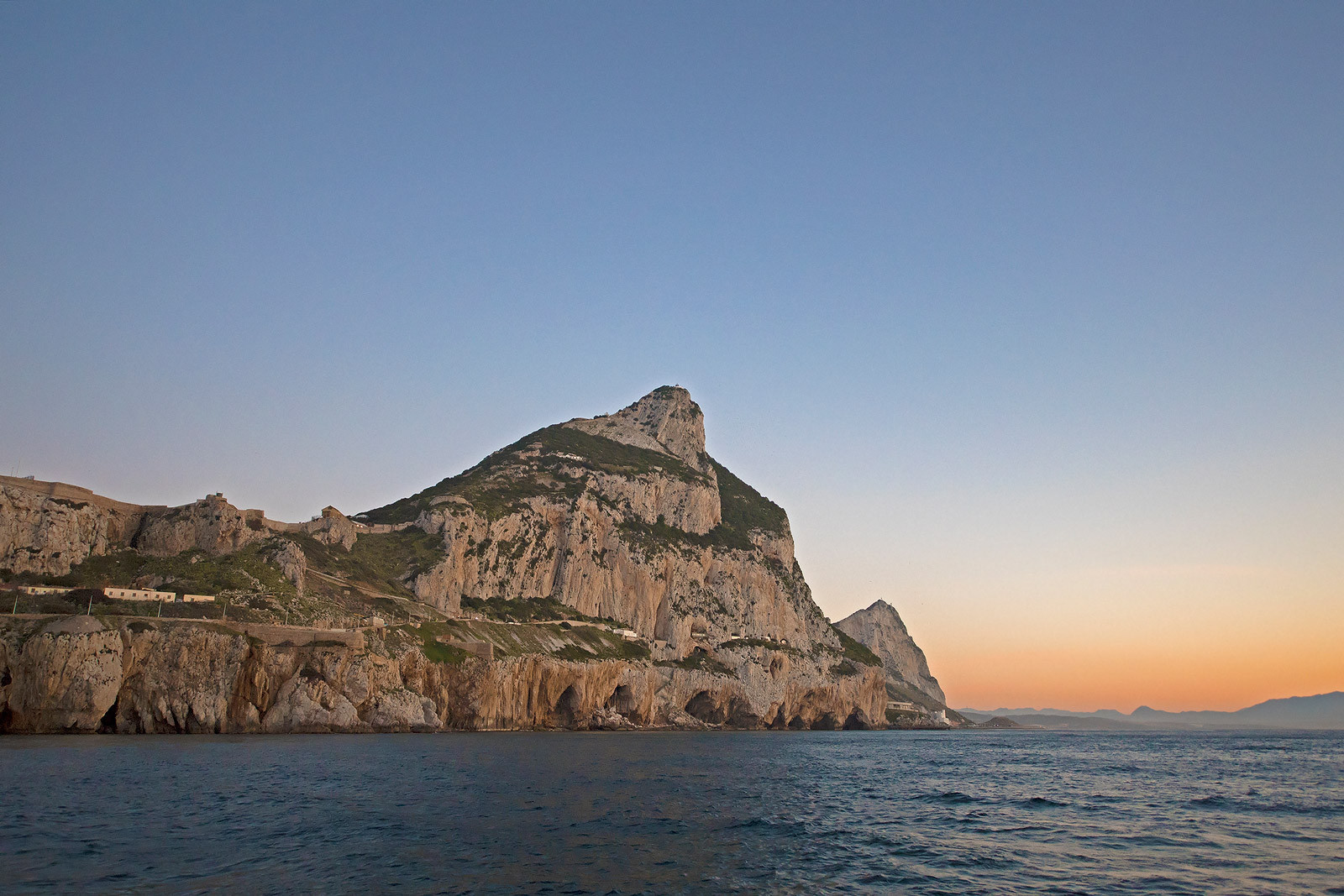 The Gorham’s Cave Complex is of major significance in understanding the global story of human evolution and adaptation.

Thank-you. Viewing this video has some issues. Due to YT's restrictions, I had to use and change to a VPN location that would allow viewing and even then with some required user agreements. YT is not a free-speech, uncensored platform. It is highly regulated. I will attempt to download the featured video and upload it to another platform. Looking forward to viewing it.

Another alternative can be found here: 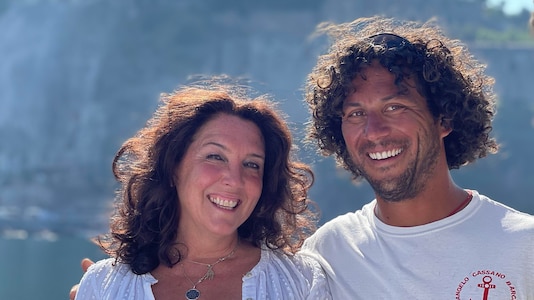 Bettany visits Gorham's Cave on Gibraltar, known for the mask of Medusa

Yes, the show might have restrictions, but anyone really interested should be able to find a source to watch them. The original link above now is also restricted. And the person who put them on YT, left out Gibraltar's episode (strange).

Bettany has done a nice job, and she is very charismatic.

It's too bad they all ignore Gibraltar's Biblical History and instead focus on mythology.

For instance, in the episode on The Mediterranean, she discusses Medusa in Gorham's cave, and how people used to leave her gifts so that she'd provide protection.

The Biblical History is that Teia Tephi, who made her way with Jeremiah The Prophet to Gibraltar, via Egypt, put an end to false god worship. They accepted her as Queen of Gibraltar and gave her Neptune's trident signifying the end of their idol worship.

Jeremiah’s group soon arrived at Gibraltar, the Gate, the Rock with a lion’s shape. There Teia Tephi was proclaimed queen, by the Gadite* Israelites who had settled there and the Rock itself even cried out her name, itself acknowledging her as its queen. Teia found many of the inhabitants worshipping Melcarth / Neptune and condemned them for their idolatry. There was an idol of Neptune at a shrine to him and the idol held a golden trident in its right hand, which Elier the ruler of Gibraltar ordered to be taken from the idol and be given to Teia Tephi to go with the Olive-sprig she had brought with her from Jerusalem. During a struggle with the priests to remove the trident, the idol was smashed in two – THE STORY (in brief) of Tephi, queen of Tara and Gibraltar.

6:2 Then drifting in calms to southward, we drew towards the Pen of the Cape Of the Rock that keepeth the sea-gate and weareth a lion's shape (Gibraltar)
And watcheth both Phut (Africa) and Eber (Iberia), and inward keepeth the sea, And outward the endless waters that storm it eternally (the Atlantic - (Sura 52:6)
In kingly strength it arises hoary and huge, the crown
Of the pilot's hope who gazes. Thither the ships go down
And may not avoid the watchmen. Narrow the sea-gates are (Matt. 7:13-14),
And Javan and Tarshish stand where Canaan holdeth the bar.
Their peddlers must barter hardly with those from the outer deep
For ivory, apes and gold and tin, with grain and wool of the sheep;
For Canaan found her pathways and hid them from men's desire,
And the spoils of all outer peoples have builded the Fanes (Sura 52:4) of Tyre
Which shall fall, even now are falling (Eze. 27). The daughter of Zidon is low.
Is her assault not recorded, her nakedness, shame, and woe (Eze. 26)?
6:3 Yet here was her mother her bondslave, cleansing her Gate of the West
[The Fane] 'Neath the Pen of the foot of Eber, and receiving therein her guest;
For a strong caer Zidon builded, and called it by Melcarth's (Neptune's) name,
And GAD and Simeon were with her when into that cape we came
Under Elier the son of Ziza, who had knelt at Melcarth's shrine,
But was circumcised in his fathers, and cursed not the Name Divine (YHWH),
And knew the teaching of Moses, and ruled by The Book of The Law,
And yearned unto Jacob/Israel and David and that which their souls foresaw.

One of Teia Tephi's (the real Britannia) props to identify her is Neptune's trident. 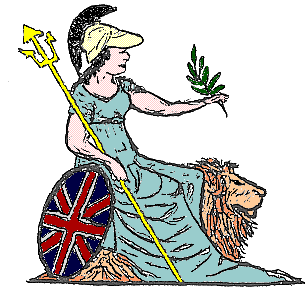 These two letters are "aleph" and "tau", and in the original Hebrew alphabet aleph appears as a diagonal cross (x) and tau as an upright cross (+). Thus, when combined as a symbol to express the idea of the Eternal God, they would appear like the protective mark referred to above, which is identical with the crossed cross of Britannia's shield (Britannia symbolises the ancient sixth century B.C. "War Queen of Ireland" - queen Teia Tephi holding the Olive from Jerusalem and the Trident she took from Neptune's Porch (Gibraltar) on her way to Ireland); the flags of the Celtic / Israelites in Northern Spain and Christ's flag the Union Jack. – The Lia Fail - Bethel Stone

It's too bad they all ignore Gibraltar's Biblical History and instead focus on mythology.

Agreed. That is the way of the world unfortunately. The Truth is much more interesting!