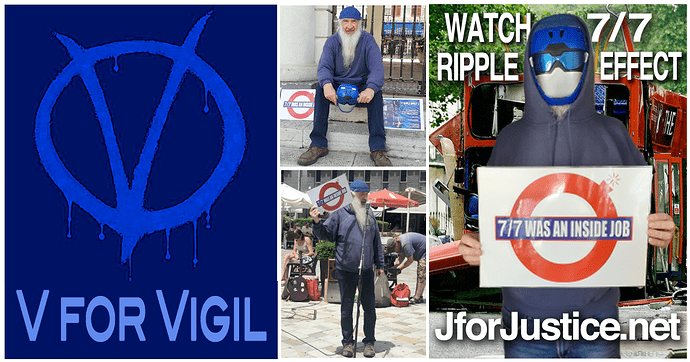 Former Principal Intelligence Analyst for the South Yorkshire Police, Tony Farrell is featured in the latest online edition of Gibraltar Messenger . This edition highlights his “V for Vigil” campaign held on July 7th, at 14 Key Stations around The Rock of Gibraltar.

The Vigil’s purpose was to bring awareness to Gibraltar, on its 15th anniversary, that “7/7 was an inside job”.

Gibraltarians may have seen him walking the streets in his blue Power Ranger mask or engaged with him at one of the 14 stations/locations he stopped at to hold up his banners of truth.

Tony Farrell Stationed in Gibraltar With Banners of Truth on Gibraltar Messenger, which includes additional information about Tony Farrell’s background at https://gibraltar-messenger.net/#TFV.

To learn more about his Vigil, read his report on his website:

V for Vigil – 7/7 Stations of King’s Cross at http://jahtalk.thefarrellreport.net/77-stations-of-kings-cross/.