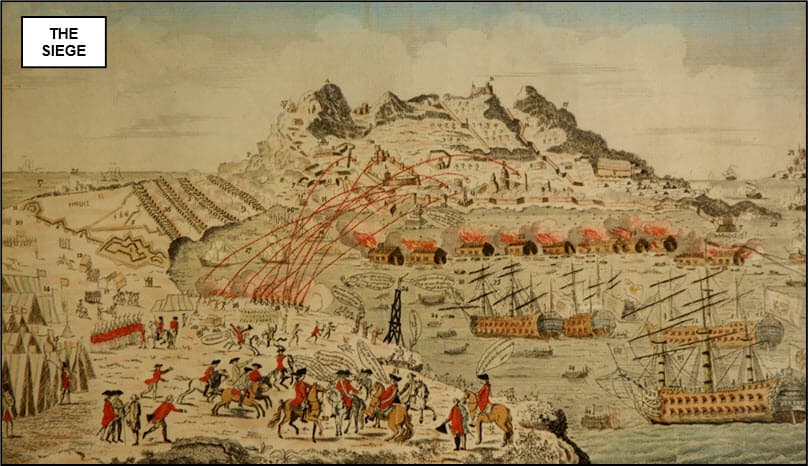 The Great Siege of Gibraltar (the fourteenth and last military siege of Gibraltar), was the longest (3 years & 7 months) and most famous of Gibraltar’s sieges. It was an unsuccessful attempt by Spain and France to capture Gibraltar from the British during the American War of Independence which broke out in 1775.

On 16 June 1779 Spain entered the war on the side of France and as co-belligerents of the rebellious American colonies — the British base at Gibraltar was Spain's primary war aim. The vulnerable Gibraltar garrison under George Augustus Eliott was blockaded from June 1779 to February 1783, initially by the Spanish alone, led by Martín Álvarez de Sotomayor. The blockade proved to be a failure because two relief convoys entered unmolested — the first under Admiral George Rodney in 1780 and the second under Admiral George Darby in 1781— despite the presence of the Spanish fleets]. The same year, a major assault was planned by the Spanish, but the Gibraltar garrison sortied in November and destroyed much of the forward batteries.

The Great Siege of Gibraltar: 1779-1783 France & Spains Failed Attempt To Take The Rock Gibraltar is small bit of land, but it is full of history; it is a little under 3 square miles in area, with most of that taken up by the great Rock of

From The Gibraltar National Museum -

The Great Siege of Gibraltar

With The American War of Independence raging, France and Spain saw an opportunity to take advantage of Britain’s stretched forces. They allied themselves with the Americans and declared war on Britain. Their plan was to firstly capture Gibraltar,...

Is Gibraltar British or Spanish?

Beautiful Britain : On This Day in history

Spain declared war on Britain, and the Great Siege of Gibraltar began. In February 1783 the siege was lifted and the French and Spanish troops retired, disheartened and defeated, after three years and seven months' conflict. The final peace treaty left Gibraltar with the British, but the victorious British garrison sustained a loss of 1,231 men, and expended 8,000 barrels of gunpowder.

On This Day - events from British history : 16th June