The WHO Endorses List of Potential Adverse Effects of Jabs

100% of DEATHVAX™ Recipients Have Heart Damage

Pfizer knew. Bourla knew. Fauci knew. Birx knew. The CIA knew. The DoD knew. The WHO knew. The WEF knew. The UN knew. Everyone involved in PSYOP-19 knew, well before the virus was intentionally “leaked”in order to justify the slow kill bioweapon.

Pfizer knew. Bourla knew. Fauci knew. Birx knew. The CIA knew. The DoD knew. The WHO knew. The WEF knew. The UN knew. Everyone involved in PSYOP-19 knew, well before the virus was intentionally “leaked”in order to justify the slow kill bioweapon.

The plan was always to slowly disclose the truth about this bioterror eugenics program. Birx was the first to be tapped on her shoulder: 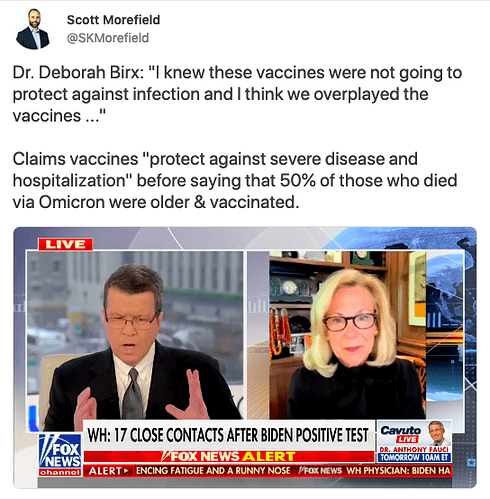 And now it is the WHO playing its part: 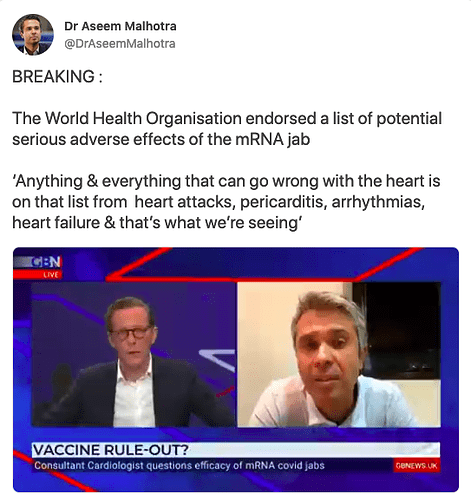 Talk about a total about-face.

All by design, such that the genetically modified humans (GMH) that have to date survived their heart damage and VAIDS slowly start awakening to what was done to them. At some point these GMHs may turn on the very governments and institutions, and the One World Government’s assets like the WEF may then swoop in with their Great Reset “solution” to the very problems that they caused.

Tragically, all of these adverse events will go increasingly parabolic over time.

The likes of the WHO are now unable to deny the depopulation and diseases that they have caused with their DEATHVAX™ campaigns. In the coming months expect the CDC, FDA, BigPharma and the very governments that pushed for these eugenics injections to start admitting the horrific truth.

Vax Analyst Warns 'Something Horrible Is Going On' And 'The Longer They Ignore It, The More Criminal It Is' - The Blood Of Millions Of Vax Injured And Dead Is On The Globalists Hands

That Awkward Silence Is The Vaxxed Realizing The Purebloods Were Right

According to this recent story over at the Washington Post, 'vaccine hesitancy' has led to a resurgence of diseases such as chickenpox and measles in the US as parents of young children, who've seen the growing tidal wave of injuries and deaths in the 'COVID vaxxed,' decide to put off all vaxxes for their kids.

With one doctor who was quoted within the story warning of a growing measles outbreak in Ohio "that (vaccine hesitancy) is what is causing this outbreak to spread like wildfire," as we'd warned on ANP in this December 28th story, the globalists 'talking head propagandists,' called the mainstream media, is trying everything they can to deflect attention away from the truth about all of these vax injuries and deaths and the fact that more and more evidence keeps emerging that the immune systems of the vaxxed have been heavily compromised.

And with the UK's Sir Christopher Whitty, a British epidemiologist and Chief Medical Officer for England and Chief Medical Adviser to the UK Government since 2019, recently warning thousands of middle-aged people are dying of heart conditions that went untreated during the Covid pandemic as patients missed out on statins and blood pressure pills, with Whitty actually confirming all of the 'excess deaths' being experienced around the world following the jab rollout by claiming that in the UK, 800 more people are dying each week over 'normal levels,' he still neglected to address 'the elephant in the room - the jabs.'

With Whitty blaming all of those excess deaths upon 'heart conditions that went untreated during the pandemic,' claiming people missed out on their 'big pharma medications,' Whitty too is trying to shift the blame for all of those excess deaths away from the big pharma mafia and the mandated vax program that was rolled out around most of the world, while in the videos at the bottom of this story we get a much more realistic explanation of this exploding problem from analyst Ed Dowd who warns us bluntly: "'Something Horrible Is Going On': The Longer They Ignore It, the More Criminal It Is."

As Dowd also recently warned Mike Adams during an interview with him, the numbers show that every day, 7,500 Americans are being killed or disabled by the jabs, the huge majority of them 'working Americans' who are rendered no longer able to do their jobs correctly, what Adams calls the 'decivilization' of America unfolding before our eyes with most too blind to see it. From that story.:

Ed Dowd, author of Cause Unknown (available at BrighteonBooks.com and other book resellers) joined me for an interview last night to share updated — and slightly horrifying — numbers about post-vaccine excess fatalities and excess disability claims.

The short version of that conversation is that each day in America, there are about 2,500 excess deaths and 5,000 excess disability victims due to covid-19 vaccines. This means, on average, about 7,500 Americans are removed from the potential labor pool each day. Granted, not all 7,500 are currently working, but most of them theoretically could contribute to the work force if they chose to.

Our conversation goes way beyond the mere numbers, however. We look at the macroeconomic implications of this daily removal of 7,500 people from the potential labor pool and what it means for America’s economy and military security, among other things. To hear the full conversation, listen to the interview below. (ANP: 3rd video at the bottom of this story.)

The decivilization of the USA

One of the more startling realizations in all this is that the United States of America is suffering the early stages of a “decivilization” event, not merely a temporary bump in the road. That term refers to the dismantling of the critical, complex pillars of a modern advanced civilization, rendering it unable to function.

The sudden collapse of Southwest Airlines’ flight schedule now being witnessed across the country is an excellent example of this. Here’s an airline company that can hardly fly planes because it can’t schedule its own crew members to show up. Reportedly, Southwest Airlines failed to invest in its IT systems and after “years of neglect,” the crew scheduling systems have cratered. Now the airline has cancelled more than 10,000 flights and may not survive much longer as a viable business entity.