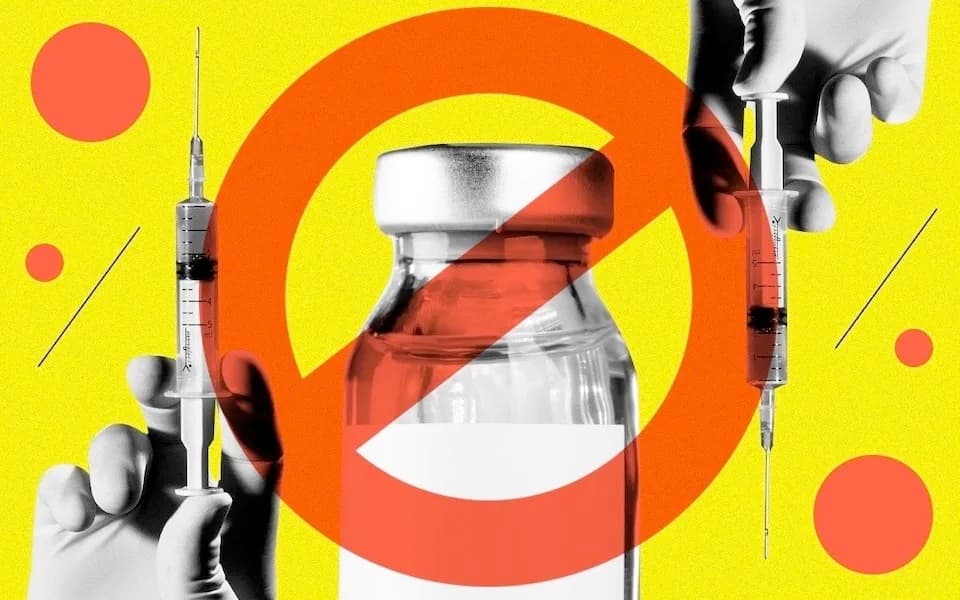 BREAKING: The MSM Now Have No Choice But to Admit that the DEATHVAX™ is Deadly

Another day, another MSM admission that the “vaccines” are in fact slow kill bioweapon injections. Today’s grim truthiness is brought to us by The Telegraph, in an article entitled, Critics claim Covid jabs are causing heart problems – do they have...

Another day, another MSM admission that the “vaccines” are in fact slow kill bioweapon injections.

Today’s grim truthiness is brought to us by The Telegraph, in an article entitled, Critics claim Covid jabs are causing heart problems – do they have any proof?

While there have always been anti-vaxxers, this new concern is drawing in people from outside usual conspiracy theory circles.

In other words, “anti-vaxxers” have always been conspiracy factualists that turned out to be right about everything; to wit:

MUST SEE: Let’s Compare the Vaccinated to the Unvaccinated

MUST SEE: Let’s Compare the Vaccinated to the Unvaccinated

Dr. Paul Thomas Blows Up the Conventional Vaccine Narrative. The charts are utterly devastating; to wit: As you watch the brief VIDEO ponder the below: Question: are any vaccines necessary? Answer: NO. Question: are vaccines safe? Answer: NO....

ALL Vaccines Are Unsafe & Ineffective: Things You Should Know about Traditional Vaccines

ALL Vaccines Are Unsafe & Ineffective: Things You Should Know about...

There is not a single RCT peer reviewed with true placebo control group vaccine study in existence. Not a single vaccine is necessary and safe.This substack is a daily battle against evil. Please consider becoming a paid subscriber: it’s 8 cents a...

On Monday evening, the American football player Damar Hamlin collapsed on the field after colliding with an opponent. He suffered a cardiac arrest and needed to be twice resuscitated. Within hours, social media was rife with speculation that the 24-year-old Buffalo Bills star was the victim of a Covid jab, his heart – it was speculated – having been dangerously weakened by the vaccination.

The British cardiologist Aseem Malhotra tweeted about the incident. “One obvious question many are asking is whether he had the mRNA jab,” he wrote, going on to point out that myocarditis (heart inflammation) – a side-effect linked to the vaccine – increases “sudden cardiac death risk in contact sports”, where “blunt impact to the chest” is common.

The public is finally waking up to the fact that the “vaccination” program as a whole is a long-running eugenics program. And doctors like Aseem Malhotra that used to eagerly shill for the DEATHVAX™ are experiencing adverse reactions and tragedy such that they have now vehemently come out against these BigPharma poison injections.

It only took an elite NFL player to collapse on the field from a routine play, and for both teams to refuse to complete the game for the first time in the league’s history for the ever growing “anti-vaxxer” movement to coalesce around this tragedy. Sometimes it takes a bread and circuses spectacle to inspire people to speak out.

And yet for the last two years ever since the COVID-19 “vaccine” rollout there has been painfully obvious and irrefutable proof that athletes were collapsing and dying at unprecedented rates; to wit:

And it will only get worse...

“Traditional vaccines are one of the safest medicines we’ve got,” he told The Telegraph. “They are the Holy Grail of medicine, and it was not even a possibility for me that they could do any harm.”

But the death of his father changed his mind. Dr Kailash Chand, former deputy chair of the British Medical Association (BMA), was a seemingly fit 73-year-old, when he suffered a fatal cardiac arrest last July.

A post-mortem revealed severe blockages in two of three major arteries. Even though Dr Chand had his booster vaccine six months earlier, his son believes it was a factor.

“I knew my dad’s medical history inside out,” said Dr Malhotra. “He was one of the fittest guys I knew, who kept up his 10,000 steps a day even in lockdown. Just a few weeks before we were walking up mountains together.

“We did some heart scans a few years earlier and all was clear, so when the post-mortem showed severe blockages I couldn’t understand it, even though it was my [area of] expertise.

“At the time people were trolling me, saying it was the vaccine, and I got really angry and blocked them, because that was not my mindset. But then I started to notice increased incidences in cardiac deaths and I started to wonder.”

Here’s hoping that just like Dr Malhotra made the connections regarding the mRNA poison that murdered his father, he will one day also realize that traditional vaccines are anything but the Holy Grail of medicine; in fact, they are the Holy Grail of slow kill eugenics. Perhaps any one of the plethora of traditional vaccine side effects needs to cause damage to another relative or friend of Dr Malhotra’s for him to once again open his mind and realize the errors of his medical training brainwashing.

“At the time people were trolling me, saying it was the vaccine, and I got really angry and blocked them, because that was not my mindset. But then I started to notice increased incidences in cardiac deaths and I started to wonder.”

What he really needs to notice are the increased incidences of autism, cancer, ADHD, and so on and so forth since the childhood vaccine schedule exploded in the 1980s.

And this is not including the recently added COVID slow kill bioweapon DEATHVAX™: The war on children indeed, and society as a whole. Do NOT comply.2nd Smartest Guy in the World is a reader-supported publication. Consider becoming a paid subscriber.

Dr Malhotra is right to say that heart deaths have increased alarmingly in the last few years. According to the British Heart Foundation there have been around 30,000 more deaths than expected involving heart disease since the pandemic began – more than 230 additional deaths over expected rates each week.

In some weeks last year, there were more than 1,000 excess deaths with cardiovascular disease mentioned on the death certificate.

But if we are looking for a reason for the rise, there are plenty to choose from without needing to point a finger at Covid vaccines.

And the whitewashing sans a single research citation:

A Covid infection itself is known to raise the risk of a stroke and heart attack, so the virus was likely to be a significant factor in the increase, at least in the first year of the pandemic.

Also playing a role? More like driving the heart damage and deaths.

While Dr Malhotra acknowledges that other causes are a factor, he remains convinced that vaccines are also playing a role.

He cites Pfizer’s own trial data, which showed there were four cardiac arrests in those who took the vaccine compared with just one in the placebo group.

And he points to a controversial study published in the journal Circulation by the US cardiologist Dr Stephen Gundry, who claimed that inflammatory markers in his patients soared after they received vaccines – taking their five-year heart attack risk from 11 per cent to 25 percent.

“That is a massive jump,” he said. “If I decided to smoke 40 cigarettes a day, ate junk food, drank and didn’t exercise I couldn’t get anywhere near that.”

The Gundry study was heavily criticised, and has been significantly amended to make clear the biomarker increases were observational, there was no control group, no unvaccinated patients were included, and no statistical comparison was conducted.

The British Heart Foundation told The Telegraph: “The scientific consensus is that the benefits of Covid vaccination, including a reduced risk of severe illness or death, far outweigh the very small risk of rare side effects like myocarditis or pericarditis for the vast majority of people, especially as people get older.

“This is why it’s particularly important if you’re over 50 that you have a booster when offered it to give you even greater protection.”

Historically, if any medicine resulted in ten deaths it would carry a black box warning, and up to fifty deaths would mean that said medicine would be pulled from the global market forever. Even the mendacious British Heart Foundation could not deny that more than fifty “vaccine” induced deaths have already occurred just in the UK.

But the benefits appear to outweigh the risks.

A major review by the US Centers for Disease Control and Prevention (CDC) found that although there would be up to 47 more cases of myocarditis in 12 to 29-year-old males per million vaccines, the jabs would prevent 11,000 Covid infections, 560 hospitalisations, 138 ICU admissions and six deaths.

Note the keyword “review” which is far from an actual study; in fact, this Center for Disease Crimes (CDC) “review” did not cite a single legitimate study.

The rest of this coverup article goes through more asinine excuses and State propaganda to justify the soaring mortality and diseases since the “vaccine” rollouts. It is yet another sickening exercise in baffling with bullshit those useful idiots that have already genetically modified themselves and may continue to do so with never-ending boosters.

Every single individual that took these injections has heart damage and VAIDS. The only question that remains now is how extensive the damage is, and what kind of treatments are being used to reverse some of that damage.