The Missing Babies of Europe

The Missing Babies of Europe

Nine months after mass vaccination, 110,000 fewer babies are born. In the U.S., birth data is scarce, and few mention the F word: Fertility

This article is part of a publishing collaboration between RESCUE and TrialSite News. 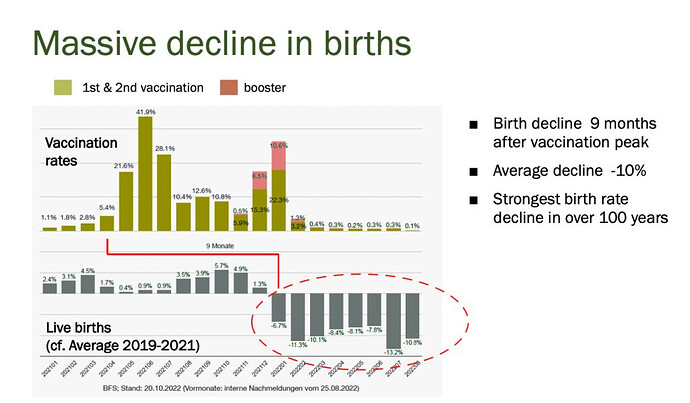 In Switzerland, births declined sharply after covid vaccination campaigns. Monthly vaccination rates are shown at top, births at bottom. The red line at center is labeled in German, “9 Monate,” or 9 months, showing the interval between the trends. A nearly identical pattern in other countries is depicted below. (Source: Lawsuit against Swissmedic, November 14, 2022.) Click to enlarge

Evidence is growing in Europe that many fewer babies are being born in the aftermath of—and circumstantially related to—the covid-19 vaccination rollouts. This widespread phenomenon is alarming doctors, data analysts, and others who say a monumental shift is being ignored.

“Since January 2022, the number of live births has fallen like never before in Switzerland and the canton of Bern,” reads an urgent report by canton legislators. A separate Swiss research study, meantime, reported a 10 percent decline in births in the first half of 2022 compared to the prior three-year average. Using statistical modelling, it found “a striking temporal correlation between the peak of first vaccination and the decline in births in Switzerland.”

While the famously neutral Alpine nation has emerged as ground zero in a battle against vaccine-related infertility, several other reports suggest this is an across-the-continent problem that should be worldwide news. Because these key emerging reports are not in English, they are virtually unknown in the United States.

In perhaps the largest study on this worrisome trend, three analysts based in Germany studied data from nineteen countries in Europe. They found a 7 percent decline in births, translating into 110,059 fewer births in the first half of 2022 than the average of similar periods from 2019 to 2021. (Data was not analyzed for the United Kingdom and Italy.)

This emerging wave of European research—most in the last four months—is being done outside of normal channels and by independent researchers: a doctor, university professor, and legislator here; a high school educator, pharmacist, and statistician there. As such, a network of grassroots but statistically savvy people is stepping into a void left by government and regulatory agencies who reject the possibility of vaccine harm in all but a few discreet cases.

Written in German and translated also into French, the European study reported drops in births of more than 10 percent in five countries. In ten others, births declined from 4 percent to 9.4 percent. The highest decline, 18.8 percent, was in Romania.

“This very alarming signal cannot be explained by Covid-19 infections,” concluded the August 25, 2022 report, which, as in the Swiss reports, saw parallels between huge vaccination campaigns and, nine months later, the start of what one report called a “baby gap.”

“The correlation with the vaccination campaign and the situation at the time suggests that vaccination had physiological influences on the fertility of women or men,” the report on Europe stated, pointing to evidence of menstrual irregularities and declining sperm counts after vaccination.

Swissmedic, which is the Swiss version of the U.S. Food and Drug Administration, has rejected any “causal connection” between covid vaccines and fewer babies. 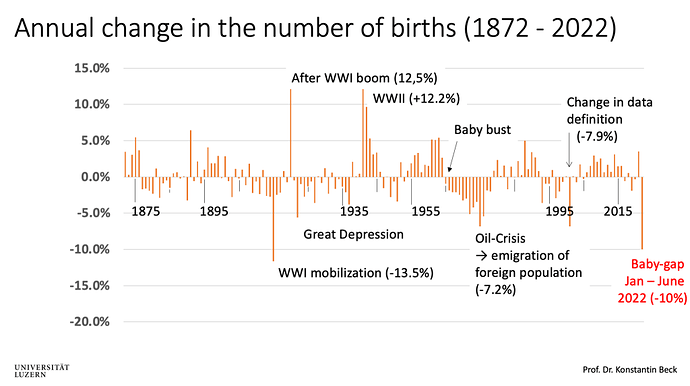