The EU's quiet coup in Gibraltar by Mark Mardell 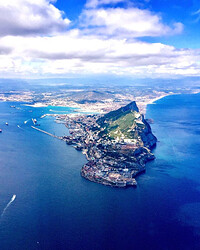 There are few greater symbols of Britain's standing in the world than Gibraltar. But, as MARK MARDELL explains, as the UK moves away from the EU the Rock is gravitating dramatically into its sphere.

A British warship, the HMS Trent, has arrived at her new permanent base, Gibraltar, Britain’s last remaining European overseas territory.

For the hyper patriotic tabloids, which regularly work themselves into a frenzy by imagining conflict with Spain over the status of the Rock, it is not only exciting but a delight and a reassurance.

It wasn’t long ago that former Conservative leader Michael Howard drew a direct parallel with the Falkland’s War and suggested a taskforce could be sent to sail around to show the Spanish who’s boss.

In fact, rather than fantasy, HMS Trent’s mission is to train her 30mm gun on pirates off the North African coast, not on pretend Spanish invaders. The Spanish government have been specifically reassured the vessel won’t actually patrol these particular coastal waters.

In-depth article at the link on The New European.

While the article is Mardell's analysis with some very good points, "The Best Laid Plans of Mice and Men” often go astray.

It's best to depend and believe in God's Plan:

Another article by Mark Mardell (similar article as above)

The territory at the tip of Spain will remain British on paper, but in practice Brexit has brought it closer to the EU than ever…