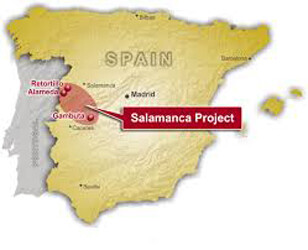 Berkeley Energia (ASX, LON: BKY), the Australian company that has been trying for years to build Europe’s only open-cast uranium mine, was notified that its request to build a uranium concentrate plant at Retortillo had been denied by Spain’s Ministry for Ecological Transition.

The news came as no surprise, as back in July the country’s nuclear regulator CSN had already issued a binding ruling opposing the project on safety concerns.

According to the regulator, there was a lack of reliability and a high level of uncertainty over how radioactive waste would be stored at the facility.

The recent news of the Ministry’s denial, thus, was welcomed by activists opposing the project, particularly the Stop Uranio environmental protection group, which has been campaigning against the mine for a decade now.

Worries surrounding the project include its impact on nearby farm animals, mainly cattle.

Chernobyl 1986 and Fukushima 2011 are two examples of why mankind has no business messing with nuclear power. And more reasons not to let the globalist call it "green".

Chernobyl 1986 was the Third Trumpet in Biblical Prophecy -

2 Edras 5:4 But if The Most High grant thee to live, thou shalt see after (1986 ) the Third Trumpet (Revelation/Apocalypse 8:10-11 - CHERNOBYL means Wormwood in Ukrainian ) that the Sun (of Righteousness - see [Malachi 4:2](shall suddenly shine (enlighten people) again in the "night " (darkness - the "Dark Times" - evil.) – Signs of the End Times

The 3rd. angel (Rev. 8 v 10) happened in 1986 "and the name of the star is Wormwood ." Chernobyl is in the Ukraine and in Ukrainian Chernobyl means Wormwood. The Invasion of Kuwait in Prophecy was the Fifth Trumpet.