2022 will go down in history as the deadliest year in the last five years in our country, with a 17% increase in the number of deaths.

Excess mortality in Europe has still not returned to the usual pre-pandemic values, and Spain is among the countries at the top of this list. In fact, while the average number of European deaths is 6% higher when compared with data from 2016-2019, our country is experiencing a rise of almost 17%, according to statistics published this week by Eurostat, the statistical office of the European Union (EU). Only Portugal is ahead of us, with an increase of 24%, followed by Estonia, with an increase of 16%.

Last July was up to ten times more deadly than in 2019, with 9,687 more deaths than expected. A figure five times higher than the average for July (1,844) since the Carlos III Institute of Health (ISCIII) collects statistics in MoMo (the system for monitoring daily mortality from all causes in Spain).

Up to the end of July, excess mortality in Spain totalled 28,300 people, which is already 13.4% more than the total number of excess deaths for the whole of 2021 (24,500). And there are still five months to go before the end of the year.

Of course NO mention of the damage caused by the jabs, instead they blame the heat which fits the climate change narrative. 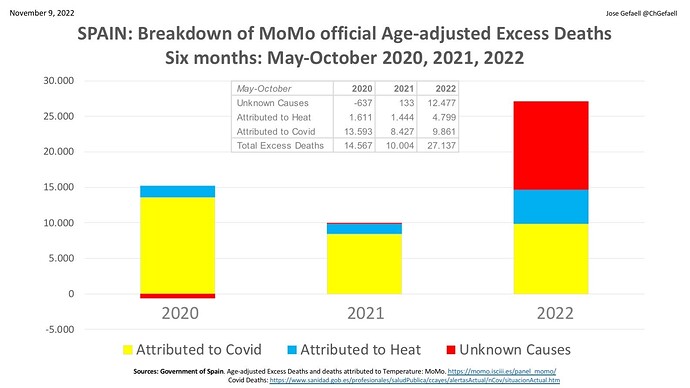