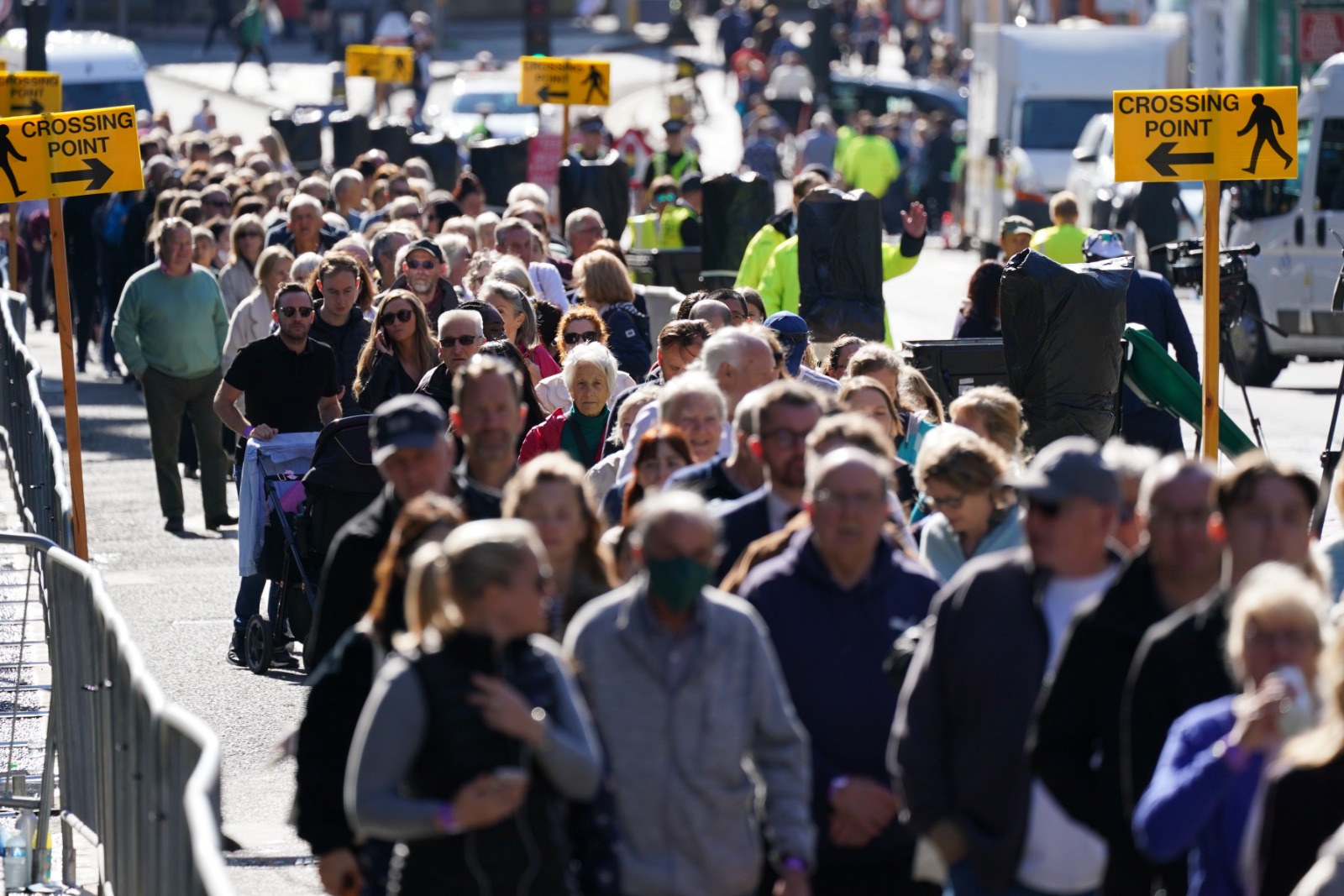 'Six officers of the Royal Gibraltar Police have travelled to London to help their colleagues in the Metropolitan Police provide security for a "hugely complex" policing operation in the days leading to the state funeral of Queen Elizabeth II on September 19.

Huge crowds are expected to pay their respects as the Queen lies in state in Westminster Hall. They will be able to file solemnly past 24 hours a day from 5pm on Wednesday September 14 until 6.30am on the day of the funeral, Monday September 19.

But the UK Government has stressed that mourners will likely have to wait many hours and the queue will continuously move, with little chance to rest or sit down. The very long line of those waiting is expected to stretch through central London, placing immense demands on the Metropolitan Police.

A sense of what can expected in London was seen on Tuesday in Scotland as thousands of members of the public queued to pay their respects to the Queen as she lay at rest at St Giles' Cathedral, Edinburgh, many of them having waited overnight.

As of 11am on Tuesday, there were eight people in the queue by Lambeth Palace in London waiting to pay their respects to the monarch, more than a day before the Queen’s lying in state begins at Westminster Hall.

Later in the day mourners had already begun to line the banks of the River Thames opposite the Palace of Westminster, with portaloos were provided for those queuing overnight.

The six RGP officers were deployed to London following a request for mutual assistance from the UK’s National Police Co-ordination Centre, which is organising support fro other forces to help the Metropolitan Police deal with unprecedented demands on manpower.

The officers will assist in policing the queue of mourners and will also don ceremonial dress for the state funeral, standing alongside colleagues from the UK and other Overseas Territories lining the route of the funeral cortege.

On Monday evening, the six RGP officers were sworn in to give them all the powers of Metropolitan Police Service officers.

While serving in London, however, they will represent Gibraltar by continuing to wear their RGP uniforms.

The Commissioner of Police, Richard Ullger, acknowledged the sad circumstances of the deployment but said too that it was a proud moment for the RGP to be part of these unique, historic events.

“The officers who have already been deployed have all expressed their immense pride to serve the Queen one last time and I am grateful for the professionalism and dedication they have shown,” he said, adding that two of the six officers flew to London just hours after participating in the Proclamation Parade in Gibraltar on Sunday.

At the weekend, a senior Metropolitan Police officer said policing in the run-up to the Queen’s funeral will be a “hugely complex operation”.

Deputy Assistant Commissioner Stuart Cundy on Sunday said hundreds of extra officers had already been called in as thousands descended on the capital following the monarch’s death.

Officers are likely to be concerned with managing crowds, with a huge number of mourners expected to queue for several hours, including overnight, to pay their respects to the Queen as she lies in state, expected to be from Wednesday.

Leaders from around the globe will also travel to the UK for the state funeral on Monday, meaning security will be of increased concern.

Mr Cundy said: “Our role is to ensure this is going to be a safe and a secure set of events.”

“Our policing operation is hugely complex, with a huge amount of detail within it, as you can well imagine.”

“So we’re always mindful of all manner of different potential things that might occur. We know that not just the eyes of the United Kingdom but the world will be on London at this point in time.”

Members of the public are being encouraged to engage with police and speak to them if they have any concerns.

Mr Cundy said: “This is a point in time for everybody to remember Her late Majesty the Queen, to pay respects, and I think also to celebrate the long life of public service which she demonstrated.”

“As a police officer, we swear a solemn oath and it’s a real privilege to be serving His Majesty the King. The Met is well prepared and people will already have seen significant policing presence of my colleagues here in London, and that will continue to build over the coming days.”

“We’re working closely with other police forces here in London, and many other partners and other agencies that are involved in the many events that will take place from now leading up to the state funeral on Monday.”

World leaders are expected to be in London for the state funeral, but Mr Cundy said the force was prepared for their visit.

He said: “As part of our policing operation, and we have much experience with this here in the Met Police, is to protect key individuals that may be coming at different points in time, but particularly to the state funeral on Monday, and then undoubtedly that will be many people, many significant individuals from across the world, but we have excellent protection officers that will be working with other colleagues to ensure that there’s a safe and secure environment for people to come and pay their respects and to remember that life and public service of Her late Majesty the Queen.'