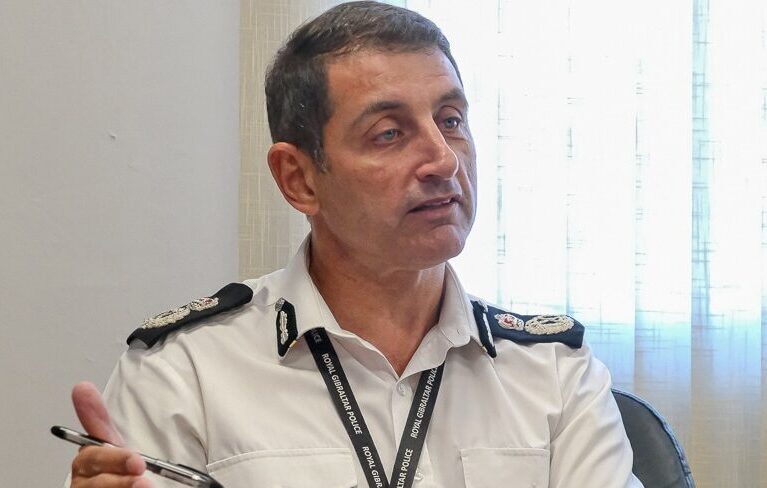 Richard Ullger has been re-appointed as the Royal Gibraltar Police’s Commissioner, with his term extended for over two years. The Governor, Vice Admiral Sir David Steel, on the recommendation of the Gibraltar Police Authority and in consultation...

Richard Ullger has been re-appointed as the Royal Gibraltar Police’s Commissioner, with his term extended for over two years.

The Governor, Vice Admiral Sir David Steel, on the recommendation of the Gibraltar Police Authority and in consultation with the Chief Minister, re-appointed Commissioner Ullger.

The Governor and Commissioner Ullger, who met on Friday, and agreed that he will continue to serve, subject to the relevant terms and conditions, until the end of April 2025.

Sir David congratulated Commissioner Ullger, adding the RGP has continued to demonstrate immense professionalism in meeting the requirements of the community it serves.
In congratulating the Commissioner on this extension of his appointment the Governor said

The Governor is pleased with the way in which Mr Ullger has led the RGP in implementing a comprehensive reform programme, which has recently received the full support and approval of His Majesty’s Inspectorate of Constabulary, Fire and Rescue Services.

“My admiration for the men and women of the Royal Gibraltar Police remains immense,” Sir Davis said.

“The policing challenge gets greater day by day and yet our policemen and women in uniform, and those who support them, are better trained than ever, and eager to serve and protect the community that places its trust in their professionalism.”

“Our community rightly expects its police force to be of the highest possible quality and the Chief Minister and I will continue to do all we can to ensure that the Commissioner and the RGP are properly supported in all that they do for all of us who have the pleasure in calling Gibraltar our home.”

Commissioner Ullger said he is extremely delighted with the announcement and is grateful to the the Governor, Chief Minister and Gibraltar Police Authority for their confidence in him.

“I am delighted to be continuing as the Commissioner of Police and look forward to building on the excellent work already achieved by the force,” he said.

“I firmly believe that continuity of leadership, at this crucial time, is essential to maintain, and in some areas, accelerate our performance improvements.”

“Gibraltar deserves the very best policing services we can provide and I am grateful for the opportunity to continue leading the men and women of this very proud force.”