Our Species Is Being Genetically Modified. Are We Witnessing Humanity’s March Toward Extinction? Viruses Are Our Friends, Not Our Foes 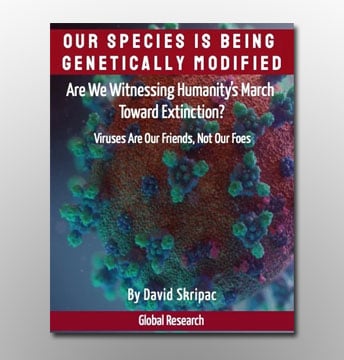 Chapter 3 goes into the research of Christine Massey, and numerous Freedom of Information Act (FOIA) requests. The results of her requests are alarming, yet not surprising. All of the responses confirm that there is, as she puts it, no record of “isolation/purification of SARS-CoV-2 having been performed by anyone, ever, anywhere on the planet.”

Dr Bush demonstrates people were clearly dying from environmental toxicity, not from a viral infection.

That is precisely why there is no scientific, peer-reviewed study providing conclusive evidence that a virus called SARS-CoV-2 causes a fatal disease named COVID-19 .

A brief summary of the book below:

David Skripac has a Bachelor of Technology degree in aerospace engineering. During his two tours of duty as a captain in the Canadian Air Force, he flew extensively in the former Yugoslavia, Somalia, Rwanda, Ethiopia, and Djibouti.

Using an inquisitive mind, a keen eye for detail, and problem-solving skills honed during his university years and throughout his career, David devoted close to 200 hours researching the latest scientific findings in the fields of virology and microbiology to bring this book to fruition.

Since the spring of 2020, he has also written several essays on the subject of COVID-19 for Global Research.

The Microbiome and The Virome

Our War against Nature

When the alleged “pandemic” was declared in March of 2020, I, like millions of other people around the world, was paying close attention to politicians and public health officials as well as to bureaucrats from the Rockefeller Foundation-created World Health World Health Organization (WHO), all of whom announced, in almost perfect synchronicity, “This is the new normal until a vaccine can be developed.”

How odd, I thought. Why is it that the immediate default position is a vaccine? And why is it that a single coronavirus is being blamed for causing people to fall ill in every corner of the earth? Could something else—perhaps one or more toxins in the environment—be the real culprit?

For the first time since human civilization began, our species is being genetically modified.

Vaccine manufacturers have now made it possible for the human genome to be permanently altered—and humanity’s relationship with nature forever changed—by means of an experimental pharmaceutical injection that is being falsely referred to as a “vaccine.”

In light of this defining event, I believe we must take a sober look at the motives and acts that are revamping humanity as we know it. Simultaneously, we must examine our increasingly destructive treatment of the natural world.

In order to investigate the many variables that are hastening the demise of humanity and sabotaging our unique role as stewards of the earth and its billions of plant and animal species, I have divided this short book into four main chapters.

The Microbiome and The Virome

In this chapter, we will discover that, contrary to what Western allopathic medicine has been teaching us for over a century, viruses are not here to attack our cells or harm us in any way. In fact, rather than being our mortal enemies, viruses are actually our friends.

Our War against Nature

In this chapter we will explore how our own reckless behaviour is destroying the environment, thereby moving us toward the sixth mass extinction. By that I mean, I will be covering the real environmental catastrophe, not the billionaire-funded “global warming/climate change” hoax initiated by the Club of Rome and further promulgated by the World Economic Forum (WEF).

We will now examine how this real environmental devastation has contributed to the “pandemic” that was rolled out in 2020—a “pandemic” that led to the mass experimental injection of unknown substances into human “subjects” in 2021 and that has no foreseeable end. (Throughout this book, I have been putting quote quote marks around “pandemic” because of its fraudulent character. Indeed, it is more accurately and aptly described as a plandemic, a scamdemic, a pseudo pandemic or any other term indicating fakery.)

Instead of coming to terms with how we are destroying our habitat, instead of learning the lessons nature has been trying to teach us over the past twenty months, most of us have ignored the wreckage and have refused to be taught. If anything, humanity has only intensified its war against nature during the past year’s pseudo pandemic.

As I observed at the beginning of this book, we are living in unprecedented times, in which humans can be genetically altered beyond recognition and the natural world is being ravaged almost beyond repair.

Yet, though these threats are lethal, there are also signs of hope. It is not too late to envision another possible path—one that does not point to our doom but, rather, invites us to accept that humanity has been made, from the beginning, to be an intrinsic part of nature. If we learn from the errors of our ways, we have a window of opportunity to step back from the abyss of transhumanism and species extinction. We can instead embrace our beautiful planet with all of its glorious biodiversity—an earth teeming with abundant life that offers a glimpse of the perfect universe made by God, Spirit, and bestowed on divinity’s spiritual creation.