Our God and Souldiers we alike adore, Ev’n at the Brink of danger; not before 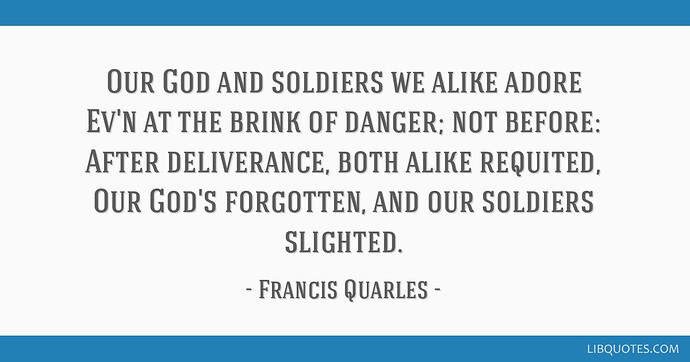 Our God and Souldiers we alike adore,
Ev’n at the Brink of danger; not before:
After deliverance, both alike required;
Our God’s forgotten, and our Souldiers slighted.

In a 27 November 1962 speech by President Kennedy, quoted it.

President John F. Kennedy quoted this in remarks to members of the First Armored Division, Fort Stewart, Georgia, November 26, 1962: “Many years ago, according to the story, there was found in a sentry box in Gibraltar a poem which said:

God and the soldier, all men adore
In time of danger and not before
When the danger is passed and all things righted,
God is forgotten and the soldier slighted.

This country does not forget God or the soldier. Upon both we now depend. Thank you.”

— Public Papers of the Presidents of the United States: John F. Kennedy, 1962, p. 840. The First Armored Division had been deployed during the Cuban crisis.

It was also used by Henry Laurens in a letter to George Washington.

Doesn't look like The West is going to remember God, until the danger hits.