On Your Bike! Feeling The Angst of The Anglicans 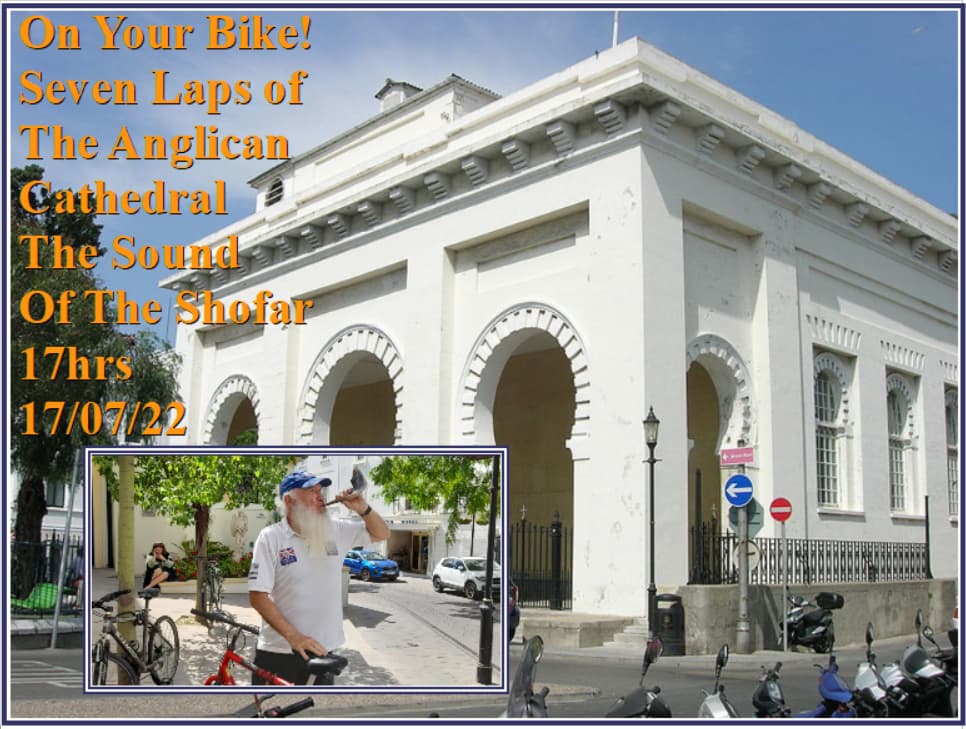 In a service held at the Anglican Cathedral on 17th July 2022, the Dean, The Organist, and one of the stewards acted swiftly and incisively to evict one of The Lord's Disciples from inside the premises at the end of the Sunday 11 am service. The eviction happened shortly after The Port Chaplain Chris Rushton had said the following from the pulpit: "LET US GO IN PEACE TO LOVE AND SERVE THE LORD", and The Choir had melodically responded to The Port Chaplain "IN THE NAME OF CHRIST. AMEN".

However, much to the surprise of The Ministry Team, instead of hearing JS Bach, the congregation were treated to a special recorded rendition from Psalm 2 - The Triumph of The King, from none other than The Gibraltar Messenger, the Christ in His Second Coming.

PSALM 2 FROM THE KING OF KINGS' BIBLE

At this point, the resident organist Michael Stevenson, despite Tony Farrell's initial protestations, switched off The Lord's Disciple's sound-system, so as to prevent the cathedral congregation from hearing The Lord's voice in His Reading of Psalm 2. The audio was taken from the 2014 documentary The Seven Hills Ripple Effect. The Lord had given disciple Tony Farrell permission to play His Psalm 2 recording on the sound system, at the end of the Cathedral service. 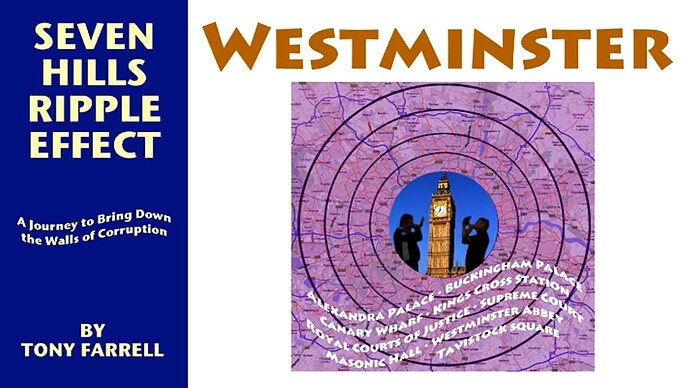 The full all important reading from The Lord, can be listened to [here](Seven Hills Ripple Effect - YouTube), 55 minutes into the video.

Sadly, thanks to the over-hasty actions of The Dean, Ian Tarrant and The Organist, Michael Stevenson, the cathedral congregation and the young touring party from Cambridge were denied hearing the full reading, which, had the Ministry Team not impetuously intervened, would have included the following verses for completeness of the all important message.

2:7 I will declare the decree: the "I AM" hath said unto me, Thou [art] My Son; this day have I created for thee.
2:8 Ask of Me, and I shall give [thee] the unenlightened [for] thine inheritance, and the uttermost parts of the earth [for] thy possession.
2:9 Thou shalt break them with a rod of iron; thou shalt dash them in pieces like a potter's vessel (Rev. 12:5).
2:10 Be wise now therefore, O ye kings: be instructed, ye judges of the earth.
2:11 Serve the "I AM" with fear, and rejoice with trembling.
2:12 Kiss My Son , lest he be angry, and ye perish [from] The Way , when his wrath is kindled just a little (Luke 19:27). Blessed [are] all they that put their trust in him . 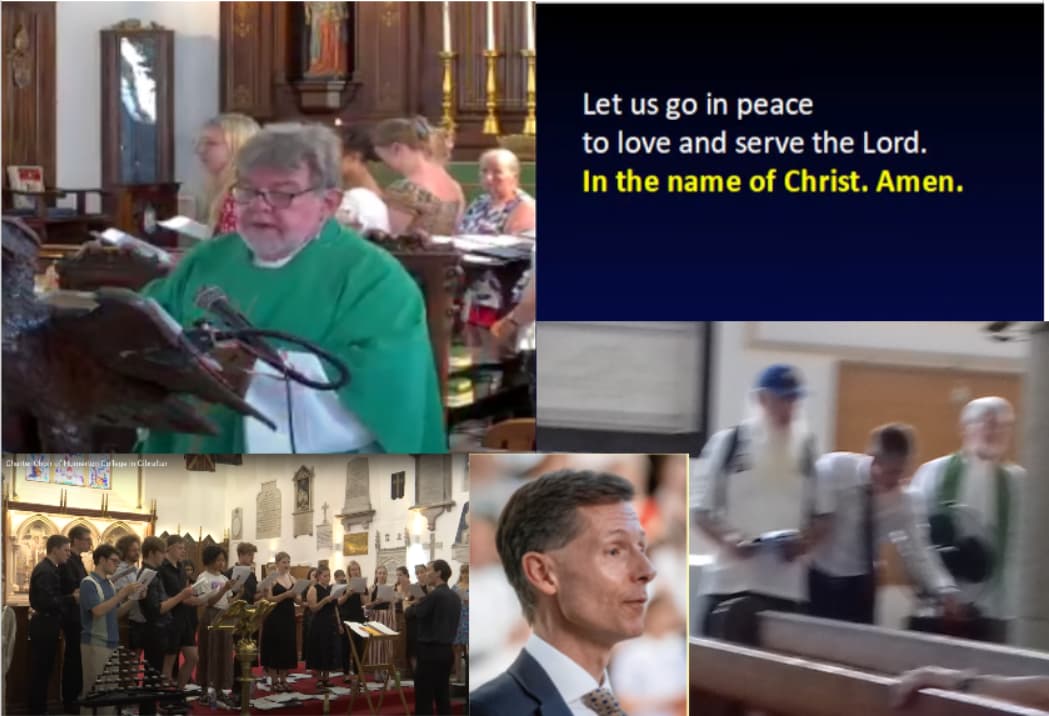 Watching on as witnesses to the proceedings, were many of the usual congregational suspects, including The Governor David Steel, The Professor of Theology - Robin Gill, and two dozen or more members of The Charter Choir from Homerton premier music ensemble - a touring party made up of undergraduates from The University of Cambridge.

In this manner, the impetuous unpeaceful action, as taken by Dean Ian Tarrant and The Resident Organist Michael Stevenson, fulfilled the prophecy announced by Christ to His disciples two thousand years ago. 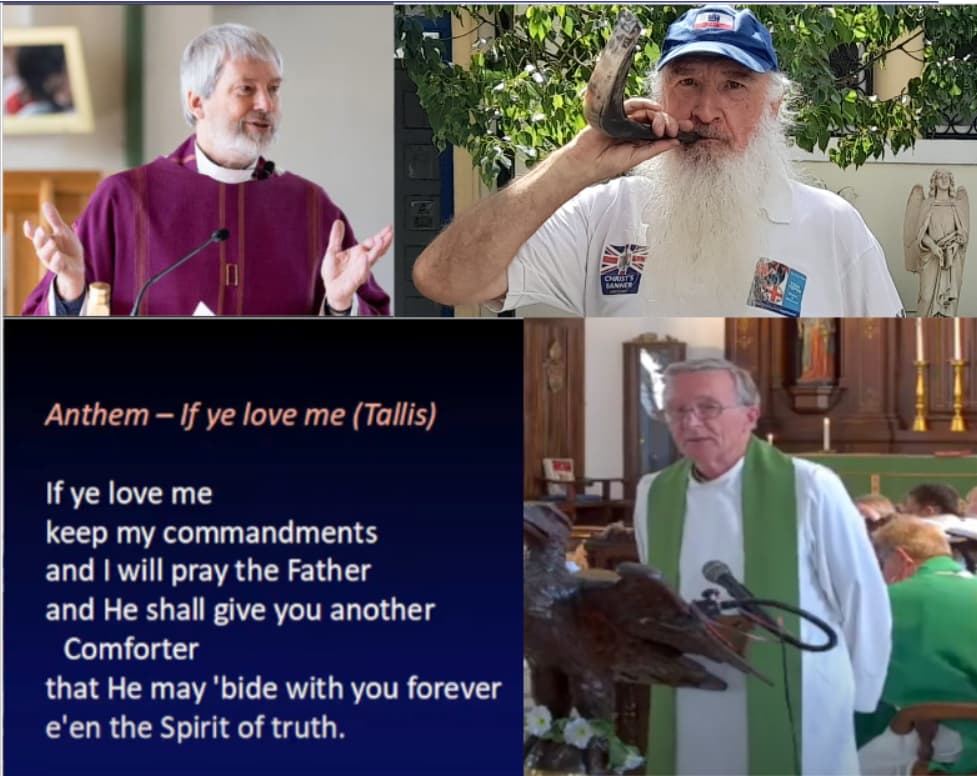 Before the congregation, I was asked amidst the angst of the Satanic Priesthood to leave the premises, and the steward escorted me out of the building, while I implored him to study Psalm 2, and reflect upon what they had just done. As I left the building, as per the Dean's instruction, I passed Professor Robin Gill, who just gave me a rueful look.

Peter, a co-worker and disciple of The Lord, had been observing proceedings at the opposite side of the Cathedral. He was situated near to The Governor of Gibraltar at the time. Peter left the premises voluntarily in disgust, and when we joined up outside, we wondered what The Governor of Gibraltar David Steel would have made of it all, but we did not stay around to find out. Perhaps, if David is a man of his word, and keeps his promise, and is kind enough to grant us our meeting, as per our original request on 1st April 2021, David Steel might let us know some positive news, hopefully with the words of Psalm 2 foremost in his mind. 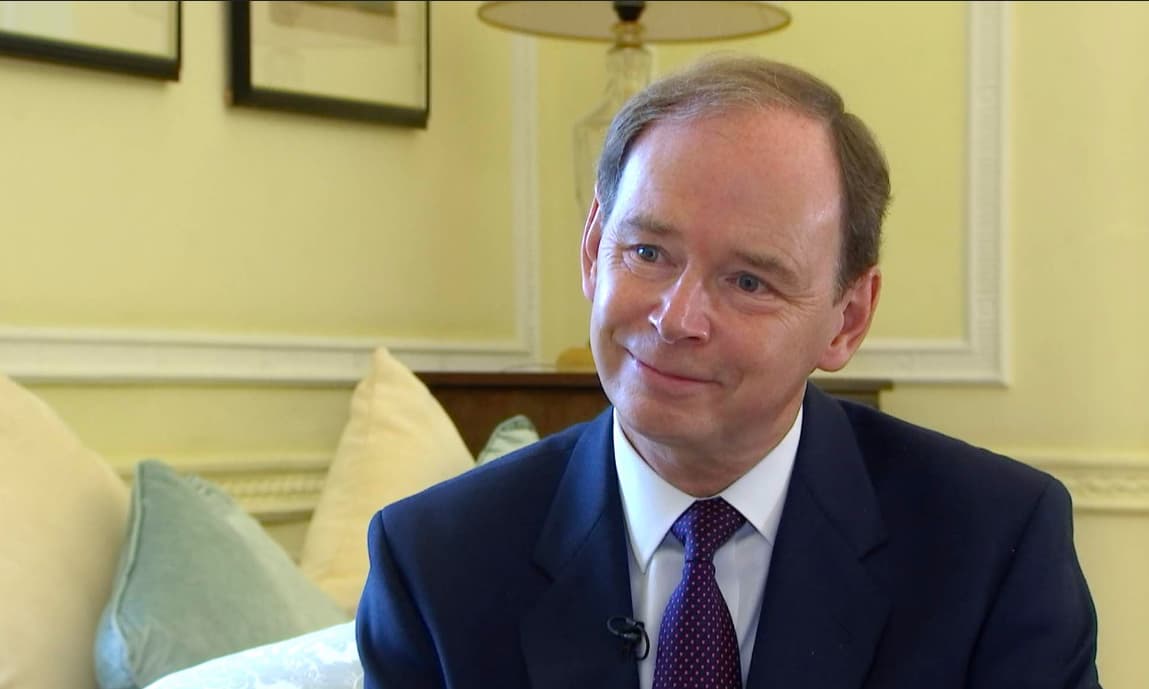 I returned to the Anglican Cathedral, later in the afternoon, armed with a shofar, and my sound-system. While the evensong service carried on regardless inside, I felt called to encircle the Cathedral from the outside, by cycling around the square seven times on my bicycle while simultaneously playing the sound of the shofar. By the time the armed response police van arrived on the scene, the seven laps had already been completed, and there was nothing for the Royal Gibraltar Police to see or do.

After the evensong service had finished, Professor Robin Gill spoke to me while I was sat down outside peacefully on a nearby bench. Robin commented on the intervention earlier in the day, and informed me that it was a risky thing for me to do, given that there are laws in place in Gibraltar about disrupting a service in a place of worship. He should have said in an idolatrous place of false worship for accuracy, so I reminded Robin that what he was talking about was unGodly legislation, which is forbidden under The Law. Robin asked me did I know what happened to the last person who disrupted a Cathedral Service, and so, not being absolutely certain of the incident to which he was referring, I asked Robin to elaborate. He mentioned the Case of Dean Restorick who had in 2020 disrupted a Catholic Cathedral service. The case is a familiar one, the finer details are well-known to me, so I informed the professor that the comparison between the two events were entirely inappropriate, and that in any case, I had respectfully waited until the service had been completed, before interjecting with The Lord's rendition of PSALM 2.

In asking Robin if The Ministry Team were making a complaint to the police, Robin informed me that they were not going to make any complaint because it would not be the Christian-like thing to do on this occasion. Not once did Robin stop and ponder on the fact that yet again The Ministry Team of The Anglican Cathedral in Gibraltar had shunned Christ in abruptly blocking Christ's rendition of Psalm 2. 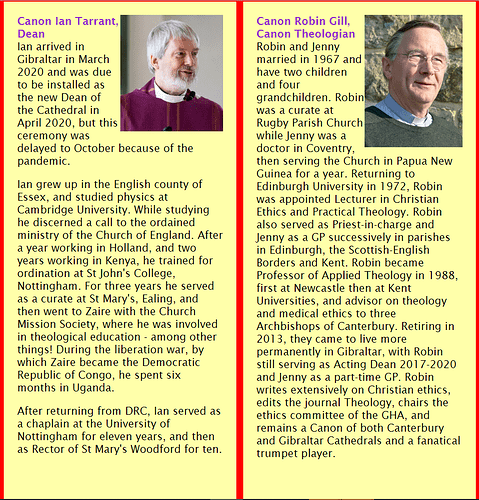 Given Robin Gill's Ministry Team's profile describes Robin as a fanatical trumpet player, I showed him my shofar, and informed the fanatical trumpeter, that I'd just done seven laps of the Cathedral with the ram's horn. Robin could not handle that fact, and fled away without so much as a by or leave. I had both Joshua, as in The Walls of Jericho, and the Seven Hills Ripple Effect in mind, and a journey to Bring Down the Walls of Corruption, when I said all that to the ethics professor and the chair of the ethics committee of the Gibraltar Health Authority.

6:5 And it shall come to pass, that when they make a long [blast] with the ram's horn, [and] when ye hear the sound of the trumpet, all the people shall shout with a great shout; and the wall of the city shall fall down flat, and the people shall ascend up every man straight before him.

Shortly after Robin departed down Main Street, I was approached by one of the young undergraduates on tour from Cambridge. His name was Adam. Adam wisely asked me about Psalm 2, and we chatted briefly about the sad thing that had happened in the Cathedral earlier in the day. I informed Adam that I would be writing an article about the proceedings, and I advised him to check-out The Lord's work (https://christs.net/). I told Adam that Gibraltar was just about the most important place on the planet, and that he should acquaint himself with The Gibraltar Messenger. I wished Adam from Cambridge, pictured wearing spectacles, in the frame below, a safe journey back to Cambridge. I wished to myself, that the Ministry Team of the Cathedral in Gibraltar, had exhibited half as much wisdom earlier in the day, as Adam had just done after the choir's final performance on their tour of The Rock. 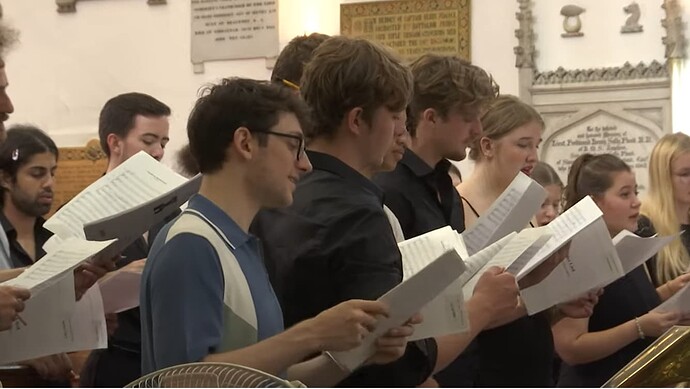 I love The Lords works

Like the shofar was blown in the Catholic cathedral in Sheffield. Did they say they were going to pray for you this time bro?

Thank-you for your own extremely useful input on Sunday morning, at the end of the 11am service. I hope this account below, somehow better aids your understanding, as to what precisely was unfolding before your very eyes, especially given your own re-action.

On a personal note, I feel it would be most appropriate for the residential organist Michael Stevenson to be sighted on this too, so that hopefully he may come to understand the incident from the other side's perspective. It was Michael who pulled the plug on the sound-system so to speak, and in so doing, it was Michael who cut off the audio of The Lord's rendition of Psalm 2 at verse 6, which just so happens to be about what will eventually happen in Gibraltar. That was my first ever encounter with Michael, and while Michael was very quick off the mark to shut things down abruptly, with respect, he might benefit from learning more about why it all happened, in the manner it did.

Please would you consider forwarding on the email to Michael, so that he too, might reflect on the serious matters at hand.

Afterwards, in the early evening sunshine, I spoke briefly to Robin outside, while sat on a bench resting after doing seven laps of the premises on my bicycle. In discussions, Robin informed me that The Ministry Team would not be making a complaint to the police, giving his reasons, which I noted with interest. This discussion with Robin is covered in the article above.

Also, one of the touring party of undergraduates, after the evensong service came up to me outside while I was sat on a bench, and he engaged in a friendly conversation mostly about Psalm 2.

Peace be upon you and within you.

P.S. I have copied in The Governor David Steel, as he would have witnessed the incident, and he has been in occasional communication with me in the past, over matters very much related to Psalm 2 and The Reader of The Psalm, as it was relayed to you and your congregation, before it sadly got curtailed.