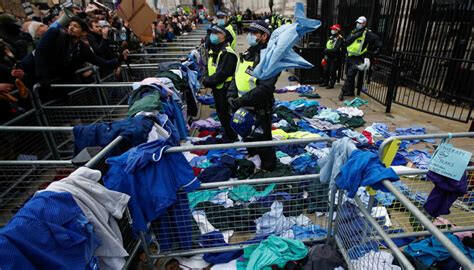 NHS Staff join in in mass Covid demonstrations | The Truthseeker

Videos have been appearing of mass demonstrations throughout the country, as well as abroad, against compusory vaccinations for Covid-19. In London such demonstrations have been taking place regularly since last summer. Yet Channel 4 News claimed that Saturday’s demonstration was of a tiny minority of NHS staff, which was then joined by others.

“What started as an anti-manditory vaccination for NHS workers has now grown into something much broader: anti-vax march in general” said the reporter. Well no. The demonstrations against the Covid restrictions began with tiny demonstrations organised by Piers Corbyn and colleagues, and they grew into something enormous.

“The WHO is running the NHS in the United Kingdom”

NHS Doctor: Matt Hancock is “Not Fit for Public Office and Needs to be Removed Before He Inflicts Further Harm on the People of this Country” MASSIVE Protests WORLDWIDE Against Vaccine Tyranny! - From Canada To...