Morocco, Key, Very Active Partner within the Union for the Mediterranean 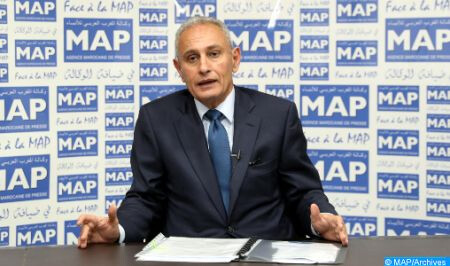 "Morocco is a key and very active partner not only within the Union for the Mediterranean but also in other important regional organizations such as the Forum of the two shores and Med 5+5," said Kamel who highlighted the proactive vision of the Kingdom in international relations.

"Morocco is an exemplary country in its way of being, proactive in its international relations. We can cite many examples: it is the first partner country of the southern shore of the Mediterranean in the European research program +Horizon 2020+, and also the first partner country at the African level of the European program Erasmus +," said the Secretary General of the UfM, recalling that since 2015, almost 10,000 Erasmus+ student and teacher mobilities have been organized between Morocco and the EU, in a wide range of disciplines and different study cycles.

"We must trust the United Nations to find a fair, lasting and mutually acceptable solution to the artificial territorial dispute between Morocco and Algeria since the Cold War," said El Malki, noting that this will make it possible to complete the construction of a united Maghreb, which will give rise to a stronger Mediterranean and more prosperity for the peoples of the region, which currently loses more than 2% in terms of GDP.

"The United Nations has long been one of the foremost world harbingers for the "New Spirituality" and the gathering "New World Order" based on ancient occult and freemasonic principles." Lucis Trust - The Spiritual Foundation of the United Nations

The U.N. is one of Lucifer's fronts for non-governmental organizations for global control.

"The roots of the Lucis Trust trace back to a woman who is credited for inspiring Hitler’s obsession with the occult, the 19th century author and occultist Helena Blavatsky, who discipled the founder of Lucis Trust, Alice Bailey. Blavatsky was a Russian immigrant and self-proclaimed levitating psychic who founded the occult and spiritualist movement called Theosophy, which became wildly popular, especially in Germany. She is “widely considered the ‘mother’ of New Age spirituality as well as a touchstone in the development of Nazi paganism and the chief popularizer of the swastika as a mystical symbol". BILL GATES, Madame Blavatsky, Alice Bailey, The Lucis Trust, and the OCCULT: CONNECTING THE DOTS – Absolute Truth from the Word of God

Walking down a street in Manhattan, I was invited (by a stranger) to a Theosophy lecture. Not knowing what it was at the time, I decided to go. The speakers spoke words, but my mind was not incorporating it .... it was as if he / she were speaking gibberish. I wandered out of the lecture hall and found myself in a room full of books. The books were about lucifer & ego as if they were good. The people there looked so nice and good, as did the young man that invited me. Tricky, indeed! Evil !!! Most everyone knows to avoid sharks; but, when they dress-up as goldfish .... watch-out! The U.N. is a shark with big, sharp teeth.

More from Camel, the general secretary of the Union for the Mediterranean (MfU).

Nasser Camel: Seven million unemployed women in the Mediterranean due to the pandemic

Nasser Camel: Seven million unemployed women in the Mediterranean due to the...

"The pandemic has led to the unemployment of more than seven million women in the Mediterranean countries," Nasser Kamel, the union's secretary general for the Mediterranean, said in an interview with the Athenian-Macedonian News Agency. While, along...

Tying in unemployment of women to climate change and green deals?

While, in parallel with unemployment, he characterized the climate crisis as the "main challenge of the region, as the Mediterranean is the most affected area more than any other on the planet by the phenomenon, as there is a 20% increase in temperature in combination with significant rise in sea level ".

He went on to say: "The new EU Green Deal clearly has a focus on targeted policies for inclusive sustainable development, the environment and climate change, digital transformation, which, as the pandemic has shown, is essential. in almost all forms of social and economic activity ".

Agents of the Global Plan for a One World Government.

What we NEED is true green, sustainable economics, i.e. a system that puts the principles of true love, true sharing and true conservation of our natural surroundings above mammon (money and materialism), the latter of which (the pursuit of mammon) is destroying everything – A Green Sabbath