More than 400 studies prove that lockdowns, mask mandates are harmful to human health 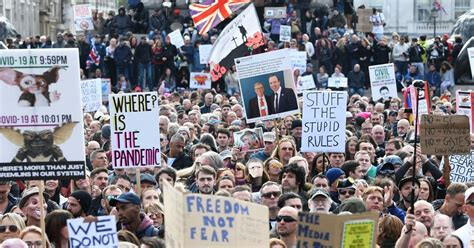 More than 400 studies, in fact, prove that not only mask mandates but also lockdowns and shelter-in-place policies are destroying people’s health, not promoting it.

The overwhelming body of evidence shows that masks and coverings for the face do absolutely nothing to promote health or protect against any alleged virus.

More than 400 studies, in fact, prove that not only mask mandates but also lockdowns and shelter-in-place policies are destroying people’s health, not promoting it.

“These restrictive policies were ineffective and devastating failures, causing immense harm especially to the poorer and vulnerable within societies,” reported LifeSiteNews.

Even so, nearly all major governments have imposed these restrictions on their people, which has only fueled the plandemic while simultaneously destroying the economy.

An analysis of all available science found that “in the framework of this analysis, there is no evidence that more restrictive nonpharmaceutical interventions (‘lockdowns’) contributed substantially to bending the curve of new cases in England, France, Germany, Iran, Italy, the Netherlands, Spain, or the United States in early 2020.”

None of this is news to people who have been paying attention to real science all this time as opposed to mainstream media “science.” Regardless, it needs to be shouted from the rooftops as loudly and as often as possible to wake up the sleeping masses.

The alleged benefits of lockdowns and mask mandates have been greatly exaggerated, it turns out. They have also been falsely touted as beneficial when the fact of the matter is that they are harming people, especially the most vulnerable.

“… the harms to our societies and children have been severe,” added LifeSiteNews.

“… the harms to children, the undiagnosed illness that will result in excess mortality in years to come, depression, anxiety, suicidal ideation in our young people, drug overdoses and suicides due to the lockdown policies, the crushing isolation due to the lockdowns, psychological harms, domestic and child abuse, sexual abuse of children, loss of jobs and businesses and the devastating impact, and the massive numbers of deaths resulting from the lockdowns that will impact heavily on women and minorities.”

Real science does not matter to policymakers, though, which are chomping at the bit to plunge everyone back into the same tyranny as last year with the arrival of the new “Omicron” (Moronic) variant.

Even though the Moronic variant originated in and is being spread by the “fully vaccinated,” government figureheads once again want everyone to get their “booster” shots and stay at home in a mask all day long in order to “cure” it.

“It was clear very early on that Task Forces and medical advisors and decision-makers were not reading the evidence, were not up to speed with the science or data, did not understand the evidence, did not ‘get’ the evidence, and were blinded to the science, often driven by their own prejudices, biases, arrogance, and ego,” LifeSiteNews went on to report.

“They remain ensconced in sheer academic sloppiness and laziness. It was clear that the response was not a public health one. It was a political one from day one and continues today.”

One recent study found that children born during the plandemic and all of its restrictions now have “significantly reduced verbal, motor, and overall cognitive performance compared to children born pre-pandemic.”

Males and children born to lower socioeconomic families are also said to be “most affected” by lockdowns, mask mandates and now the jab push.

All of this is just a large-scale experiment in modern-day fascism, and sadly too many people are still falling for the lie that this is about ridding the world of a “virus.”