Moderna COVID Vax Ingredients: DEADLY POISON “SM-102 – Not for Human or Veterinary Use” 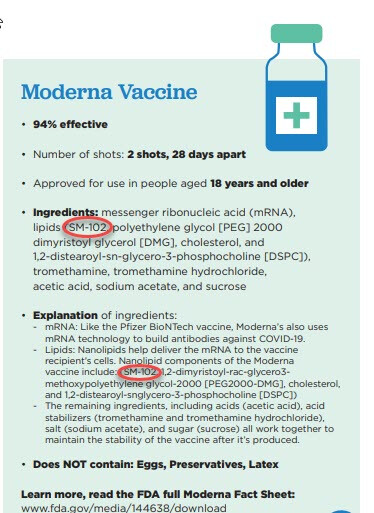 According to the manufacturer, Cayman Chemical Company in their filing with the Occupational Safety and Health Administration (OSHA), this chemical causes “Acute Toxicity “Fatal in contact with skin.”

In that same OSHA filing, the manufacturer declares SM-102 “Causes damage to the central nervous system, the kidneys, the liver and the respiratory system through prolonged or repeated exposure.”

Here is a section from the manufacturer’s OSHA filing:
This appears to be what they are injecting into YOUR arm when you take the Moderna COVID Vax. You are APPARENTLY being POISONED!

Perhaps this is why so many people are having “adverse reactions” to the so-called “vaccine?”

Yet Health departments all over this country are running TV and Radio ads telling the general public this vaccine is “safe.” That seems to be FALSE ADVERTISING.

Now that this information is out, YOU may wish to carefully re-think whether or not you want someone injecting this into YOU.

For those who made the decision to get this vaccine, you may want to get in touch with a good personal injury lawyer and present this information to that attorney. (While you’re still alive.)

Substances are often prepared mixed-in with other chemicals that help them to dissolve. These substances that help with the dissolving process are known as solvents, and chloroform is used in this way. Even water can be used as a solvent.

Al Edwards, impact lead for the pharmacy research division at the University of Reading, told Newsweek: "Some solvents are often used to prepare things like lipids, but are removed after use.

"I don't know the exact process used to make the Moderna vaccine, but even if it did involve dissolving the lipid in a solvent such as chloroform, any residual amount of solvent left in the vaccine—if not fully removed—would be measured very precisely and listed as an ingredient. It would also only be allowed if it was known to be safe."

Chloroform is not listed as an ingredient in the Moderna vaccine.

The article sourced "What is SM-102?" is from Newsweek, known as "mostly factual" but lands left-center when it comes to media bias. Unlike most large American magazines, Newsweek has not used fact-checkers since 1996. In 1997, the magazine was forced to recall several hundred thousand copies of a special issue called Your Child, which advised that infants as young as five months old could safely feed themselves zwieback toasts and chunks of raw carrot. In 2017, Newsweek published a story claiming that the First Lady of Poland refused to shake U.S. President Donald Trump's hand, which was false. In 2018, Newsweek ran a story asserting that President Trump had wrongly colored the American flag while visiting a classroom, which was false. Former Newsweek writer Matthew Cooper criticized Newsweek for running multiple inaccurate stories in 2018.

More Controversies involving Newsweek's connection to David Jang and Olivet University. November 2018, the Manhattan District Attorney charged the University and three of its officials with money laundering, and conspiracy in connection with the investigation into IBT Media (which owns Newsweek).

MSM will always publish "damage-control" articles to counter negative news, especially to counter news that doesn't go along with their leftist-agendas.

We could just believe what they say – additives aren't harmful or we could look at the harm vaccines have caused for decades. Some vaccines use fetal tissue in the research and claim this tissue isn't in the final product, does that make it right? Especially since we know Big Pharma are LIARS and corrupt to the core.

People keep going on about how the BBC won't cover the lockdown protests – does that mean the protests weren't newsworthy or didn't happen – of course not. It might have everything to do with them being funded by people and organizations with evil agendas, like the Bill and Melinda Gates Foundation funding the BBC. So why would the BBC not cover those Lockdown-Protests? Bill Gates says lockdowns are needed to sell vaccines; and he wants to control the world's population through vaccines.

{Another Rabbit Hole is "who are the "fact-checkers" – Debunkers Debunked: Who Fact-Checks the Fact-Checkers? | American Council on Science and Health}

Merck said its HPV vaccine was viral-DNA free. Yet, Dr. Sin Lee found that wasn't the case. All 16 vials he tested had the DNA.

So what did The Establishment do? After this news got out, they had to do "Damage Control". And the official narrative was essentially "a little bit is okay".

Then you have a supposed health organization "explaining" how all their ingredients are safe – like the UK Vaccine Knowledge Project.

This supposed-independent project is run by what? – Centre for Clinical Vaccinology and Tropical Medicine, Churchill Hospital, University of Oxford – its medical content is reviewed by Andrew Pollard, who is the director of the Oxford Vaccine Research Group and who chairs the UK Joint Committee on Vaccination and Immunisation (JCVI). And what is Oxford involved in – a Covid19 vaccine, with the likes of Prof. Sarah Gilbert and Prof. Adrian Hill – Developers of Oxford-AstraZeneca Vaccine Tied to UK Eugenics Movement - unlimitedhangout.com

Just look at one of the other ingredients – Aluminum, which is an experimentally demonstrated neurotoxin and the most commonly used vaccine adjuvant. There have not been any clinical trials designed and carried out to test the safety of aluminium adjuvants – Aluminium Adjuvants in Vaccines: Missing Information - The Hippocratic Post

Aluminium is known to be a cause of Alzheimers Disease.

You could just go along believing what The Establishment (controlled by Satanic Eugenicists); or you could look into all those additives. 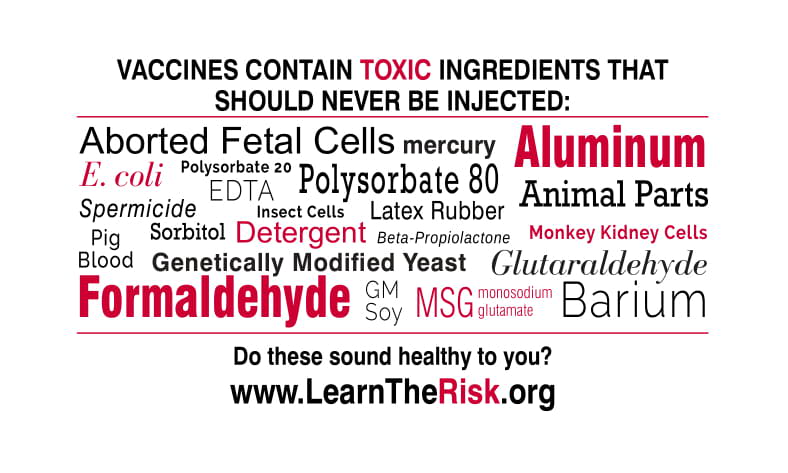 Do You Know What’s in a Vaccine? - Learn the Risk

As with all pharmaceutical products, it’s important to know what exactly you’re taking — or injecting. Vaccines are no exception.

Learn the Risk was founded by Merck whistleblower Brandy Vaughn, who said, "Gardasil is the driving force behind mandatory vaccine laws that we are seeing. She said it was Merck’s way of recouping losses from industry call it “Have to pay for Viox” vaccine, largest recall in the world. Merck got the FDA to approve 3 doses $135/dose within 6 months." Vaughn was most likely [murdered] (Sheriff's Office Investigating Death of Anti-Vaccine Activist | Edhat) in Dec. 2020. She warned if she died to investigate and its no surprise The Establishment found she died of "natural causes".

How many doses of the Covid19 vaccine are they now proposing?

This is modern-day witchcraft and their poisonous potions!

When The Lord posts news about poisons used in vaccines, we might want to take note.

The first part of my reply was something I did myself.

The commotion about SM-102 comes from the text-material on Cayman Chem's homepage.

What the articles raising the commotion about it miss is reading the source material thoroughly and seeing that Cayman Chem provides SM-102 in a solution of chloroform and that the dangerous component isn't SM-102 but the chloroform.