The Grain Craft flour mill in Pendleton was destroyed in a fire that erupted Wednesday morning.
As of 7:30 a.m. Thursday morning, firefighters from Pendleton Fire and Ambulance were still on the scene of the fire and several blocks near the mill were closed to through traffic, according to Facebook updates from the Pendleton Police Department.
A press release issued by the city Thursday says firefighters “are going to have more long days ahead of them before this incident is over” due to “the size of the building, the material inside, and the lack of safe access.”
The East Oregonian reports that the building burst into flames at about 4:30 a.m., though at 2:50 p.m. Tuesday firefighters responded to a plume of white smoke at the mill.
No injuries have been reported at the facility, which employs 22 people.
Pendleton assistant fire chief Tony Pierotti told The East Oregonian that the mill’s silos were full of finished grain, so the fire fuel load was extreme. Pendleton police chief Chuck Byram told The Capital Press the fire was caused by mechanical failure.
Authorities are describing the building as a total loss and as of Thursday were keeping the area clear in anticipation of the possible collapse of the building.
A spokesperson for Grain Craft told The Capital Press the company is working with farmers to handle supply following the fire, which came in the middle of the wheat harvest.
Jeremy Bunch, CEO of Shepherd’s Grain, a farmer-owned flour company, said there would be an interruption in flour supply as the company works to get wheat staged for movement to another mill.
“We are heartbroken by the fire that erupted at the Grain Craft flour mill in Pendleton,” said a statement from Oregon Wheat Growers League President Ben Maney Wednesday. “These silos are a reflection of many years of hard work, time, and dedication from not only our wheat producers and their families, but also the team at Grain Craft Flour.”
“The Pendleton flour mill began operation more than 100 years ago, and it was not only an important component in of providing our customers flour, but it was also a significant piece of history for the city of Pendleton and for the milling industry,” said a press release issued by Chattanooga, Tennessee-based Grain Craft and shared by police Thursday. “All of us at Grain Craft are heartbroken by the events of yesterday.”
Grain Craft is the third largest flour miller in the United States. The company was acquired by Redwood Capital Investments at the end of June.
Oregon is the 11th largest U.S. producer of wheat, which is the state's third largest cash crop, according to the Oregon Wheat Growers League. As much as 90% of wheat produced in Oregon is shipped to overseas markets, primarily in Asia.

The Grain Craft flour mill in Pendleton was destroyed in a fire that erupted Wednesday morning. 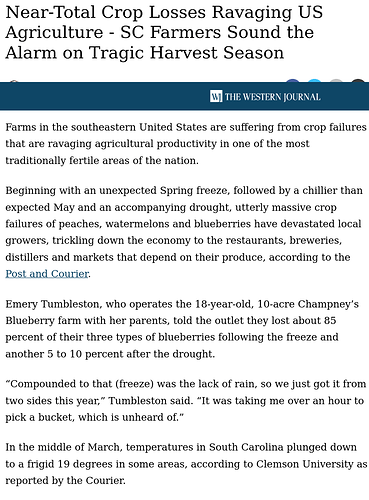 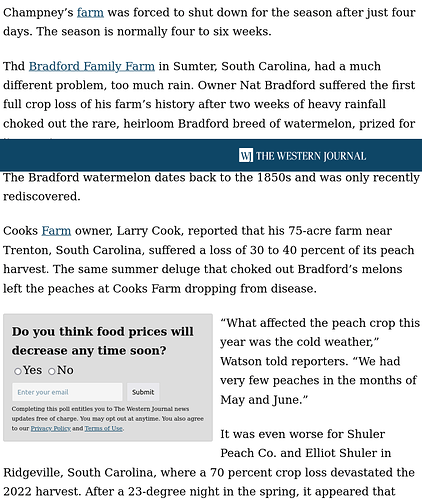 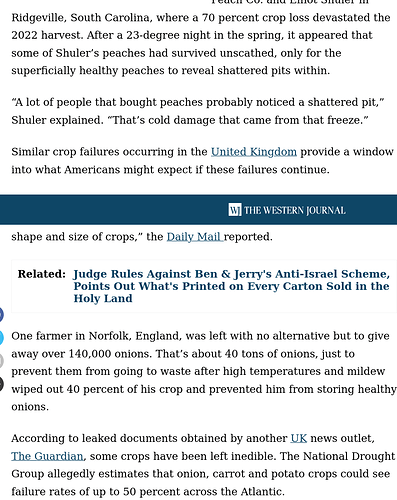 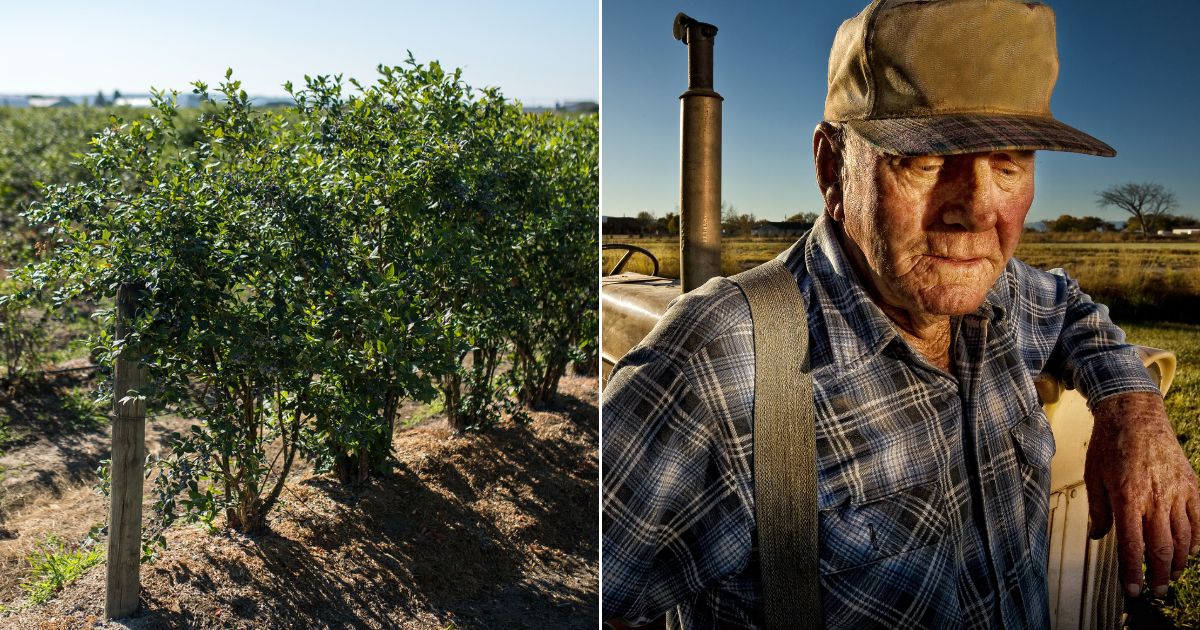 Crop failures of peaches, watermelons and blueberries are trickling down the market to restaurants, breweries, distillers and markets. 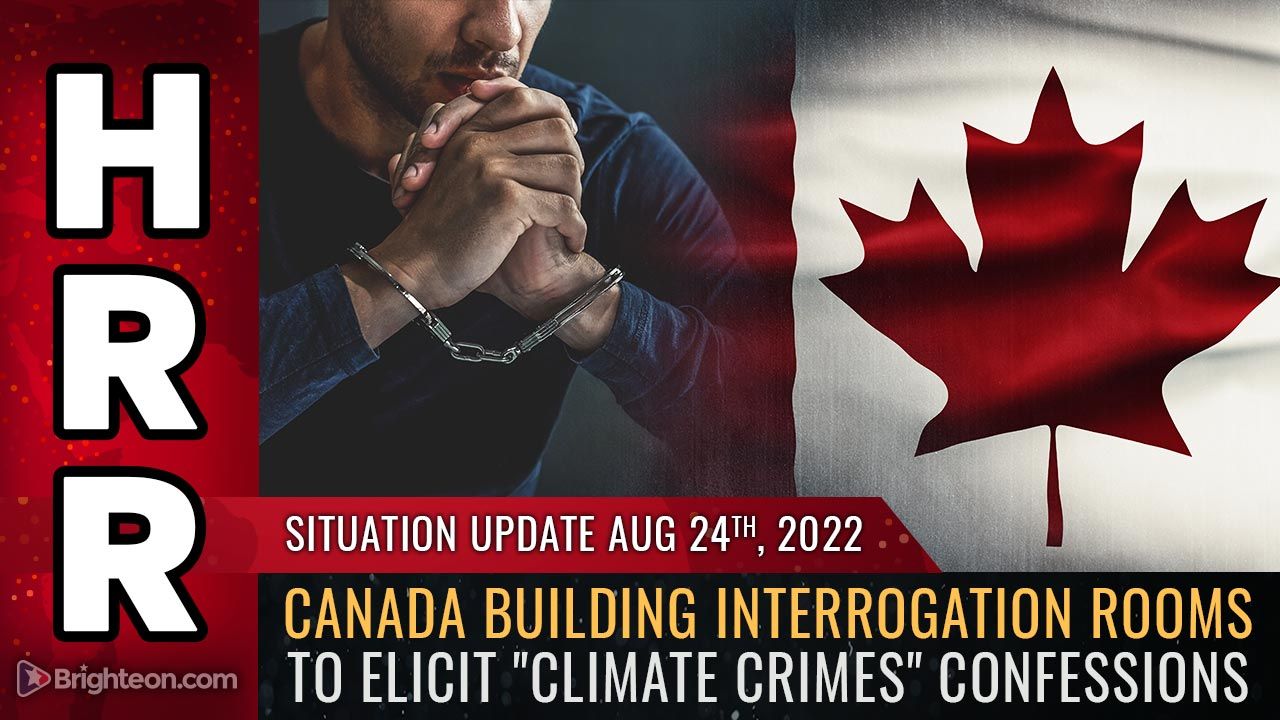 0:00 Intro1:22 Thomas Renz34:35 Other News- Blueprints leaked to alt media, showing construction of armories and interrogation rooms- The "Ministry of Climate Change" will arrest, prosecute and interrogate people at will- In Canada, environmental...

Interrogation rooms for WHO? Who do these so called "Ministry of Climate Change" people, really prisoners, think they are to going out and be arresting farmers? Who needs to be arrested?

Exactly - THEY think they are gods within themselves. 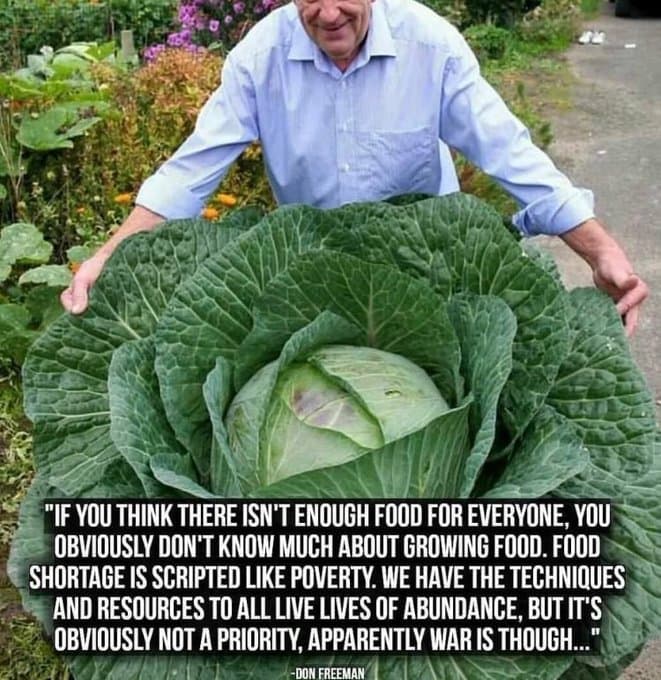 Russia’s special operation in Ukraine has been a game changer for the Kremlin’s economy. Facts show that the west’s aim to disrupt the Russian economy and pull in the gains for themselves has backfired.

Europe and the US came up with a plethora of sanctions that were supposed to initiate a severe crackdown on the Russian finances but they seem to have forgotten that Moscow’s economy, in reality, is not a bubble and is backed by physical valuable resources like oil and natural gas. 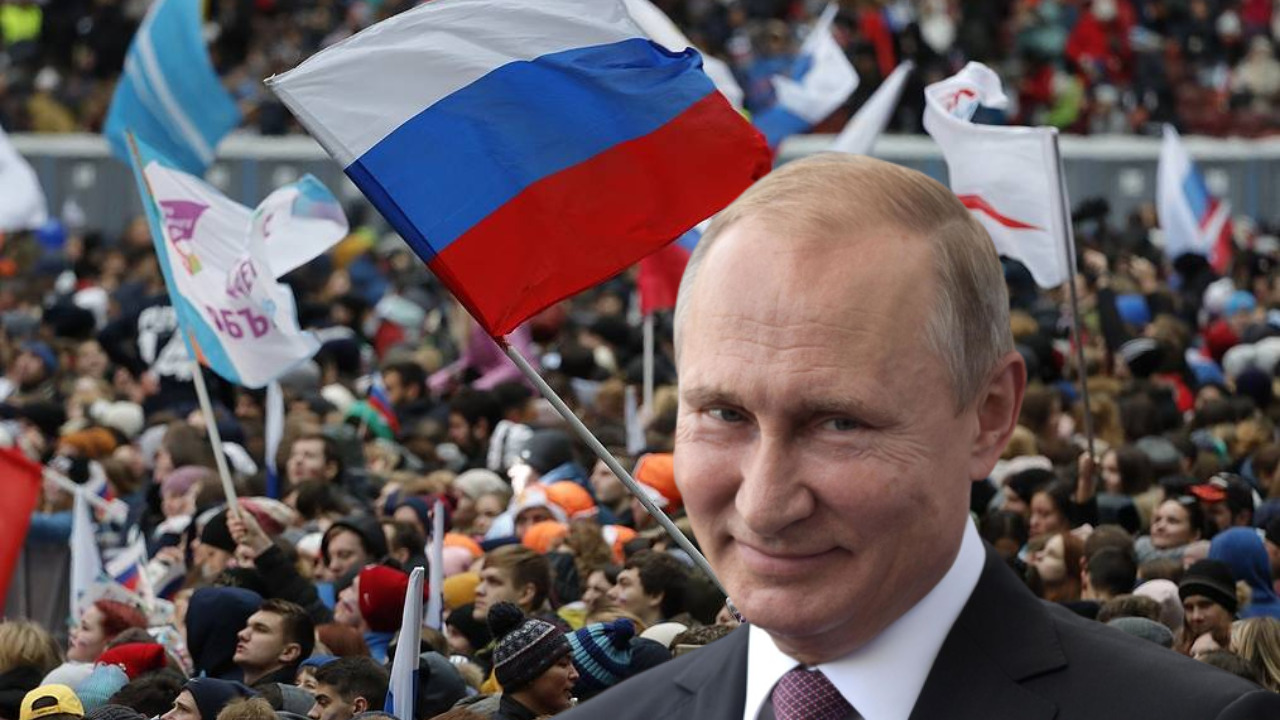 Russia’s special operation in Ukraine has been a game changer for the Kremlin’s economy. Facts show that the west’s aim to disrupt the Russian economy and pull in the gains for themselves has backfired. Europe and the US came up with a plethora of... 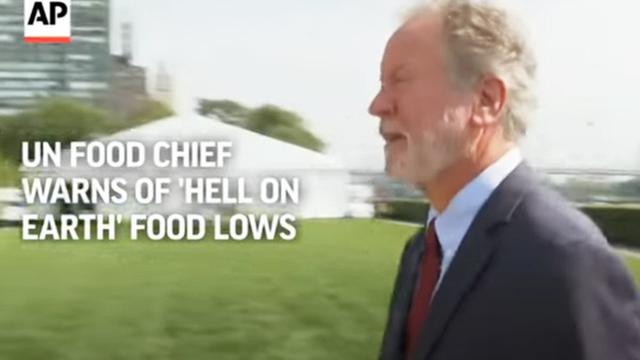 In this special report: Director Of UN World Food Programme David Beasley: In 2023 We Will Have A Food Availability Problem And It’s Going To Be Hell On Earth "I'm asking world leaders, I don't care how you feel about Russia, China, or anything. F…

LONDON - SEPTEMBER 22, 2022 - A new report from Cut Carbon Not Forests (CCNF) shows that the UK Government's plans for Bioenergy with Carbon Capture and Storage (BECCS) – on which it is currently consulting – could undermine the country's food security. The Government's official climate change advisors believe BECCS will be needed to offset 35.4 million tonnes of carbon dioxide in 2050 from other parts of the economy - like aviation and industry.

Currently, most bioenergy uses imported wood from forests overseas. This has significant negative impacts on nature and the climate. But the Climate Change Committee and the Government have signalled that they may replace these imports with energy crops grown on UK farms. While existing biomass plants can only burn wood, new ones could be built to burn energy crops.

Growing enough energy crops to make this idea work would require around 1.3 million hectares of UK land every year that is needed for food production. If that land were instead used to grow wheat, it could make 15 billion loaves of bread, or enough calories to feed 4 million people for a year.

In addition to putting the UK's food production at risk, it would also threaten nature, worsen our climate, and undermine energy security. For these reasons, the CCNF coalition urges the Government not to support any Bioenergy with Carbon Capture and Storage.

“While the Government and industry desperately want to rely on BECCS to meet net zero goals, it doesn't make sense from any angle,' said Elly Pepper, campaigner at the Natural Resources Defense Council (NRDC) and the Cut Carbon Not Forests coalition. 'The fact that the Government's BECCS plan could mean the loss of huge swathes of land needed to grow food for UK families is unconscionable.'

'The one and only reason the UK government continues to pursue this ill-advised path is its cosy relationship with Drax – the UK's top polluter and largest bioenergy generator. Indeed, the Government's current plans for BECCS reads like Drax's wish list and would hand the company billions in subsidies, whether it successfully captures carbon or not. In the midst of a climate and biodiversity crisis and record food price inflation, the government must find real solutions to prevent global warming – not perpetuate the corporate capture that got us into this mess in the first place.”

“Promising energy companies more bill payers' or public money if they install BECCS makes no sense for the climate, for energy security, nor for food security,' said Almuth Ernsting from Biofuelwatch.“This proposal is first and foremost about handing Drax more money to continue burning millions of tonnes of imported wood pellets even less efficiently than they are doing now, with devastating impacts on forests and the wildlife and communities that depend on them, as well as on the climate. Potentially, the BEIS proposal could also cause energy companies to burn crops at the expense of UK food security and UK biodiversity.'

“We need urgent actions to address the climate emergency in tandem with fuel poverty and the worsening cost of living crisis. These must include large-scale support for home insulation and other energy efficiency and conservation measures as well as for low-carbon renewable energy and heat pumps - not handing ever more funds to companies for burning wood as well as fossil fuels.” 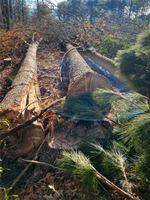 The Government's Department for Business, Energy & Industrial Strategy (BEIS) is currently consulting on the subsidies it needs to 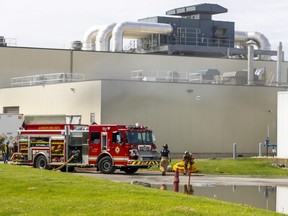 London firefighters are shown at the scene hours after an early morning fire at the Cargill chicken-processing plant in London. Photograph taken on Monday May 23, 2022. Mike Hensen/The London Free Press

Firefighters descended on the plant on Cuddy Boulevard about 4:30 a.m. after a number of employees reported heavy smoke in the building, said Kirk Loveland, platoon chief with the London Fire Department. 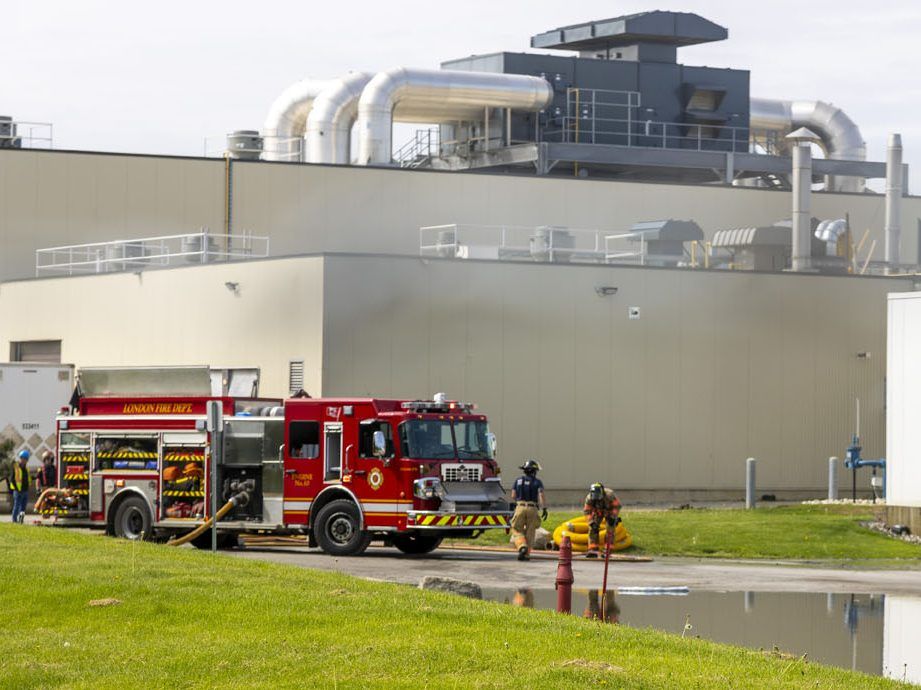 The country is slowly and quietly being undermined and taken down 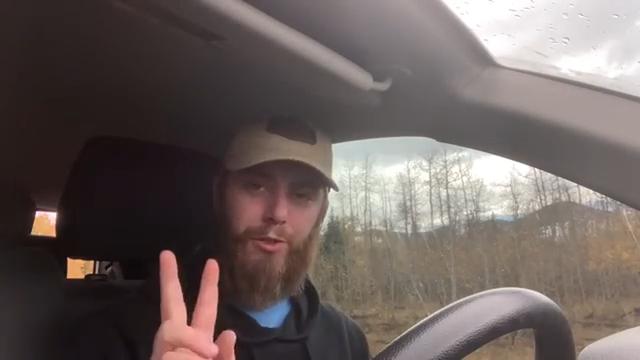 Read the post/thread at Defending-Gibraltar that contains this video: Mega-Drought & Mega Food Shortages https://defending-gibraltar.net/t/mega-drought-mega-food-shortages/1741/92?u=dg-truther-videos To survive what is coming, read/study:...

50 thousand tons of food was destroyed.

Ukraine grew produce to feed 400 million people around the world. 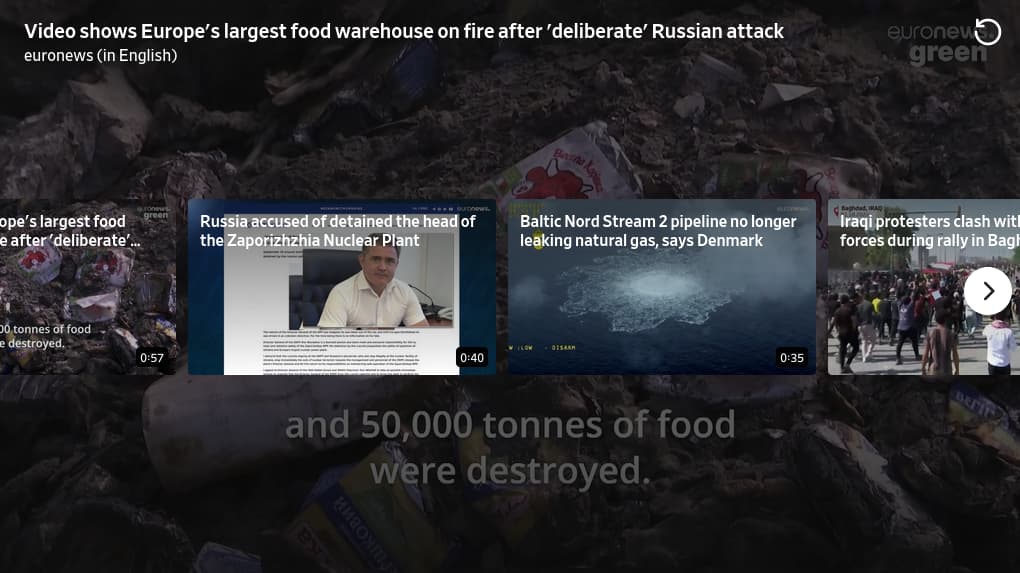 One of Europe’s largest food storage facilities has been destroyed in Ukraine.

Brovary, 20 kilometres northeast of the country's capital Kyiv, is home to multiple warehouses and has been targeted by Russian shelling. The Mayor of the city, Iho Saposhko, is convinced this attack was planned even before the war started.

“It wasn’t an accident. It was intentional. The entire food warehouse and 50,000 tonnes of food were destroyed,” says Saposhko.

"All food stores in Brovary were bombed on the same day. They deliberately destroyed food stocks destined for the whole of Ukraine.”

In the first days of the war, Russian forces managed to advance from Belarus to Brovary but Ukrainian troops halted their progress, helping to save Kyiv. 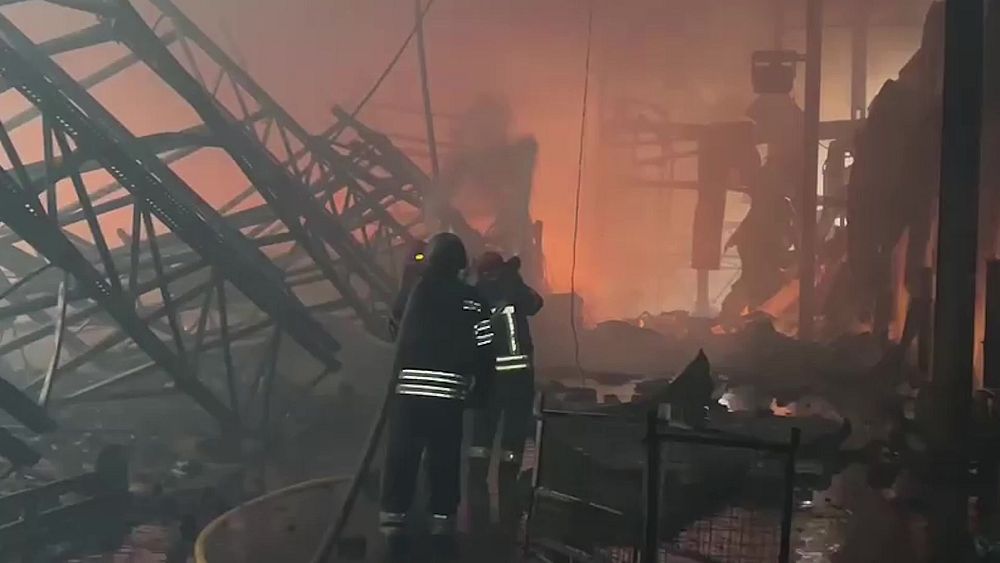 As the war in Ukraine continues and the food supply is destroyed, 45 per cent of Ukrainians are now worried about being able to find food.

One suggestion for staving off a food crisis, advanced by Irwin on Twitter last week, would be to release land temporarily from the US Conservation Reserve Program, a complex system of set-asides in which farmers are paid to remove acreage from production for 10 years at a time, and instead plant grasses or trees to create wildlife habitat, prevent erosion, and protect water quality. There are about 22 million acres in the program right now—not all in one place, but scattered across the country.

“Farmers are producers,” Irwin says. “If they’re given the access, they’ll plant.”

The War in Ukraine Is Threatening the Breadbasket of Europe

Millions of tons of grain may not make it out of the country this year. The shortfall could spread hunger and civil unrest worldwide. 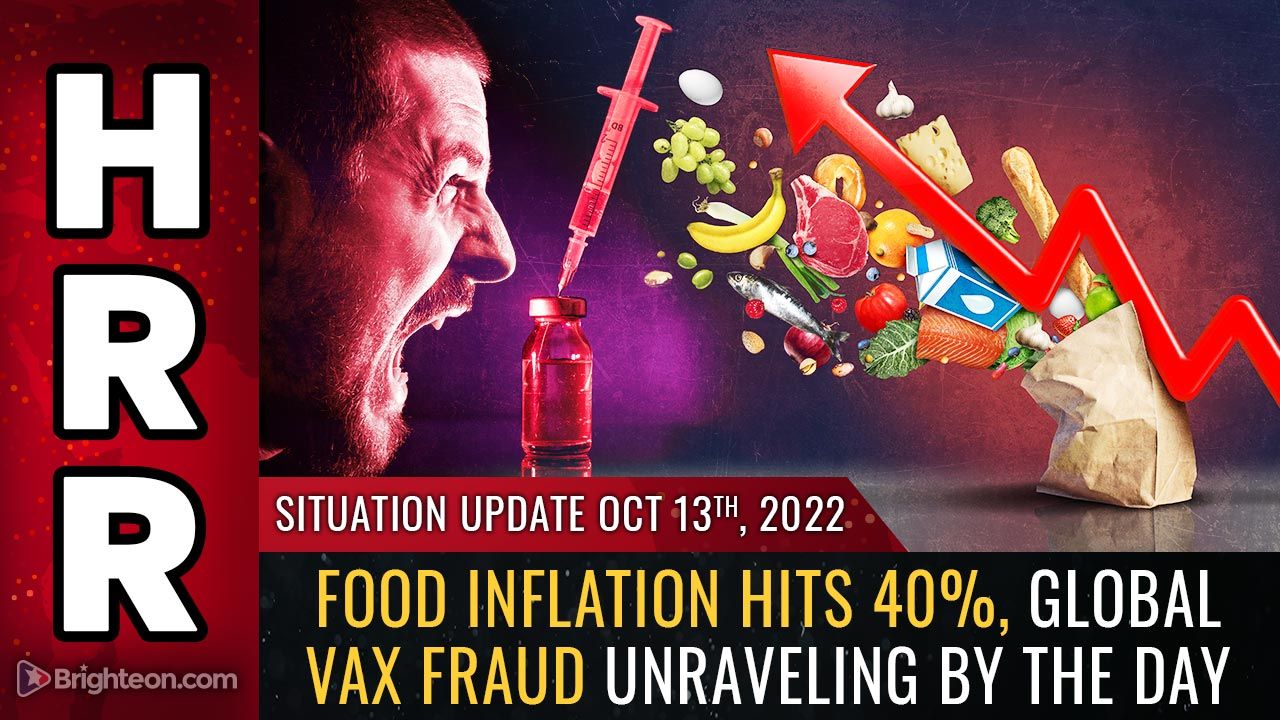 Meanwhile "BACK AT THE RANCH" 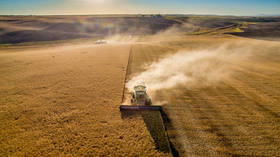 Russia’s grain harvest this year has already set a new record, the country’s Agriculture Ministry said on Wednesday on its official Telegram channel.

“To date, 147.5 million tons in bunker weight have been harvested, with harvesting still ongoing,” the ministry announced.

Russian Agriculture Minister Dmitry Patrushev later confirmed the figure at a staff meeting of the ministry.

“We expect to reap a maximum of 150 million tons. Of course, this is an absolute success for our farmers and the Russian agriculture industry as a whole,” he stated.

This year, the wheat harvest is expected to reach 100 million tons.

Patrushev recently said that Russia’s newly joined territories, the Donetsk and Lugansk People’s Republics, and Kherson and Zaporozhye Regions, would add about 5 million tons of grain per year to Russia’s overall crop.
Russia is the largest wheat exporter in the world, followed by Canada and the US. The country has already delivered about 8.3 million tons of grain to foreign markets in the 2022 agricultural year, which began on June 1. It expects to export around 50 million tons in total by July 30, 2023. 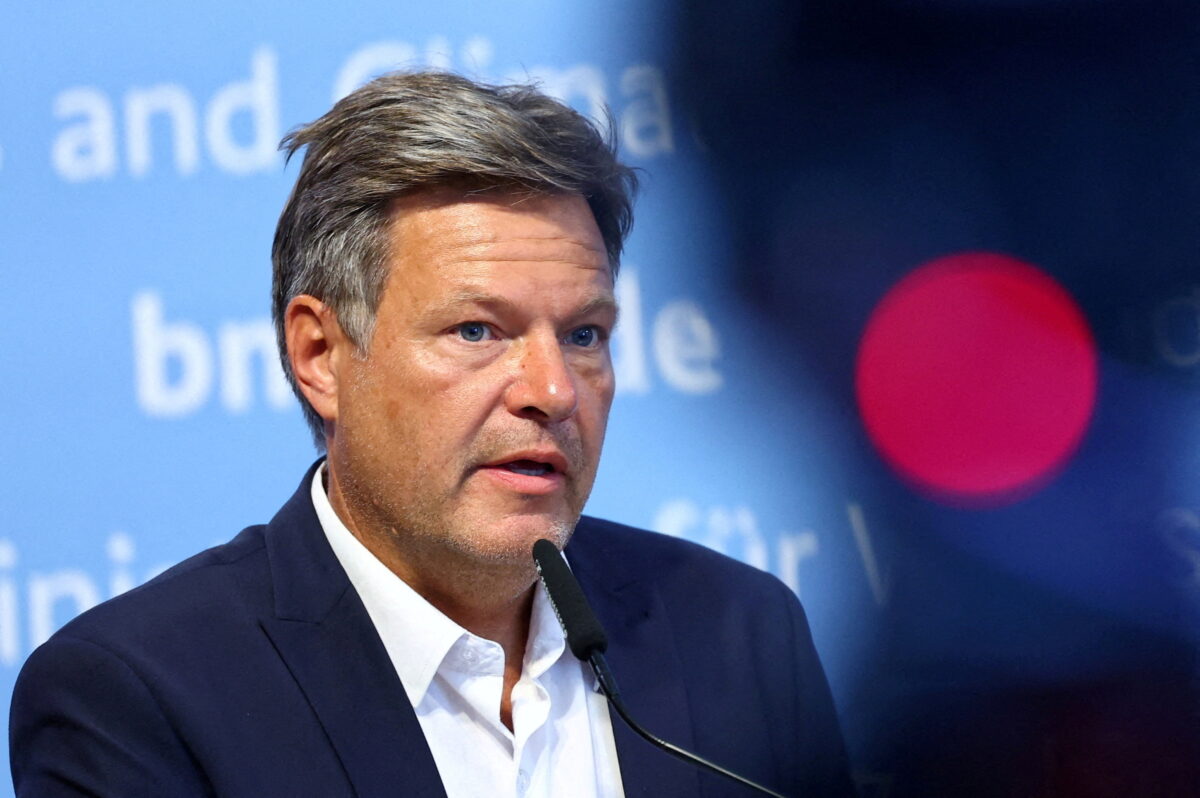 The Factor in Food Prices No One is Talking About: Wall Street

Food prices have skyrocketed, thanks to out-of-control speculation and greedy investors. They’ll climb even higher if we don’t stop them.

Americans are skipping meals because they can't afford food

A new survey by the Nationwide Retirement Institute reveals that, "nearly a quarter of young people skipped meals or didn’t buy groceries because of high inflation."
Food inflation is worsening for a number of reasons that all lead back to flawed policies by the Biden administration:

In addition, over 100 food facilities have been set on fire across America in the last 18 months in a pattern of attacks that appear to be deliberate sabotage. Someone is trying to burn down America's food infrastructure. 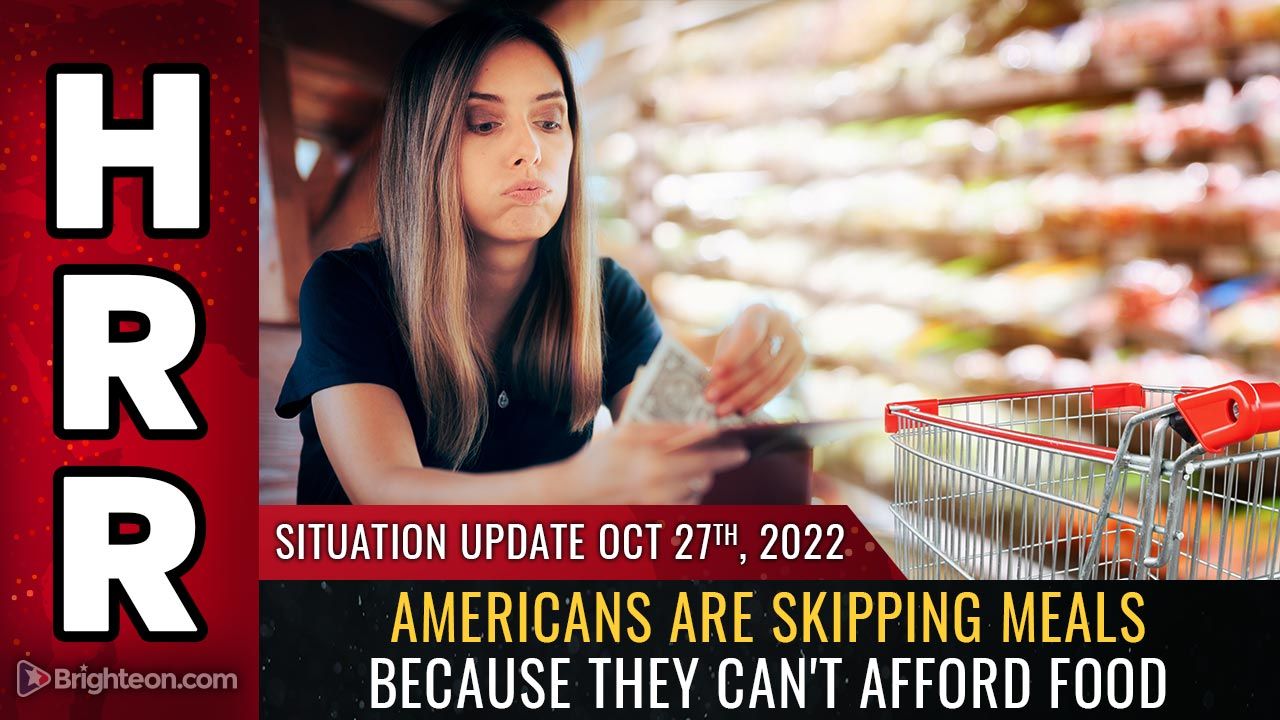 Situation Update, Oct 27, 2022 - Americans are SKIPPING MEALS because they...