The mayor of Algeciras, José Ignacio Landaluce, has called on the central government to implement “once and for all” the much-announced Plan Integral del Campo de Gibraltar, which seeks to alleviate the shortcomings of the region in matters such as infrastructure or industry, and thus reduce unemployment figures, which would help to fight drug trafficking in the area as well.

The first edition indicates that “no one can deny the results obtained with the implementation of the Gibraltar Camp Special Security Plan, which has allowed significant blows to the drug trafficking networks, with seizures of large quantities of narcotic substances, or the shapness of some of the clans who are engaged in these illicit ones. We applaud and will always be next to the State Security Forces, but here we still need it.

“The government of Pedro Sánchez was filled with his mouth in 2018, speaking of hundreds of millions of euros in investments for this region, but three years the situation not only remains the same, but has worsened as a result of the pandemic. Nothing has come from what has been promised, and Campo-Gibraltarian society is already tired of so many breaches, which are backed by the complicit silence of its co-religionists in the Campo de Gibraltar, who remain unclaimed.

Finally, Landaluce demands that the central executive “do real politics, with investments and not just gestures to the gallery. In Algeciras and the countryside of Gibraltar, we are already weary of so much sunshine, and that only promises with no date of execution, nor amounts delivered in the general budgets of the State, will arrive here. We are still being treated as third-class citizens, and neither we nor future generations deserve this discriminatory treatment by the president.

The Plan to Unite the Campo Under Christ

Advertisement José Ignacio Landaluce Calleja (Logroño; 02-03-1959), mayor of Algeciras and senator for the province of Cádiz, speaks with AS in the previous to the final of the playoffs that faces the Algerian team against Real Sociedad B, being the...

It acts as a loudspeaker and makes a projection of our land, which is wonderful. We always go out nationally with negative images when we have a lot of good things to sell. It is true that we have problems to solve, but it is a magnificent land. We have the first efficiency port in all of Europe, said by the World Bank; also the second industrial pole of all Spain; the best residential area that is Sotogrande and powerful brands of wind and sun such as Tarifa. That is why we need the promotion of Algeciras, because the triumph of Algeciras is more than the triumph of the city's soccer team, it is the triumph of effort, sports, team work and they are positive headlines in many national media . It is the Andalusian team that is going to go up. 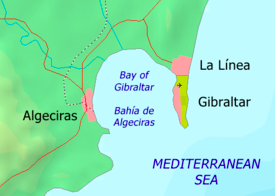 Getting on Christ's team would win the Campo of Gibraltar

English: The Camp of Gibraltar and the Rock of Gibraltar; Origins, Today and their Bright Future