Life no longer as we know it’: war in space would have immediate effects, expert says

It would no longer be “life as we know it” if a space war destroyed the satellites that the world now relies on, space commanders have warned, and China and Russia have demonstrated that they’re capable of doing just that.

Lt Gen Nina Armagno, staff director of the US Space Force, said Russia’s destruction of one of their own satellites last year was a “stunning display”.

“We’re interpreting that … as a message and demonstration of capability,” she said.

Brigadier general Michael Adamson, commander at 3 Canadian Space Division (Canada’s space force), said on behalf of Canada: “no way … holy crap, this is a topsy turvy world, you can’t do that.”

Armagno said China was openly documenting and describing their demonstrations of power in space.

“I don’t want to be dramatic,” Armagno said.

“What does war in space look like? We probably won’t see it with our naked eye but we will definitely feel the consequences from the moment it begins.”

Armagno also described China’s 2007 destruction of one of its own satellites as shocking, irresponsible and intentional. The US was also concerned about an occasion last year where a Chinese satellite with a grappling arm moved another satellite out of orbit.

Adamson said Russia’s own space program was faltering, leaving it less reliant on space infrastructure. That in turn makes it more likely to “salt the Earth”, or destroy access to space, because it has “less to lose”, he said.

There are two ways attacks on satellites could take out communication networks. A direct attack – through anti-satellite missiles, grappling arms, or hacking or jamming a satellite – is one. The other is the debris created by a destroyed satellite. Armagno said the US was still tracking 600 pieces of debris from China’s 2007 “demonstration”.

Even a tiny piece of debris could seriously damage spacecraft such as the International Space Station, which manoeuvres to avoid them. The Russian event created 1,500 pieces of debris, which threatened cosmonauts and astronauts on the ISS.

Armagno said the US and its allies, including Australia, needed to work together to make space more resilient. That included building nimbler, smaller satellites in order to replace any that are destroyed. Australia was developing a number of such satellites and the ability to launch them into orbit, she said.

“It’s important for societies to understand the relevance of space,” Armagno said.

“It’s not space for the sake of space, it really is for likeminded countries to ensure that space is free for spacefaring nations. We all share those values.”

Hogan, the Australian Defence Space Command’s space capability director general, said the use of anti-satellite technology was a “wicked” problem, in space, there’s no laws, there’s no rules, there’s no norms … and this is the area in which we find ourselves. [It’s] one of those wicked problems.

‘Life no longer as we know it’: war in space would have immediate effects, expert says | The Truthseeker 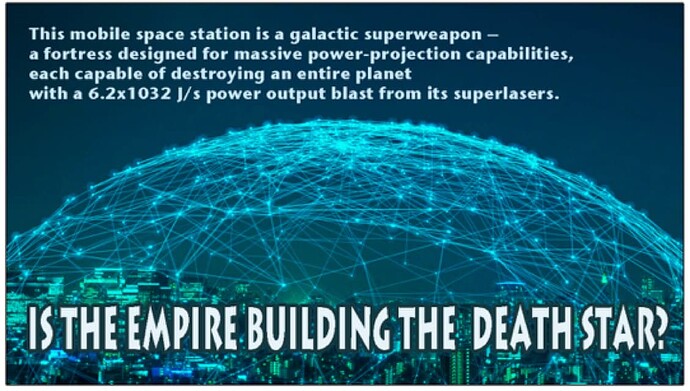 The Empire is building the Death Star – Aka Technocratic Totalitarianism