James Corbett of the Corbett Report smells a False Flag!

The Swiss Intelligence is warning of a terrorist attack on corona virus centers and manufacturing facilities, stating that these attacks would hit both large crowds and GENERATE HUGE media coverage. [Even though there are NO INDICATIONS of planned attacks] [WT..]? 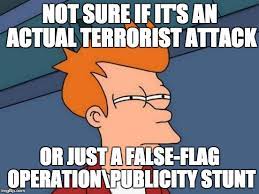 They are warning of what kinds of facilities will be hit, mass causalities, yet have NO INTELLIGENCE of impending attacks.
This is the Governments themselves terrorizing the populations, and when it happens, you will already know who to blame. Its the Homeland security apparatus used against civilians, which was built on the false paradigm of Muslim terrorists. Now everyone who does NOT COMPLY is a terrorist. The criminalization of dissent happening right NOW. Medical Martial Law... Anti mask and Anti vaxxers are being compared to suicide bombers.

James mentions the huge level of False Flag preparedness taking place, especially around the anniversary of 9/11, and the boogy men in the news lately...

This will be used fore any number of further restrictions.
The run up of terror being thrust in your faces, a reminder of 9/11

Who would have guessed it?

The war on terror...

Vinny Eastwood on The Corbett Report