In speech to ‘City slickers and banking supremos’, CM signals hopes for strong and stable post-Brexit relationship with Spain and EU 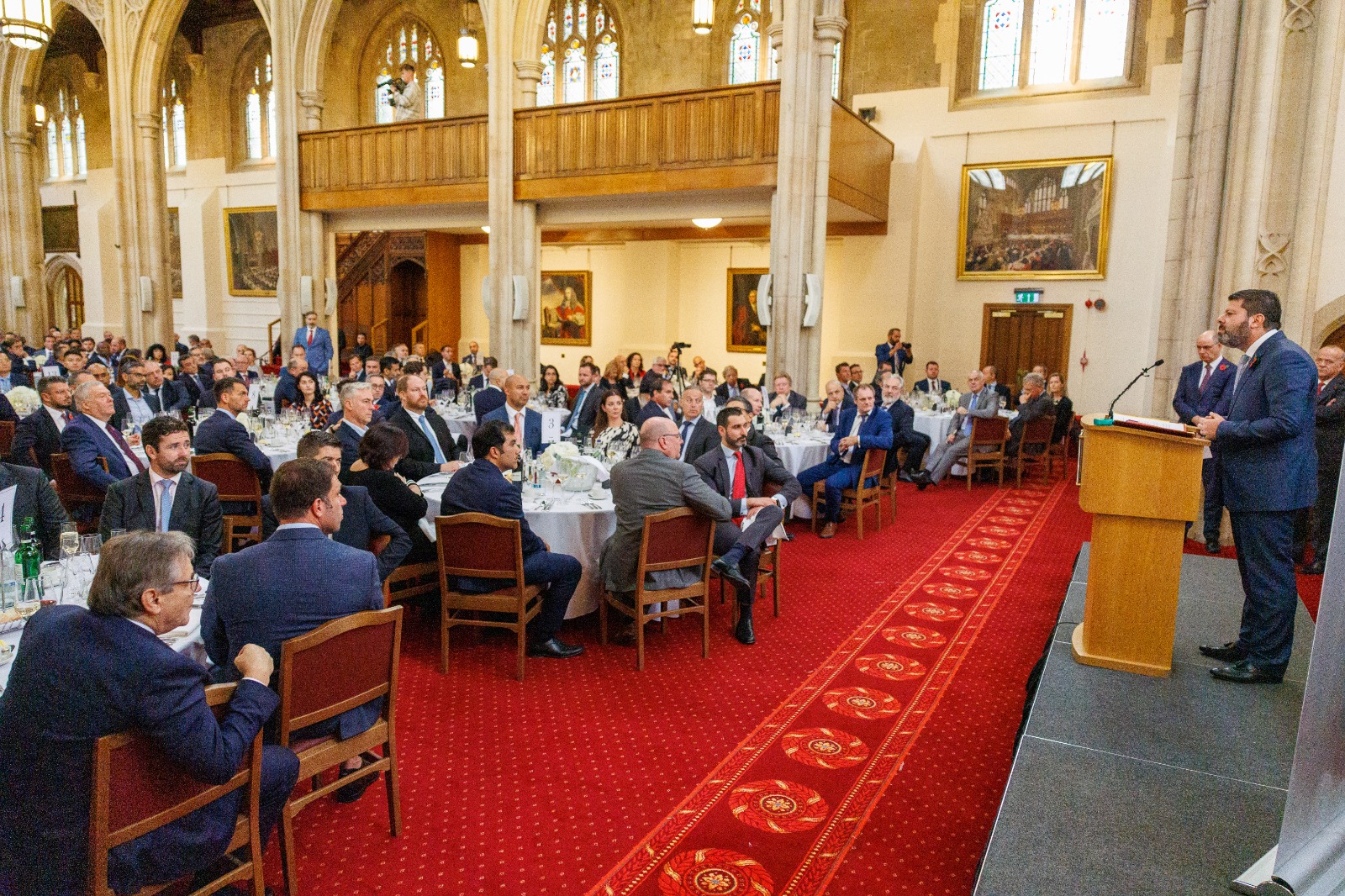 In speech to ‘City slickers and banking supremos’, CM signals hopes for...

By Brian Reyes in London Gibraltar hopes for a stable and mature future relationship with Spain and the EU that will act as “a lightning rod” for investment in the Rock and the surrounding region, Chief Minister Fabian Picardo told a packed ev...

By Brian Reyes in London

Gibraltar hopes for a stable and mature future relationship with Spain and the EU that will act as “a lightning rod” for investment in the Rock and the surrounding region, Chief Minister Fabian Picardo told a packed event at the Guildhall on Monday.

Mr Picardo unsurprisingly offered no detail on the content of the ongoing talks but sketched out the hope for a deal expressed by all sides in the negotiation, despite its technical complexity and sensitivity.

He was addressing guests from Gibraltar and the City of London at the traditional finance centre lunch, part of the Gibraltar Day in London events which are back this year after being on hold since 2019 due to the Covid-19 pandemic.

There were some 350 guests at the lunch, split roughly between a third from Gibraltar and two thirds from the City.

It was an opportunity to network too and strengthen relationships which in many cases stretch back many years if not decades. 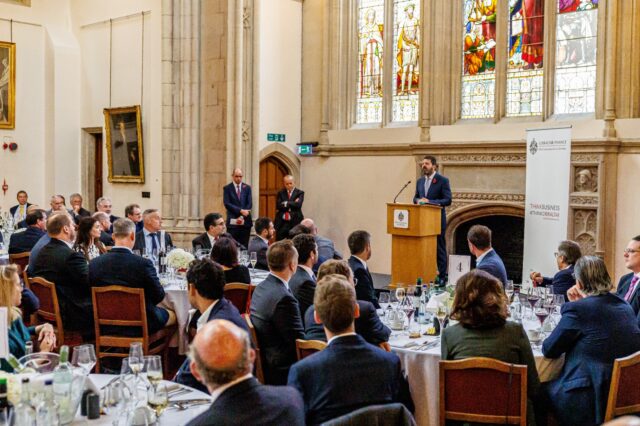 The message from the Chief Minister was positive but realistic too. While signalling optimism about the treaty talks, Mr Picardo also made clear that Gibraltar was planning in case a deal was not possible.

“In turbulent times, there is nothing better for one of the smallest of the European territories than stability, efficiency and strong international relationships,” Mr Picardo said.

“And that is where we hope to position our future relationship with the EU and our neighbour Spain.”

“Away from the easy pejorative slogans of the past [and] moving to a mature and well thought out relationship that secures fluid movement of people across our frontier.”

“Creating, with your help, even more shared prosperity in Gibraltar and the region around us.”

Mr Picardo echoed the words of UK Foreign Secretary James Cleverly and Spanish Foreign Minister Jose Manuel Albares that all sides were committed to delivering a treaty that “can put the spectres of the past behind us” while “respecting and not crossing each parties’ important concerns on sovereignty”.

The lunchtime event would normally be addressed by a UK Government minister but the upheaval of the past week in UK politics meant they instead heard from Sir Philip Barton, the permanent undersecretary at the Foreign, Commonwealth and Development Office and the UK’s most senior diplomat. 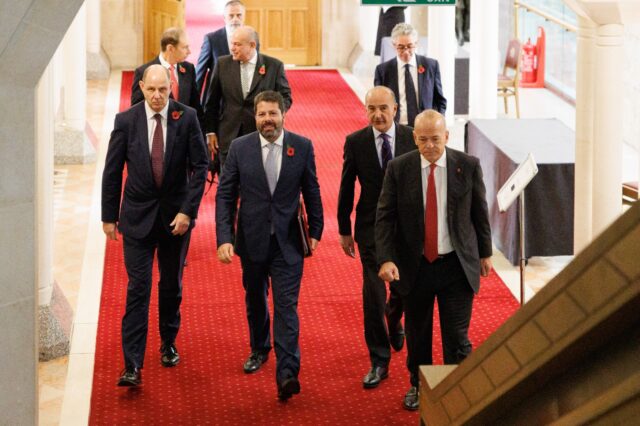 Sir Philip was no stranger to many in the room and is well versed in Gibraltar issues, having served as Deputy Governor during the period of the trilateral forum.

He underlined the UK Government’s “absolute commitment” to Gibraltar and thanked the Chief Minister for working in “absolute partnership” with the UK on the “complex and difficult” Brexit negotiation.
“These issues are technically difficult to resolve,” Sir Philip said.

“We're still hard at it, I'm confident we can work through them, I'm confident that we can do it, but it is tricky and it's political, both in Gibraltar and in Spain but also in the UK.”
“So thank you for the partnership because it is absolutely fundamental to a successful outcome.”

Sir Philip had a clear message on sovereignty too. The UK Government's long-standing position, he said, was “unflinching and unchanged and will not change”.

Both Sir Philip and the Chief Minister reflected on the past three years and how the UK had worked with Gibraltar to address the challenges of Brexit and the Covid-19 pandemic.

Both too reflected on the death of Queen Elizabeth and the Rock’s continued loyalty to the British Crown and King Charles III.

They also underlined the Rock’s capacity to adapt to new circumstances with resilience, a point also raised by Albert Isola, the Minister for Financial Services, who singled out the importance of Gibraltar’s continued access to the UK market and the crucial and supportive role of the private sector.

“We will be at the forefront of best international practice, whilst robustly maintaining and indeed developing the attractiveness of doing business in Gibraltar,” he said.

“Those established in Gibraltar must come to our fiscally competitive jurisdiction to add value to the services they provide to the clients they service in other jurisdictions.”

“We will not fall into the trap of being a place where anything is evaded or any regulatory requirement is avoided.”

“But we will keep Gibraltar growing as a first-tier business centre.”

Mr Picardo acknowledged the recent decision by the Financial Action Task Force to grey list Gibraltar, admitting it would impact the financial services sector but not jobs.

“We are not challenging the fairness of our grey listing. We respect the FATF decision,” he said.

“But the truth is that we do not believe that, objectively, Gibraltar deserves to be anything other than white listed.”

“By working with the FATF, with industry and with law enforcement, we sincerely believe that we will be able to resolve the issues that led to our grey listing in short order.”

“We are working for that to lead to early delisting, we hope as early as next 12 months.”

Mr Picardo told guests they might be wondering why a Socialist politician was wooing “City slickers and banking supremos”.

The answer, he said, was to go “beyond and behind the labels and the stereotypes” and ignore “dog-whistle politics” that had created problems in nations around the world.

He said Gibraltar sells “world class services” that created jobs at every level in its economy, and that those jobs created wealth for every sector and strata of Gibraltarian society and neighbouring communities.

“So with the current cost of living issues, it is even more important to be here, to attract and consolidate business and create more wealth so we make our public finances stronger more quickly and we create more jobs and have greater fire power to help the few that cannot make ends meet,” he said.

“That is the right thing to do.”

“Because you know, and I can assure you, that in Gibraltar the adults have consistently been in charge since the arrival of constitutional Government.”

“No dog-whistle politics and no populism. The people of Gibraltar see through that.” 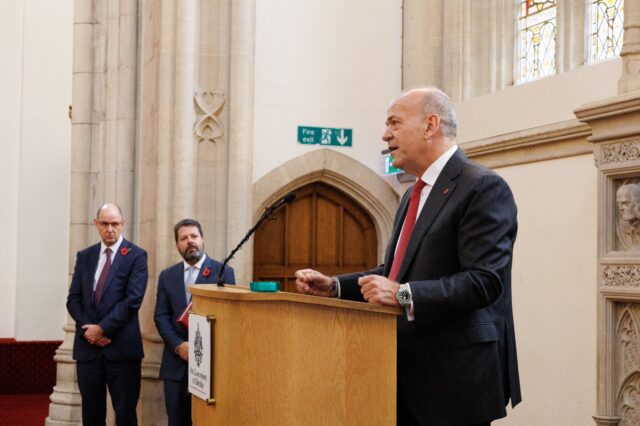