Imperial Folly: Neil Ferguson Has NO Qualification in Biological Sciences

Imperial Folly: Neil Ferguson Has No Qualification in Biological Sciences -...

21WIRE | Incompetent and unqualified, and he's still employed. That's your pandemic in a nutshell.

"This is undoubtedly one of the most extraordinary stories of the entire ‘global pandemic’ which has turned the world upside down over the twelve months.

In an article published by Lockdown Skeptics by Derek Winton entitled, The Imperial Model and its Role in the UK’s Pandemic Response, the author rightly calls into questions to relevant scientific experience of who is arguably the UK government’s most consequential science advisor of the COVID crisis – the notorious Neil Ferguson from Imperial College.

Indeed, it was Ferguson who created the original fictional scenario which was used to convince the government and mainstream media that COVID would somehow cause over 500,000 deaths in Britain unless the government ‘acted swiftly’ to institute harsh ‘mitigation’ measures such as lockdowns, or as Freddie Sayers of UnHerd describes, a “forecast that in a scenario without interventions, 81% of the UK population would become infected, and that 0.9% of them would die, ie 510,000 fatalities. That, famously, was the scenario that bounced the UK government into changing its approach.”

Like with previous pandemic scares, Ferguson was not even close, and yet here we are again."

How much braver, more confident — and aggressive! — the police look than their hapless colleagues caught on camera in June fleeing from a BLM demonstration, pursued by a jeering mob chanting ‘Run, Piggy! Run!’ http://www.thetruthseeker.co.uk/?p=213968 Some people are saying what is now obvious: that the police have become politicised. However, that is something they have ALWAYS been, as their name clearly states - Police Force, i.e. politicians’ POLICEy enFORCErs. They do not enforce The Law/…

Along with Neil Ferguson, John Edmunds is a major player in the policies involving the Covid 19 hoax. He sits on many boards, and committees which advise what countries are to do, with his modelling magic, (social distance mas, vaccinate, etc.). His wife is a big time employee of Glaxo Smith Klein, who are to make a killing with pushing the new covid 19 variant vaccine among others. GSK joined forces with CureVac to pump out, later this year, 100 million doses of CureVac's "first-generation" COVID-19 vaccine called "CvnCoV."
GSK together with another international pharmaceutical firm, Sanofi, are scheduled to start producing what could turn out to be up to 1 billion doses of their COVID-19 vaccine annually.

A German article, from Welt Am Sonntag, shows that in March 2020 government officials enlisted "leading scientists from several research institutes and universities. Together, they were to produce a [mathematical-modelling] paper that would serve as legitimization for further tough political measures." This, to keep population in a state of fear and control.

These scientists obediently wrote a modelling paper tailored to the government's instructions. The then-secret paper asserted that if lockdown measures were lifted immediately, up to 1 million Germans would die from COVID-19, some "agonizingly at home, gasping for breath," after being turned away from overflowing hospitals.

Almost all of the paper's authors and members of the modelling center's COVID-19 Working Group receive funding from the Bill & Melinda Gates Foundation (BMGF) and/or Wellcome Trust. 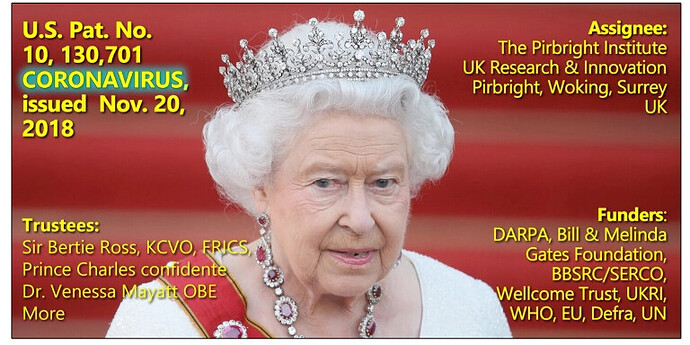 From C to Shining C

by A. Freeman, guest writer From Corona-virus to Coronation? 20/20 spiritual vision is the key to seeing through the deception There is MUCH more to this situation than a virus and the irrational f…

Here's information about two other members of this club:

Public Health England (PHE) issued its first detailed report on the new variant in late December 2020 and continues to provide updates. None of their reports are peer-reviewed. One of the highest-profile co-authors of the PHE reports is PHE director Susan Hopkins. She's also a professor of infectious diseases at Imperial College London. The college receives tens of millions of dollars a year from the BMGF.

PHE is guided in its approach to vaccination by PHE's "Strategic Priority 1" for combating infectious diseases in 2020 to 2025. It is to "Optimise vaccine provision and reduce vaccine preventable diseases in England".

Neil Ferguson is a co-author of the PHE reports and also of a widely quoted December 31 modelling paper on the dangers of B.1.1.7. He's acting director of the Imperial College London-based Vaccine Impact Modelling Consortium.

As a result, a lot of money was made by bird-flu-vaccine manufacturers, ranging from Roche (for its now-infamous, ineffective Tamiflu) to Sanofi, and they were used widely.

Ferguson also grossly overestimated the effects of swine flu, or H1N1. As a result, millions of people were needlessly given GSK's Pandemrix. It caused brain damage, primarily narcolepsy and cataplexy, in hundreds if not thousands of vaccine recipients, mostly children. The pharma giant was granted no fault in any damage claims.

Therefore the British government paid more than 60 million pounds (approximately $80 million at 2017 conversion rates) to victims. (And as mentioned earlier in this article, GSK and other pharma companies are similarly protected from having to pay damages to people injured or killed by their COVID-19 vaccines.)

Ferguson also is a member, together with Edmunds and others, of SAGE.

Another group he's a member of is the highly influential NERVTAG. It's the group that issued the January 21, 2021 warning, mentioned earlier in this article, that B.1.1.7 is deadly.

Ferguson is a NERVTAG member even though he was reported to have resigned last spring after being caught visiting with his married lover when everyone in England was supposed to only be having contact with members of their own households (based in large part on Ferguson's modelling and his urging the government to lock the country down).

Ferguson also is a member of the UK Vaccines Network, along with Edmunds and others such as the Network chair Chris Whitty, who's also the U.K. government's top COVID-19 adviser.

The network's focus, according to its website, "to support the [U.K.] government to identify and shortlist targeted investment opportunities for the most promising vaccines and vaccine technologies that will help combat infectious diseases with epidemic potential, and to address structural issues related to the UK's broader vaccine infrastructure."

These ties bind Edmunds, Ferguson and Hopkins — along with the rest of the modelling-paper mafiosi — to the bidding of governments, Big Pharma, Bill Gates and other powerful players. They present an image of being fully devoted to the public good, while in fact actively helping to destroy it.