A Little Then and Now 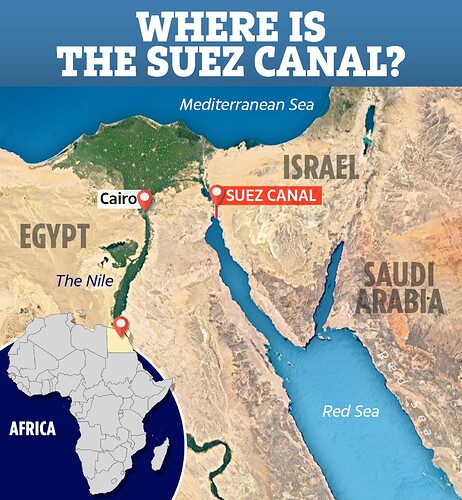 image1500×1622 247 KB
It is a waterway in Egypt, connecting the Mediterranean Sea to the Red Sea through the Isthmus of Suez and dividing Africa and Asia. The canal officially opened on 17 November 1869.

The canal had an immediate and dramatic effect on world trade. The construction of the canal was one of the reasons for the Panic of 1873 in Great Britain, because goods from the Far East had, until then, been carried in sailing vessels around the Cape of Good Hope and stored in British warehouses.

The canal is operated and maintained by the state-owned Suez Canal Authority (SCA) of Egypt. Under the Convention of Constantinople, it may be used "in time of war as in time of peace, by every vessel of commerce or of war, without distinction of flag."

The Convention of Constantinople in 1888 declared the canal a neutral zone under the protection of the British, who had occupied Egypt and Sudan at the request of Khedive to suppress the Urabi Revolt (1879 to 1882) against his rule. The British defended the strategically important passage against a major Ottoman attack in 1915, during the First World War. Under the Anglo-Egyptian Treaty of 1936, the UK retained control over the canal. With outbreak of World War II the canal was again strategically important; Italo-German attempts to capture it were repulsed during the North Africa Campaign, which ensured the canal remained closed to Axis shipping.

, stressing that it will not restrict Russian and Ukrainian vessels from passing. Sultan added that the decision is in the interest of global navigation and a guarantee to preserve this navigation and its speed, given the importance of the Suez Canal, its excellent location and its major impact on the global trade movement. It is thus necessary to keep it away from political differences or disputes, and Cairo is keen to continue doing so due to the importance of this vital facility for its national economy, he said.
Suez Canal Authority remains neutral in Russian-Ukrainian war 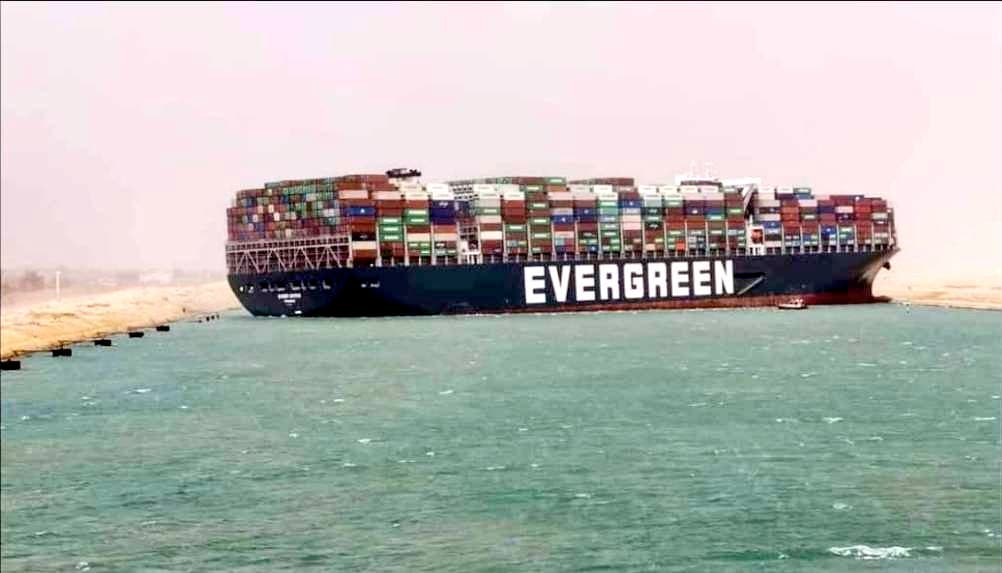 Recall that on 23 March 2021, the Suez Canal was blocked in both directions by the ultra-large Evergreen G-class container ship. The ship, operated by Evergreen Marine, was en route from Malaysia to the Netherlands when it ran aground after strong winds allegedly blew the ship off course. This is the same ship that made news concerning what was on this ship - Chapter 49 (5-10) Evergreen Traffickers Busted in the Suez Canal: The Crime Cabal’s Pedo Empire Is Going Down!.

After the incident, the Egyptian government announced that they would be widening the narrower parts of the canal.

After the Suez Canal was closed for six days as a result of a container ship blocking the waterway, the Russia and Iran met to stress the importance of accelerating the completion of the International North–South Transport Corridor (INSTC) as an alternative to the Egyptian canal. This crossing is a project approved by Russia, India and Iran exactly 20 years ago (the agreement was signed in May 2002), and a number of Central Asian and Caucasian countries that were formerly Soviet republics participated in it. Russia and Iran are accelerating their project to rival the Suez Canal – Middle East Monitor

Nov 09, 2022 - Russia Sends Second-Ever Crude Shipment To China Through “Arctic Silk Road” – Energy sanctions against Russia have helped Moscow achieve the second-ever sail of a crude tanker east through the Arctic Circle toward China, a route dubbed 'Arctic Silk Road,' that could one day revolutionize energy trade flows from Russia to Asia because it's about half the time versus Russia's Baltic ports through the Suez Canal. Even before the war in Ukraine and the resulting sanctions on Moscow, trade flows were already in the beginning stages of shifting towards the Northern Sea Route.

Nevertheless, the canal has played an important military strategic role as a naval short-cut and choke point. Navies with coastlines and bases on both the Mediterranean Sea and the Red Sea (Egypt and Israel) have a particular interest in the Suez Canal. After Egypt closed the Suez canal at the beginning of the Six-Day Waron 5 June 1967, the canal remained closed for precisely eight years, reopening on 5 June 1975.

World War III Over the Suez Canal Almost Happened in 1956 - The war began with an imperialist invasion to seize the Suez Canal. It ended with the Soviet Union threatening to nuke Britain, France and Israel.