High court in UK sides with government, buries data revealing how many children have died from COVID vaccines 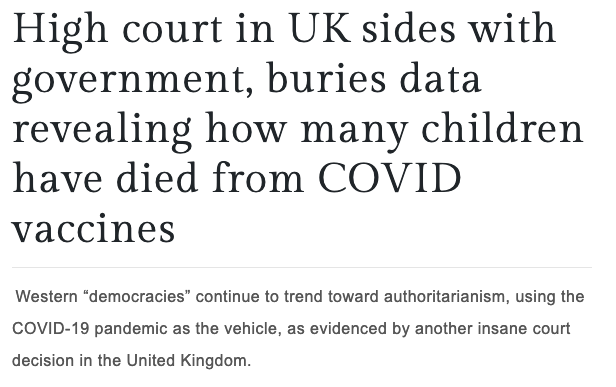 Western “democracies” continue to trend toward authoritarianism, using the COVID-19 pandemic as the vehicle, as evidenced by another insane court decision in the United Kingdom.

A high court there has ruled against a mother and has refused to force the UK government to reveal how many children have had adverse reactions from the COVID vaccines, including how many died as a result of the jabs, according to the Daily Exposé.

Only identified as “EF,” the mother requested that the UK’s Office of National Statistics be forced to release the information so that parents are better able to make informed decisions about whether or not they wanted to risk vaccinating their kids. After the ONS refused to do so voluntarily, EF filed a lawsuit to force the agency to publish the information, having been supported in her effort by television host Beverley Turner, who assisted in raising £100,000 to cover legal costs.

However, Justice Jonathan Swift struck down the request, ruling that parents were simply too stupid to understand and correctly interpret the data.

“Correlation does not equal causation, and the ONS information is not necessary to decide that claim,” he wrote.

In an interview, EF, who has daughters age 13 and 16 and are thus eligible to get the vaccine, noted that neither of them “want to take” it.

“We have no information. They can’t tell us if the jabs cause cancer or blindness and until we know, how can we make a properly informed decision?” she said.

After reviewing the safety data, the UK’s Joint Committee on Vaccination and Immunisation had recommended against vaccinating children and young adolescents but had been over-ruled by the UK’s four chief medical officers.

Meanwhile, a shocking German analysis from several countries recently found that there have been “thousands” more “daily deaths” from COVID-19 vaccines than governments are admitting, even as those same regimes continue to demand as many people as possible not only get vaccinated but also COVID booster jabs.

The analysis by University of Regensberg Prof. Christof Kuhbandner shows what he has described as an “extremely alarming situation” involving “thousands” of people who “are dying of the vaccine daily without us even being aware of it,” according to a published report.

The mortality data, which was gathered from Austria, Germany, Israel and Britain, was compiled in an Austrian analysis that was broadcast by servus.tv after Kuhbandner “happened to come across a recent preprint study in the journal ResearchGate, where the authors examined the UK ONS vaccine mortality surveillance report,” the report continued.

“Prof. Kuhbandner noted something very unusual was going on and examined the trend for the 80+ age group as well. The following are the plots for all three age groups. The peaks and deaths were offset,” the report added.

In previous years, each of the 60-69, 70-79 and 80+ groups have mortality peaks at the same time during the year (including 2020 when all suffered the April Covid peak at the same time). Yet in 2021 each age group has non-Covid mortality peaks for the unvaccinated, at a different time, namely the time that vaccination rollout programmes for those cohorts reach a peak.”

It seems rather obvious by now that Western ‘democracies’ are operating in secret when it comes to the pandemic, purposely hiding data and negative outcomes in order to continue pushing an authoritarian agenda that includes poisoning vulnerable, ‘expensive’ citizens (such as those who are older and have preexisting conditions) so they can wean them off the dole.

When more people finally understand what’s happening, there will be a reckoning for the criminal ‘leaders’ who perpetrated this pandemic.