The GSD has today requested that the Government provide clarification and confirmation of recent news reports suggesting that a floating hotel will be brought to Gibraltar and converted into 400 luxury apartments.

“Many will be aware of news, which has come to light over recent weeks, of a housing barge which seems to be arriving in Gibraltar as a floating hotel. UK press reports suggest that the accommodation barge, which is said to have been ‘languishing’ on the River Medway in the UK for eight years will be transformed into 400 luxury holiday apartments in Gibraltar.

“An online brochure, circulating in social media entitled ‘Sea Breaze, Floatel – Gibraltar’ appears to be connected to the UK news reports. The brochure provides further detail, including the apparent positioning of the vessel by the small boats marina, in front of the Calpe and Mediterranean rowing clubs. It states that the boat will “fulfil Gibraltar’s requirement for affordable accommodation”. 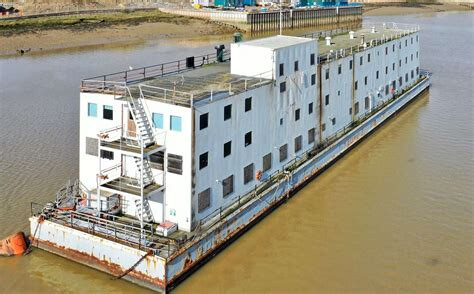 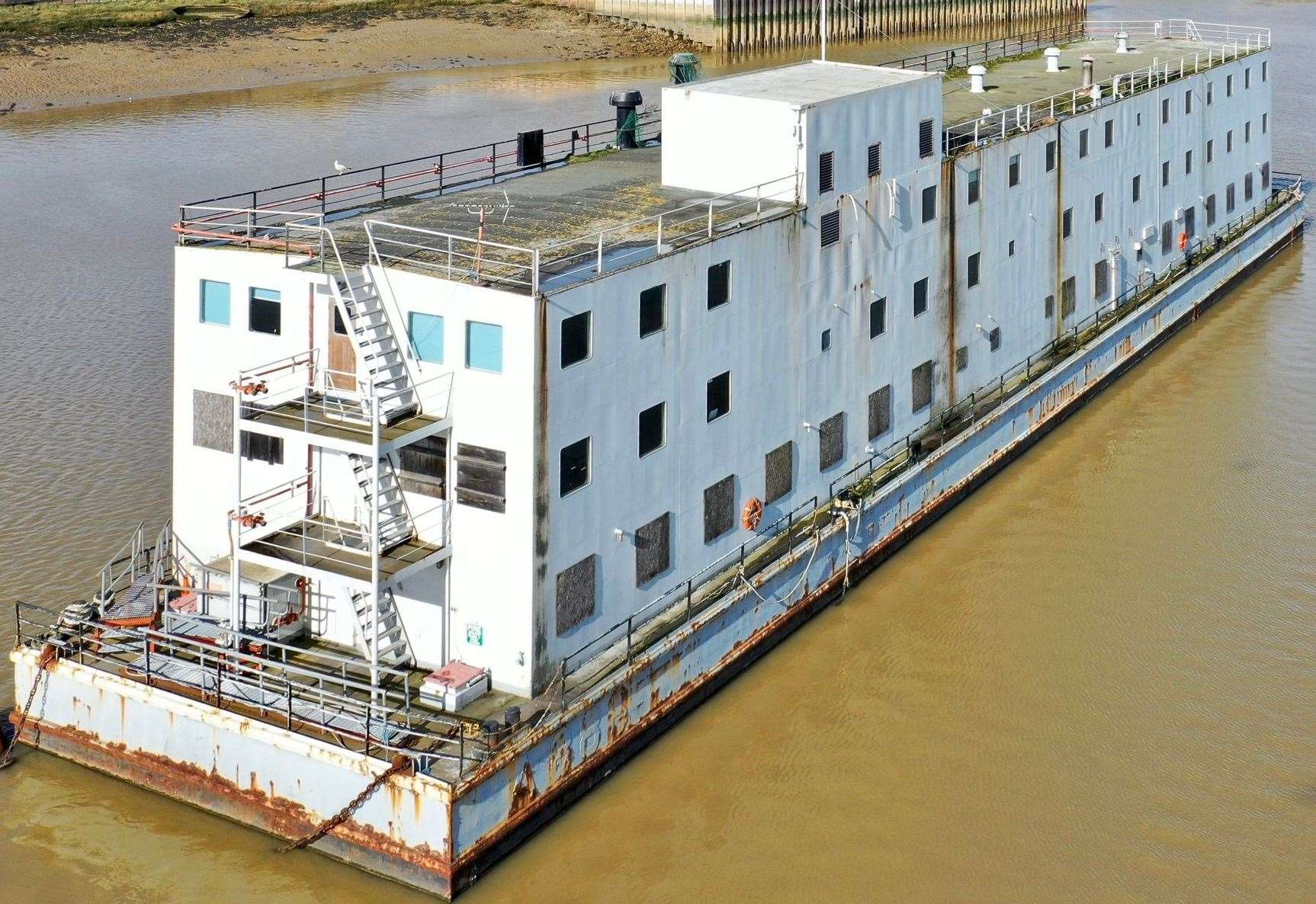 A barge berthed on the River Medway for eight years is to make a 1,500-mile journey to start a new life as 400 luxury holiday apartments.

A large temporary housing boat is setting sail for a new life on the Med after languishing on the River Medway for eight years.

A mystery businessman has bought the accommodation barge moored off Rochester to transform into 400 luxury holiday apartments in Gibraltar.

(After being refurbished) It will then make the 1,500-mile voyage to the British-run territory in southern Spain which should take around two days.

"The aim is to get it up and running for Christmas. The new owner has lots of plans for the floating hotel, including a revolving roof and is willing to throw money at it."

HUM... In a month's time, this ugly monster will be turned into a luxury hotel?

Another story before its sale - 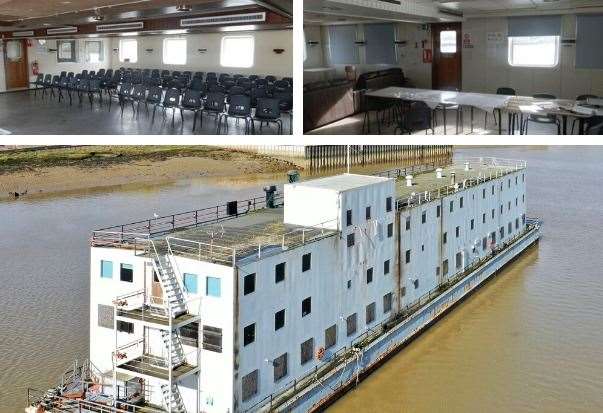 Inside Kent's abandoned floating hotel as it leaves the county

An abandoned floating hotel has been towed away after eight years on the River Medway.

Rumoured uses were surplus housing for overcrowded prisons, digs for construction workers; and even touted as refugee housing, or for corona isolation. 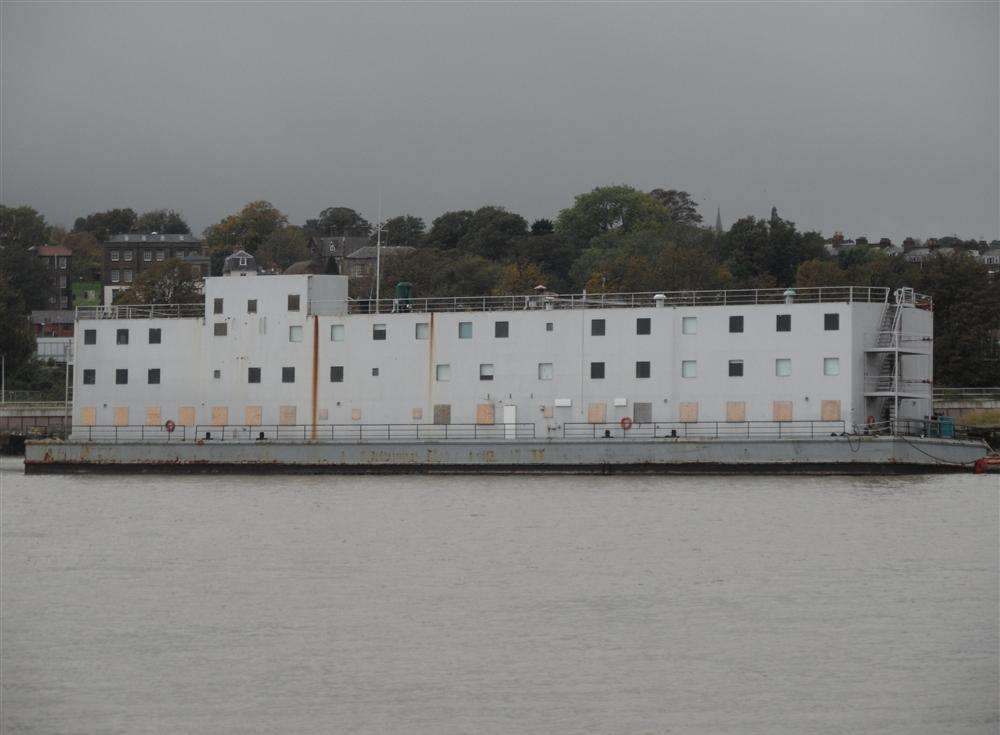 A prison, a hotel or a temporary accommodation for workers? This huge barge has got people guessing ever since it arrived in Rochester.

A massive boat, resembling a floating block of flats, has had people scratching their heads since it moored up in Medway.

Agents Sanderson Maritime, based in Merseyside, were keeping tight-lipped as to what she is doing here. The owner of a barge reportedly heading to Gibraltar has had preliminary discussions with the government about operating a floating hotel here.

However, it stressed that no location has been earmarked, and all discussions are at an early stage. This comes after the government initially told GBC that none of the proposals it has received involve this particular vessel.

Reports first surfaced about the Medway Barge in the online portal, Kent Online news last week. It announced that the accommodation barge was set to leave Rochester for a new life in Gibraltar.

The report referred to a “mystery businessman” who had purchased the barge and planned to transform it into 400 luxury holiday apartments in Gibraltar.

Marine construction Manager Greg Chalmers told Kent Online the barge – to be renamed Sea Breeze - would be completely refitted and should be up and running on the Rock by Christmas.

GBC asked the Government whether it had any knowledge of this project. It said it had been approached by a number of potential operators of luxury floating hotels. However, no new permissions have been granted for Gibraltar. Insofar as it was aware, none of the proposals involved this vessel.

However, GBC learned that the owner of the barge was a UK businessman called Richard Hunt. We telephoned Mr Hunt and asked him to confirm if the barge was coming to Gibraltar. He denied the story, and dismissed it as a false rumour. He also denied speaking to any Ministers on the Rock.

But GBC later learned that Mr Hunt had travelled to Gibraltar very recently to look at possible locations for the barge. Both Ocean Village and Queensway Quay marinas told GBC the vessel was not destined for their marinas.

That leaves the Government-owned small boats marina, at Mid Harbours, which issued an expression of Interest published towards the end of last year, to develop the northern most end of Peter Isola Promenade

GBC sent further questions to Number Six, this time including Richard Hunt’s name. The Government said: Mr Hunt is one of a number of investors who have approached the Government about operating a floating hotel in Gibraltar. It said, no location has been earmarked and all discussions are at an early stage.

The Sea Breeze flotel is the subject of a glossy brochure showing CGI drawings of the vessel berthed in the Mid Harbour marina – at the location that was put out to tender. The deadline for expressions of interest was the 20th November 2020.

The brochure offers an insight into the proposed development of the barge into a luxury hotel and names Mr Hunt as the developer.

Also mentioned is local interior design company, Sacarello Interiors, who in answer to GBC questions, confirmed they were first approached by an intermediary a year ago. However, the company said has not been involved in any negotiations or discussions with the government since then, and are unaware whether or not the project is going ahead. 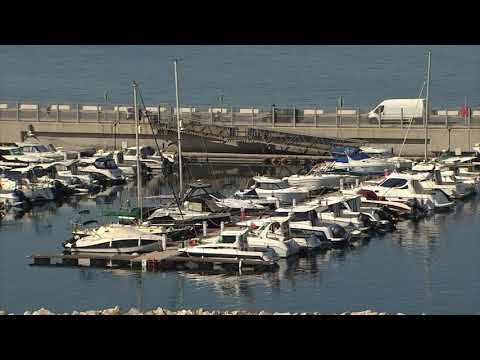 Just a bit of information with screen shots in case these sites disappear. It looks like someone was securing the brand Sea Breeze in the hopes of it becoming a reality.

Did Seabreeze or person(s) behind Sea Breeze secure a Gibraltar website - seabreeze.gi (although it is not working - at this time). 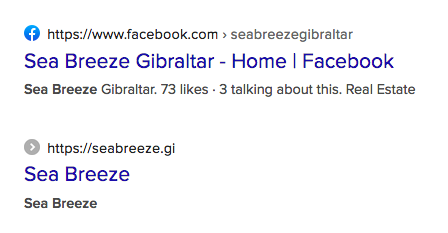 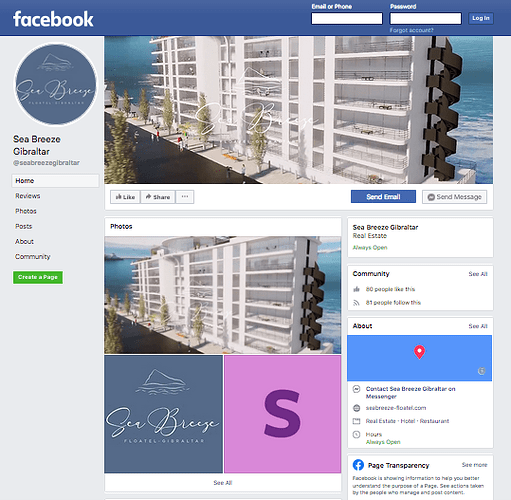 Chris Clinkard posted a comment on March 1, "Well done Sea Breeze Gibraltar and Tom Amer and Gibraltar Government for pulling this together. Brilliant and exciting use of space."

The comment was liked by Malcolm John and Joao Maia E Silva.

(The vessel, built originally for the Dutch Navy and which sleeps more than 200 people, has moored on the river at Rochester. Hillside, described as an accommodation barge, arrived from Portsmouth and is up for sale or available for hire - Mystery of huge 'floating hotel' moored off Rochester) 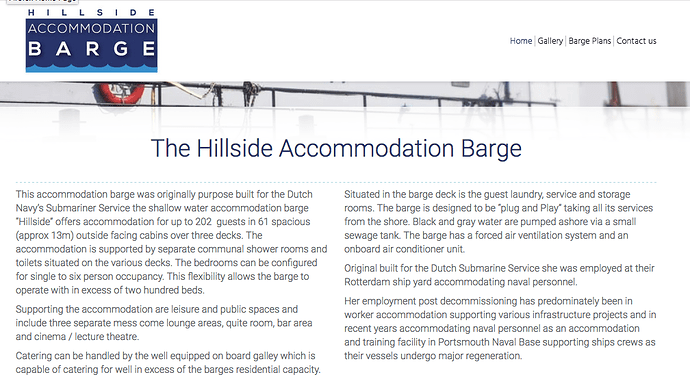 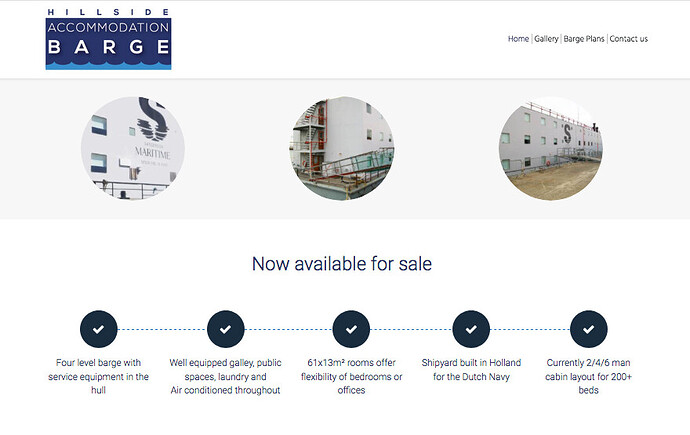 There is also a video tour of it. Obviously, this is old because the barge doesn't look as derelict as it does now.

Here's another site about its sale Accommodation barge Hillside for sale by sealed bids | DSB Offshore Ltd - Sealed bids for the purchase of the barge, “as is where lies in Rochester”, should be submitted to DSB by 13h00 GMT on 26th February 2018. The GSD is again calling for answers regarding the ‘Sea Breeze’ floating hotel, claiming the Government's statements to the media are contradictory.

The GSD says the fact that the Government had initially denied having had any dealings regarding this particular vessel is cause for concern.

The Opposition party adds that given the professional look of the brochure and the UK press reports, which identify the location as the Small Boats Marina opposite the rowing clubs, seems to point to a "done deal" - along with the fact that a local company has been identified as the entity contracted to carry out the re-fit.

It says the Government needs to come clean, stop misleading the public and disentangle itself from the conflicting web of its own creation. 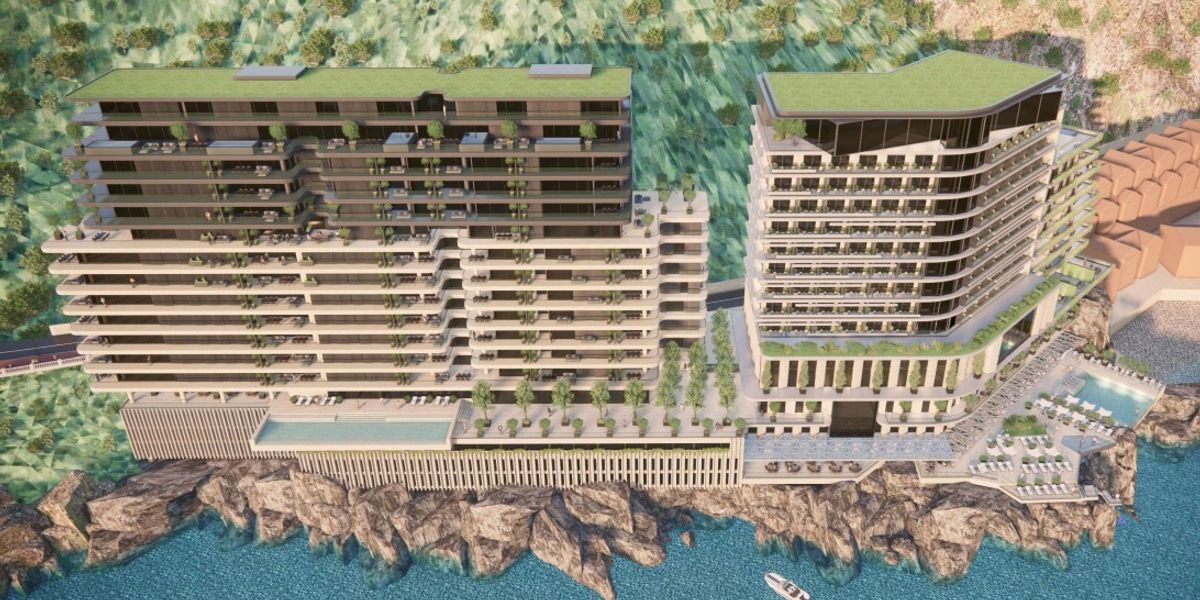 The iconic Caleta Hotel closed its doors for the last time at the end of 2021, but a new outline planning application filed this week signalled plans for a new luxury hotel on the site that will change the face of the east side of the Rock if approved. The Caleta Hotel, opened by the... 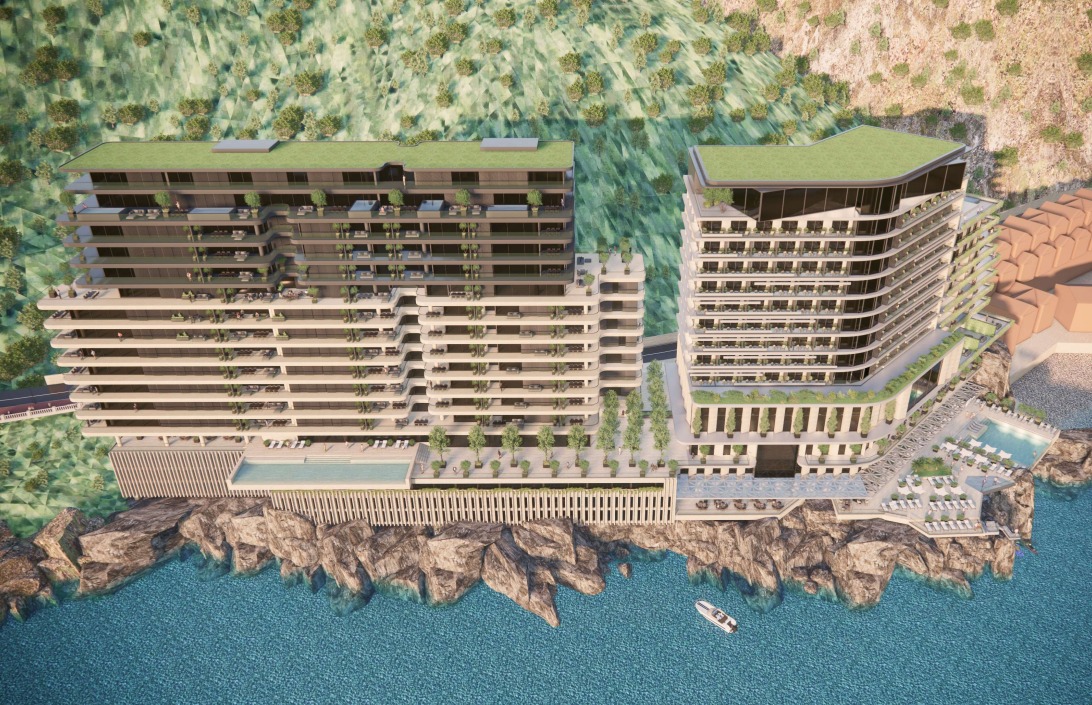 The iconic Caleta Hotel closed its doors for the last time at the end of 2021, but a new outline planning application filed this week signalled plans for a new luxury hotel on the site that will change the face of the east side of the Rock if...