Govt has lost financial control of a GHA ‘in crisis’, Phillips says 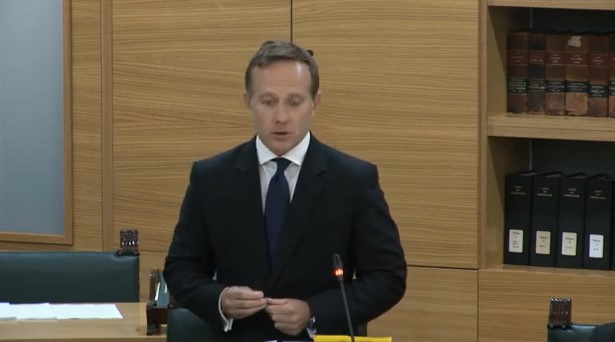 Govt has lost financial control of a GHA ‘in crisis’, Phillips says

The Gibraltar Government has lost budgetary control of the Gibraltar Health Authority, which is now “in crisis”, GSD Shadow Minister for Health Elliott Phillips told Parliament. In a speech during the budget session, Mr Phillips echoed the par...

In a speech during the budget session, Mr Phillips echoed the party’s longstanding concerns about the government’s handling of public finances and said more needed to be done to ensure efficiency and value at the GHA, which accounts for the largest segment of public spending.

He praised the response of GHA staff to the Covid-19 pandemic but said the past year had exposed “deep cracks and fault lines” in how Gibraltar’s healthcare system was managed and delivered.

“The GHA, as a treasured institution, must be protected, preserved and allowed to manage itself devoid of ministerial interference in the minutiae of the day to day running of a health service,” he said.

The cost of running the GHA reached nearly £300m over the past two years and is forecast to reach £131m in the current financial year.

And while Covid-19 had required additional funding for healthcare services, there was a need for greater focus on how the GHA was run, particularly at a time when the authority was struggling to restore routine services against the backdrop of yet another rise in virus cases.

“The GHA has faced arguably the biggest challenge in its history with Covid but there is a crisis in healthcare that goes beyond Covid and its needs to be remedied,” he said.

“I feel at times that we scratch the surface of the GHA in this place and given that it is the largest single costs to the taxpayers, the professionals within the service deserve better, patients deserve better and the public deserve efficiency and value for money and not waste.”

By way of example, he cited the rise over the past two years to £33.6m in the cost of the sponsored patients scheme, despite earlier efforts to rein in spending by repatriating services to the Rock.

He highlighted too the “staggering” £21.5m spent on prescriptions, drugs and pharmaceuticals; recruitment expenses of nearly £3m that indicated a high turnover of staff; and a £2.4m bill in compensation and legal costs.

“These are just a few examples of the costs of the GHA to the public and whilst it is rightly a treasured institution, it would appear that the Government has long abandoned its policy and war of wastage and inefficiencies within the GHA,” he said.

“They have lost budgetary control of the GHA and it is in crisis.”

Mr Phillips expressed deep concern at the absence of a specific budget for mental healthcare, despite this being a recommendation of a highly-critical report prepared by Public Health England.

He said this failed to heed the warnings of all mental health charities who had repeatedly voiced concerns about mental health provision in Gibraltar.

“The failure to provide for a mental health budget in this [budget] book is to perpetuate the stigma of mental health and reinforce the widely held view that the Government is failing our people in the provision of mental health in our community,” he said.

“Put more simply, the conduct of the Government and the failing to heed the criticism of Public Health England, it is to ignore the cries from families who have lost young men to suicide, it is to disrespect the memory of those who have died because they lost hope and didn’t have the support from mental services that they should have had as a modern progressive community have.”

“Critically this budget fails to address the mental health provision deficit in our community and given the particular focus of mental health its absence given this year in particular is unforgivable.”

In this context, he focused on the fact that the government budget did not provide for the recruitment of a consultant clinical psychologist, adding that after “years of abuse and mismanagement of our public finances we cannot replace a key and critical role within our mental health services”.

“This is a scandalous discovery which the Government are attempting to remedy by the provision…for two new supernumerary posts which fail to support continuity of care for the most vulnerable in our community,” Mr Phillips added.

“The sheer lack of understanding or ignorance of the scale of the mental health problem amongst the Government is staggering.”

“Even after receiving one of the most damning reports in our history which they sat on for two years before they published they don’t event take into account its most critical findings.”

Mr Phillips again raised a letter sent by the GHA’s Professor Derek Burke, the head of clinical management, alluding to “avoidable deaths” and “a cabal” of individuals allegedly hindering at at the GHA.

“It is clear whatever you make of that letter that there is something systemically wrong in the management of the GHA,” he said.

“For a very senior office holder to make serious accusations against a cabal of individuals within the GHA alluding to preventable deaths with the GHA, irrespective of the accuracy of the statements, should provide everyone in this House with a serious degree of concern about how the GHA is operating and the abject failure of the Government to resolve issues with the GHA.”

“Whilst we have come together at the worst of times in living history, we have also exposed serious failings by the Government in leadership at the GHA and putting mental health strategy front and centre.”

Focusing on his other portfolios, Mr Phillips said the government’s performance on environmental issues had “very little substance” and lacked an “ambitious plan”.

He highlighted in particular air quality issues and said nothing was being done despite Gibraltar’s “very poor air quality”, contrasting that to the government initiative last year to encourage new car purchasing.

“The message to the public [was] buy a new car, your old car will be taken off the street,” he said.

“[But] they got it wrong and there has been no removal of older polluting cars from our streets.”

“They have simply been sold on the second-hand market, increasing the number of cars on our streets.”

He said the Minister for the Environment, Dr John Cortes, tried to “play to the gallery” on the critical issue of climate change and the reduction of emissions, but “has done nothing” to improve the environment.

“The dockyard continues to pollute our air and conducts 24-hour working, 50cc motorcycles continue to plague our streets with noise and fumes with no prospect that the Government will take bold steps towards banning their use, those that litter, dump and pollute our coastline indiscriminately [face] no real penalty or heavy sanction,” he said.

And he added: “The environment must be absolutely central and integral to all Government policy and the budget and for the Government to put this fundamental issue at the periphery given the key role it plays in our quality of life is a gross dereliction of their duty to future generations of Gibraltarians.”

“The Government have failed to provide a safer, greener, cleaner and child friendly city as they promised and I will not stand idly by whilst the lungs of a generations of our people continue to be damaged by very poor air quality, noise pollution, concrete dust, black smoke and endless fumes from traffic.”

On transport, he said Gibraltar needed a world-class, clean and reliable public transport system to encourage people to leave their cars at home in favour of more efficient and environmentally friendly forms of transport.

But he said the government lacked ambition, imagination and a well thought out plan in this regard, including a joined-up initiative with the Ministry for Justice to educate traffic offenders.

“If we are serious about changing the way our people moving about our city and winning the argument that car use should be abandoned in favour of public transport we must instil confidence that our transport system plan is robust and serious,” Mr Phillips said.

“We must also carefully plan what we want our city to look like in 50 years.”

“At the moment buildings are going up without the slightest thought as to how we want our community to look like and with an aging road and utilities infrastructure it is only a matter of time before we have to start digging up our roads again.”

Seems like all countries are following the same orders with regards to mental health. The stage is being set to enable the thought police to outlaw free thinking individuals. Always disguised as a humanitarian endeavors, the traps are being laid out to criminalize, stigmatize, or institutionalize those whose opinions differ from the governments.

DARPA, who was involved with the funding of the patent on the corona virus is involved with another covert overreach. https://hannahmichaels.wordpress.com/2020/04/12/from-c-to-shining-c/#jp-carousel-4052
From C to Shining C | Time To Think

Promoted as a way to “end cancer,” this resuscitated “health DARPA” conceals a dangerous agenda.
The proposed agency would merge “national security” with “health security” in such a way as to use both physical and mental health “warning signs” to prevent outbreaks of disease or violence before they occur. Such a system is a recipe for a technocratic “pre-crime” organization with the potential to criminalize both mental and physical illness as well as “wrongthink.”

Eric Lander, with his ties to sex offender Jeff Epstein is promoting this agenda to the Biden administration, which follows the lockstep agenda.

SAFE HOME would suck up masses of private data from “Apple Watches, Fitbits, Amazon Echo, and Google Home” and other consumer electronic devices, as well as information from health care providers to determine if an individual might be likely to commit a crime. The data would be analyzed by artificial intelligence (AI) algorithms “for early diagnosis of neuropsychiatric violence.”
According to World Economic Forum luminary and historian Yuval Noah Harari, the transition to “digital dictatorships” will have a “big watershed” moment once governments “start monitoring and surveying what is happening inside your body and inside your brain.”

He says that the mass adoption of such technology would make human beings “hackable animals,” while those who abstain from having this technology on or in their bodies would become part of a new “useless” class. Harari has also asserted that biometric wearables will someday be used by governments to target individuals who have the “wrong” emotional reactions to government leaders.

Yet, in this case, instead of only losing our civil liberties and control over our external lives, we stand to lose sovereignty over our individual bodies.