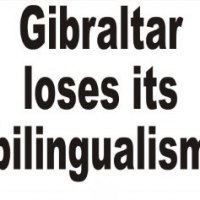 Gibraltar has always prided itself on the bilingual nature of its people, who for decades have been largely fluent in both English and Spanish to varying degrees. Yet at some point something changed and Spanish is now used less and less particularly by the younger generation.
IDENTITY
The identity of a people is an evolving concept. This means that it is not stuck in a time wharp and the factors which contribute to the make-up of a nation often changes as the decades go by. The role of language is no exception to the rule. It is interesting to see how Gibraltar has gradually transformed itself from a society where Spanish was spoken at home and English was spoken in school and at work, to a society where the degree of Spanish spoken has reduced considerably.

EASY OPTION
The consequences of this for young people are very clear. The Spanish language is no longer regarded as an easy option at school, particularly at A’level when it is based on literature, which means reading, understanding and interpreting books written in a language that is no longer as familiar as it once was. This does not mean that students are avoiding Spanish, far from it. The subject remains a popular choice at A’level, what it does mean is that the numbers have remained proportionally static.