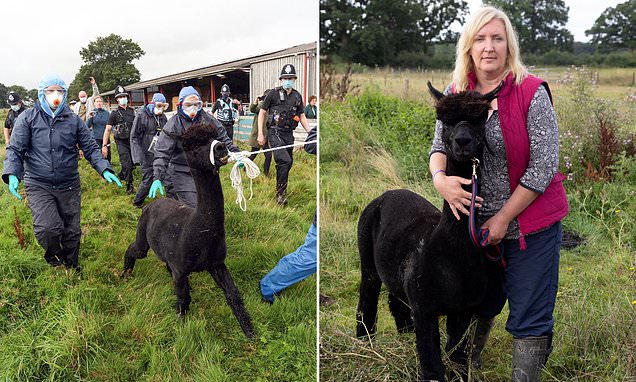 Geronimo's owner Helen Macdonald, 50, was adamant that the alpaca was not infected and launched a campaign to save him. But he was dragged from her farm in Wickwar, Gloucestershire.

Taken from the ONLY Survival Kit that works
for all of humanity, that is when it is put into action.

8:53 You did not come here to destroy and pollute nature, and exterminate the animals; you came here to learn to be good. Man is trying to destroy nature, and the day that he succeeds, you areall dead, and you all think you are sane. This planet belongs to71
God and the animals, NOT to you, and the animals have more right to be here, than you do. It is THEIR home, NOT yours, and they have the RIGHT to survive. 8:54 The animals are not polluting, and trying to destroy nature and themselves, or you. YOU are the only ones STUPID enough to do that, and you have the audacity to call them, DUMB animals, and to think that you are better than them, and that you have more right to be here than they do.What arrogance and stupidity!8:55 You are evil, they aren’t, and they are better than you, and when you have been destroyed, they will still be alive (Gen. 8:21 &Ezekiel 39:17-20). Animals only kill to eat, and in self-defence, as God intended. They do not kill for “pleasure”, like you evil creatures do. LEARN from the animals and nature, like the indians did, and become environmentalists.

STOP being so arrogant; blind and stupid!