Covid, the Devil & the Jews

A warning from Jews against the cabalists/ zionists

Judaism is not defined by the Torah but rather by the Talmud and Cabala. The Cabala posits that the Cabalists represent God and redefine reality by inverting it ("revolution.") Sick is healthy; ugly is beautiful; unnatural is natural; lies are truth and injustice is justice.

Anything that seeks to supplant God is Satanism. This is the origin of "secularism" and "humanism," the worship of man, place-savers for Cabalists. It is also the essence of the New World Order, where Satanism replaces Christianity and true religion.

Cabalist bankers and their Masonic flunkies (our leaders) promote war, depression and scamdemic to advance the NWO.

Cabalists believe that they were ordained by God to destroy or enslave the goyim. They think they are fulfilling God's Will.

Ordinary Jews and Masons are oblivious to the moral and physical jeopardy their Cabalist leaders are putting them in.

Benjamin H. Freedman broke with organized Jewry after the Judeo-Communist victory of 1945, and spent the remainder of his life exposing the Jewish tyranny which has enveloped the United States. Mr. Freedman knew what he was talking about because he had been an insider at the highest levels of Jewish organizations and Jewish machinations to gain power over the U.S.A. Mr. Freedman was personally acquainted with Bernard Baruch, Samuel Untermyer, Woodrow Wilson, Franklin Roosevelt, Joseph Kennedy, and John F. Kennedy, and many more movers and shakers of our times. Though in some minor ways this wide-ranging and extemporaneous speech has become dated, Mr. Freedman's essential message to us - his warning to the West - is more urgent now than ever before.

See that as long ago as 1492 the cabalist Jews told their people to make their sons doctors and pharmacists to take away the christians' lives - hence the scamdemic is the fulfilment of their hundreds of years old plan. 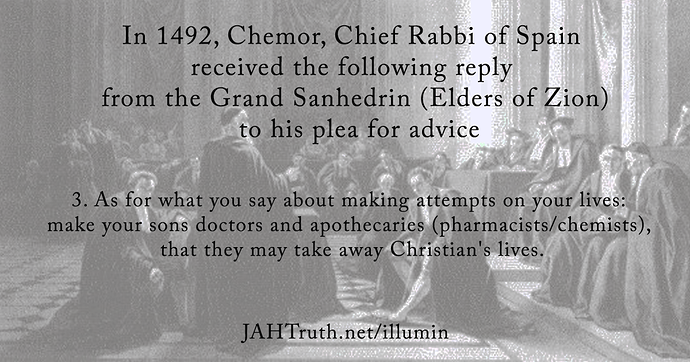 Find-out how and why the United Nations Organisation is the crux of a conspiracy to destroy the sovereignty of the United States, Britain and other nations and the enslavement of these nations' people within a U.N. one-world dictatorship. Learn how the people behind this evil one-world-government conspiracy have been using the mass-communications media, such as television, radio, the press and Hollywood, towards achieving their Satanically-inspired evil aims while arousing little or no suspicion from the general public.

All is revealed in this absolutely amazing, informative article, which explains how the Illuminati and The Council on Foreign Relations have been achieving their evil objectives, by massaging public-opinion through deviously stage-managed world affairs, wars and other events. 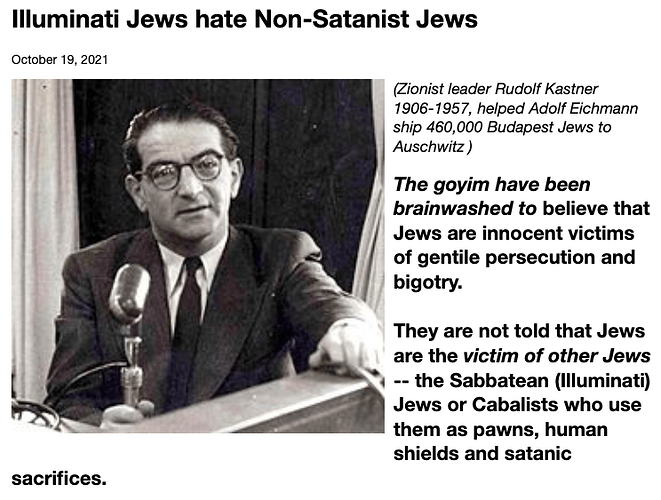 The goyim have been brainwashed to believe that Jews are innocent victims of gentile persecution and bigotry.

They are not told that Jews are the victim of other Jews – the Sabbatean (Illuminati) Jews or Cabalists who use them as pawns, human shields and satanic sacrifices.

"Anti Semitism is indispensable to us for the management of our lesser brethren," say the Protocols of the Elders of Zion (9-2) a "forgery" that reads like the blueprint of the New World Order unfolding today.

Zionists and Communist Jews are Sabbbatean Jews or satanists. They hate Torah Jews and have conspired against them for more than 300 years. I am tired of hearing that some Jews are wonderful human beings. These are not the Sabbateans.

The Holocaust is the finest example of Sabbateans sacrificing other Jews to achieve their goal of a Jewish state, the future capital of their dystopian New World Order. Thus, Zionists have no compunction about sacrificing Israelis to the covid GMO "vaccine" especially if it makes people think "covid" is not a Jewish plot.

The Illuminati consist of Sabbatean Jews and their Gentile Freemason flunkies. Sabbateans are chameleons taking on the identity of their targets, destroying them from within.

Ordinary Jews are the scapegoats for their Satanist brothers who are imposing madness on humanity. Do these Jewish dupes deserve this fate? Yes because they have been indifferent to what Organized Jewry (Sabbateans) is doing in their name. The only ordinary Jew to expose the Satanists is Vicki Polin and that was 32 years ago.

Rudolf Kastner, the Zionist leader in Hungary, made a deal with Adolf Eichmann. For allowing 1700 hand-picked Zionists to go to Palestine, he would help transfer 460,000 Hungarian Jews to death camps.

Kastner acted with the approval of the World Zionist Organization. He was murdered in 1957 to suppress the scandal.

Zionist bankers funded the Nazi Party. It is an outrage that Israel claims to represent Jews and accuses its opponents of "anti-Semitism."

This may explain why Zionists are poisoning Jews with vaccines in Israel today.

There is an unrecognized schism in the Jewish people, where heretics (Sabbateans) have exterminated the mainstream and taken control of the remnant through Zionism and Communism. Yet, due to the anti Semitism organized by them, Jews mistakenly cling to their leadership. They are being crucified like everyone else.

In his book, Holocaust Victims Accuse, Rabbi Shonfeld called the Zionists "war criminals" who usurped the leadership of the Jewish people, betrayed their trust, and after their annihilation, reaped the moral capital. The more Jews died, the stronger the moral case for Israel.

Europe, the “Patria,”exploded and sank off the coast of Palestine killing 252 people.

The Zionist “Haganah” [army] claimed the passengers blew up the ship, Masada style, to protest British refusal to let them land. Years later, the Haganah admitted that rather than let the passengers go to Mauritius, they blew up the vessel for its propaganda value.

“Sometimes it is necessary to sacrifice the few in order to save the many,” Moshe Sharett, a former Israeli Prime Minister said at Patra memorial service in 1958. 252 people murdered by the people they trusted. How’s that for fanatical? But the Zionists have the blood of many more Jews on their hands.

A primary deception of the "jews" is their false claim to be all of Semitic Israel. Most are secular, while others follow some fake Torah if they follow The Torah at all. They are mostly materialistic. 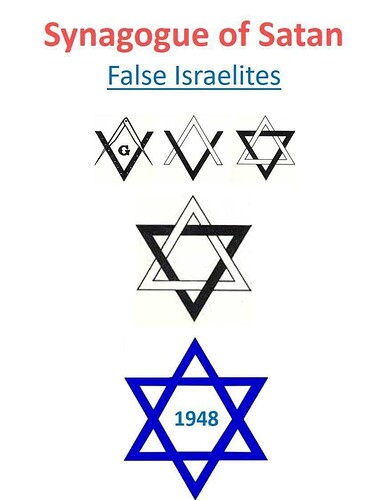 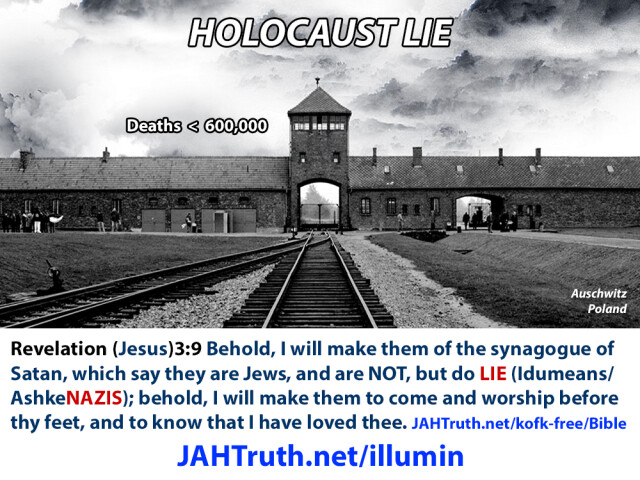 The Illuminati & The Council on Foreign Relations – One-World-Government Conspiracy & The Protocols of the Learned Elders of Zion JAHTruth.net/illumin

“Okay, let’s start again: “Doctor Charles P. Larson, one of America’s leading forensic pathologists, in 1945 was assigned to the US Army’s Judge Advocate General’s department. As part of a US war crimes, investigation team Dr. Larson performed autopsies at Dachau and some twenty other camps examining more than 100 corpses on some days.

Dr. Larson confirmed that none of the autopsies he performed showed any evidence of death by poison gas. But, his conclusion was that death had occurred by typhus and starvation (as a consequence of USAAF and RAF saturation bombing).”

”Your fingers are now drumming on your desk: “Did you know, students, 9 million of the 16 million Jews world-wide are collecting ‘reparations’. Benefits extend to children and dependents born to ‘survivors’ even though they had been born after World War Two. On registering their claim they are handed $35,000, receive $2,000 per month and receive free health care for life. Tell me again, how many Jews died?”

The Illuminati & The Council on Foreign Relations – One-World-Government Conspiracy & The Protocols of the Learned Elders of Zion JAHTruth.net/illumin King of kings’ Bible JAHTr…

Cabala – How Jews Made Sex Our Religion Woody Allen, 42, and schoolgirl Mariel Hemingway, 17. Their romance was depicted in his hit 1979 movie Manhattan. In her autbio, Hemingway said Allen also tried to bed her in real life.

“Never in the Jewish tradition was sexual asceticism a religious value.”

How did society become sex crazed? How did sex get separated from love and marriage? We have been inducted into a satanic sex cult, Cabalist Judaism (Freemasonry.)

Jewish sex addicts like Woody Allen turned us into sex addicts. They trained us to think sex is the Holy Grail. Cabalist Jews believe that sexual intercourse is mystical union with God. They turned sex into an ersatz religion. Judaism is defined by Cabalism, and Cabalism is Satanism.

Sexual depravity is the hallmark of satanic possession.

I reprise one of my most important articles.

Sex, love and “relationships” have become the ersatz religion of modern society. The implied message — Sex is the Way to God — has been in our cultural drinking water since the 1960’s and longer. Movies portrayed sexual intercourse in mystical terms, perfect bodies coupling to a chorus of angels.

The Illuminati music industry pushed the theme that romantic love and sex connect us to God. Take Kathy’s Song (1965) by Paul Simon: “So you see I have come to doubt/ All that I once held as true/ I stand alone without beliefs/ The only truth I know is you.”

This was followed by this scholarly exegesis: Man is “alienated” and alone in the universe. Life has no intrinsic meaning so we must invent one. Man overcomes his separation from God through sexual intercourse, which is mystical in nature. In other words, man and God become One by copulation.

Little did we know that the mystification of sex is pure Cabala. Cabala, the Illuminati “religion”, is Satanism.

Cabala – How Jews Made Sex Our Religion | The Truthseeker

Isaiah 3:8 For Jerusalem is ruined, and Judah is fallen: because their tongue and their doings [are] against the "I AM", to provoke the eyes of His glory.
3:9 The look on their face doth witness against them; and they declare their sin as Sodom, they hide [it] not. Woe unto their soul! for they have rewarded evil unto themselves. 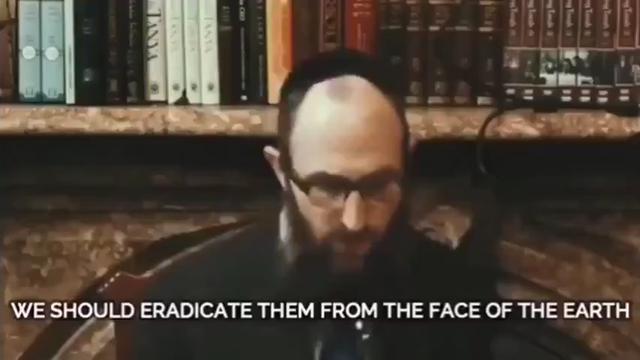 Read the post/thread at Defending-Gibraltar that contains this video: Covid, the Devil & the Jews https://defending-gibraltar.net/t/covid-the-devil-the-jews/2218 To survive what is coming, read/study: https://thewayhomeorfacethefire.net This... 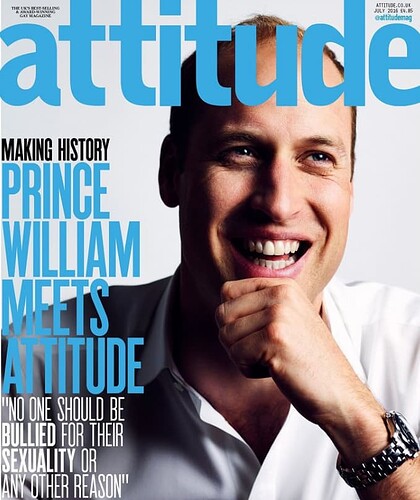 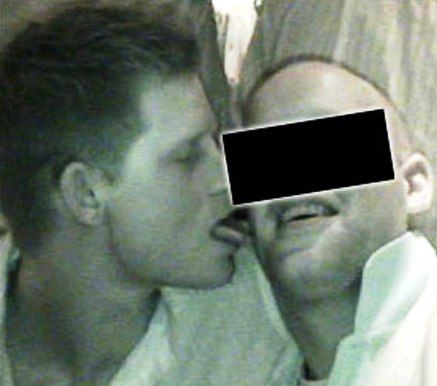 Many lions are sodomites in nature