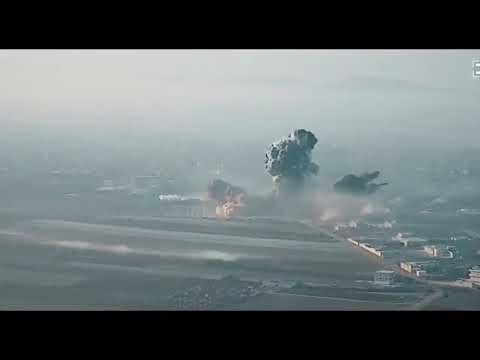 "Leila Molana-Allen is the Beirut Correspondent for France 24.

Leila (an eye witness) claims she saw and heard a fast jet approach the area, followed by a bright flash just before the explosion. I haven't heard anybody else claim anything similar."

I have a fairly close acquaintance here who is of Lebanese descent (and a Maronite Christian) who still has family there as well as about 20-30 million bucks worth of land holdings in the nearby environs of Beirut. His sister-in-law lives about three clicks from ground zero and sent damage photos with commentary to him within an hour of the event, which he thusly forwarded. She is fine physically, but her abode suffered some pretty heavy damage.

Importantly, she too mentioned hearing jets traveling at high speed short seconds before detonation. One of his brothers lives approximately 10 clicks out and he related to my buddy the same jet sounds immediately prior to the explosion.

"From the mouth of two witnesses", sayeth the Lord.

From an acquaintance in Idaho."

“It’s like a war zone. I’m speechless,” Jamal Itani, the city’s mayor, told Reuters. “This is a catastrophe for Beirut and Lebanon.”

Officials said they expected the death toll to rise and that the disaster likely caused billions of dollars in damage. The Associated Press reported up to 85% of the country’s grain may have been stored near the sites of the blast, adding to concern about how the country will import goods with its main port destroyed.

"Here's a picture that's worth a 1000 missiles," said Netanyahu at the UN.

And article about his speech: 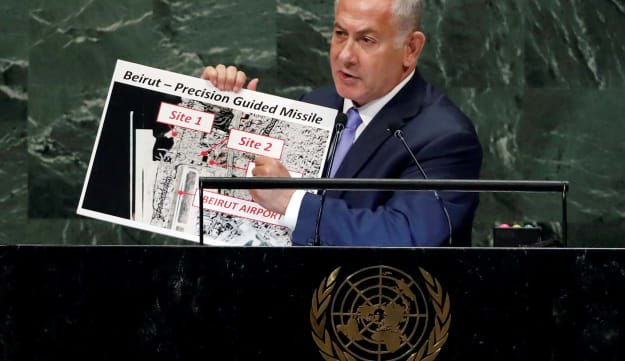 A MASSIVE explosion rocked Beirut, Lebanon on Tuesday. As reported earlier by Cristina Laila The National News Agency reported that the explosion was at a warehouse for firecrackers near the port. A Powerful explosion has occured in Beirut. It’s not... 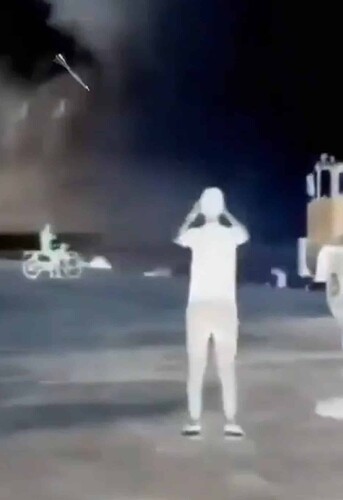 "Censorship of the video by YouTube is taken as evidence, not that the video is genuine, of course it is, you can’t fake infrared, but that Israel is terrified for the first time in a very long time."

Click on these Veterans Today Title (links) to read more:

Veterans Today: A general in the Lebanese Army reports that Israel dropped a tactical nuclear weapon on the port of Beirut today. He reports that this was done to collapse the current political regime there and revolt against Hezbollah.

It’s a long video; and he may do a shorter version later, but the link is provided for those who are interested. He said several times that Mossad’s motto is make war by deception.

That “infrared” footage is an OBVIOUS fake. It’s just inverted colors and the missile has been photoshopped in. I saw the original video way before the “infrared” one…

Another angle can be seen in this video as well as how the surrounding buildings were hit with the blast wave: 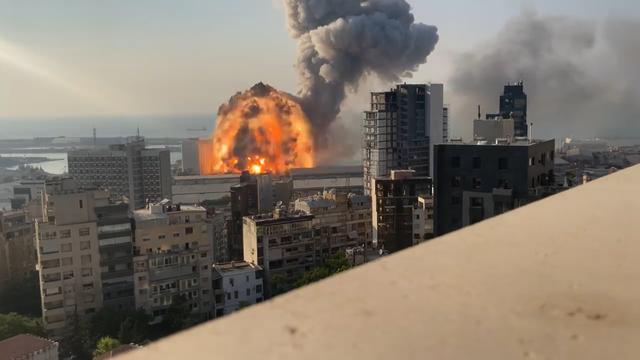 The best video of the Beirut port explosion I've seen so far.

Thanks @cybe and @JF for the videos.

Veterans Today is the one that put up the infrared photos. This is probably one of the many narratives we’ll see so that there is no way, or a long wait, to find out what really happened. VT has many sources and the articles disclose some information from sources in the Middle East.

There is other evidence that this was an attack like the mushroom cloud, Richter scale, radiation levels.

What we do know is T.H.E.Y. want to start WW3; and are probably getting desperate to do so. For one, Bibi may think it will keep him out of jail, where he thinks he’ll be a hero for “expanding the State of Israel”.

Veterans Today is the one that put up the infrared photos.

It surprises me how many socalled experts didn’t notice they weren’t infrared only inverted.

There is other evidence that this was an attack like the mushroom cloud, Richter scale, radiation levels.

I don’t think a mushroom cloud is proof that it was nuclear. What about the richter scale, please? radiation levels? Source, please?

What we do know is T.H.E.Y. want to start WW3; and are probably getting desperate to do so. For one, Bibi may think it will keep him out of jail, where he thinks he’ll be a hero for “expanding the State of Israel”.

In the VT article, it was described as “The city seems like it has been hit by a small scale nuclear weapon.”

There are different reports from it being from 3.3 to 4.5 levels: 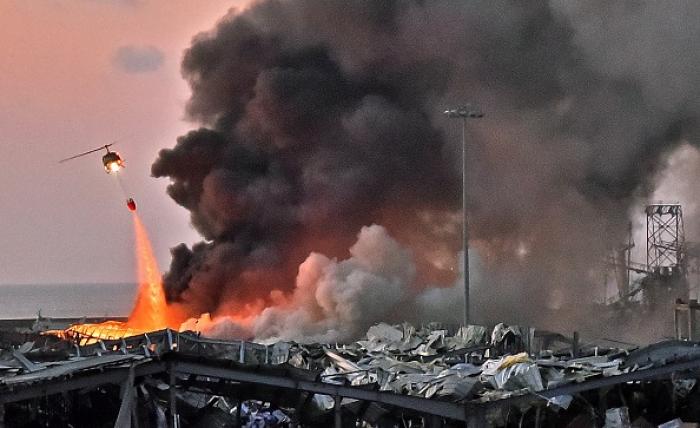 President Trump said Tuesday that U.S. military officials believed a massive blast in the Lebanese capital Beirut was likely “a bomb of some kind.”

Described as 3.5 here: “The explosion was the size of a small nuclear bomb and registered 3.5 on the Richter scale.” 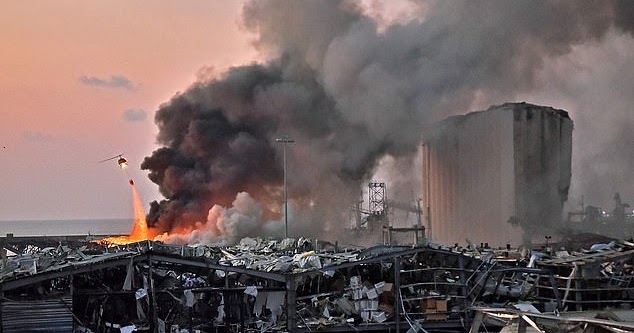 The explosion was the size of a small nuclear bomb and registered 3.5 on the...

Israel has denied having anything to do with the huge explosion in Beirut, adding that the country was ready to give humanitarian and medica... 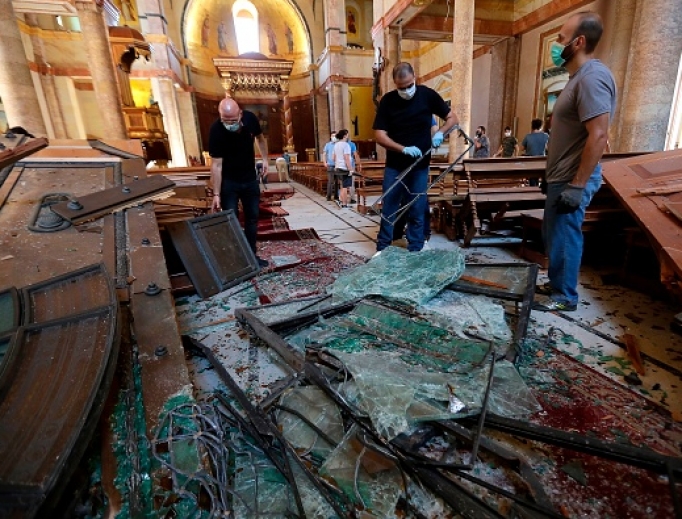 ‘No One Has Experienced This’ in Lebanon: Beirut Blast Unleashes National...

The only Middle East country with a Christian head of state is now in an unprecedented state due to a harbor explosion of chemicals more destructive than wartime devastation.

I think everything T.H.E.Y. do will have plausible deniability, as they progress forward in their evil plan.

We'll probably learn more in the coming days and perhaps as new information comes in, people will share here.

The video at this link is said to be of an explosion that occurred in Syria, 7 months ago.

Satellite image of the Beirut Port, before and after:
https://pbs.twimg.com/media/EeqK8h3WAAEvW7g?format=png&name=large

From: How Big Was the Explosion That Devastated Beirut?

An explosion at a port in Beirut brought destruction to the Lebanese capital Tuesday, damaging buildings, killing more than 100 people, and injuring thousands of others. People recorded videos showing the blast wave and a towering red cloud that some compared to a nuclear weapon's mushroom cloud.

The exact cause of the blast is unclear, but the focus of an investigation is a warehouse improperly storing 2,750 tons of ammonium nitrate.

The blast registered as a magnitude 3.3 earthquake, and the effects of the explosion were felt miles away from the blast site. Experts told Insider the blast most likely had an explosive yield of several hundred tons of TNT equivalent.

Jeffrey Lewis, a nuclear and conventional weapons expert at the Middlebury Institute of International Studies in California, estimated the yield to be "between 200 and 500 tons, looking at blast damage, the shockwave, seismic signals, and the size of the crater."

That much explosive power is at least nearly twenty times greater than that of the GBU-43/B Massive Ordnance Air Blast (nicknamed the "Mother of All Bombs"), which has a blast yield of about 11 tons and is the most powerful non-nuclear weapon in the US arsenal.

The first known use of the weapon in combat was in April 2017 against the Islamic State in Afghanistan.

The explosion in Beirut was so powerful that some observers feared the city had experienced a nuclear detonation of some sort, a fear exacerbated by the mushroom cloud towering over the blast site after the explosion.

The governor of Beirut compared Tuesday's horrific explosion to the atomic bombs that devastated the Japanese cities Hiroshima and Nagasaki during World War II.

"In my life, I haven't seen destruction on this scale," he said. 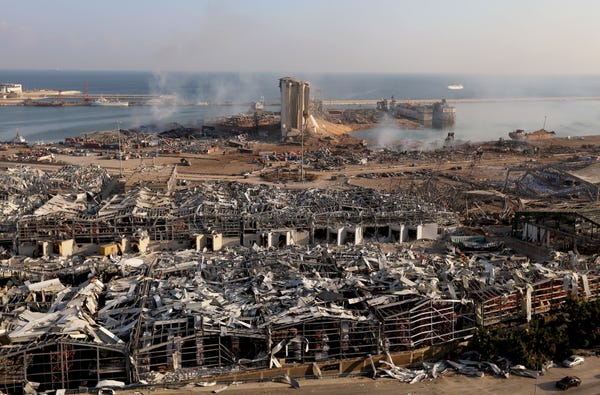 A general view showing the damage at the site of Tuesday's blast.

With an explosive yield of a few hundred tons, the Beirut blast would have been significantly less powerful than the atomic bomb that devastated Hiroshima, which had an estimated yield of about 15 kilotons.

The explosive power would, however, be comparable to the lowest-yield [B61 nuclear gravity bomb](https://www.businessinsider.com/air-force-milestone-for-b61-12-nuclear-gravity-bomb-tail-kit-assembly-2018-12), which is believed to have an explosive yield of about 300 tons.

Some experts have estimated the explosive yield for what happened in Beirut to be [1 to 2 kilotons](Fireworks, ammonium nitrate likely fueled Beirut explosion), which would make the blast more powerful than some of the other small US tactical nukes.

"The comparison ends there," Hans Kristensen, a nuclear weaponry expert with the Federation of American Scientists who pointed Insider to unofficial blast-yield estimates of a few hundred tons, said of comparing the explosion in Beirut to a nuclear blast.

"The pressure wave would be much faster because the energy release from a uncontrolled nuclear chain reaction is much faster than the energy release from a chemical explosion," he said, further explaining that there would have also been intense radiation from a nuclear explosion, including the fallout from detonating a nuclear weapon on the ground.

Kingston Reif, a disarmament and threat reduction expert at the Arms Control Association, told Insider that while the explosive yield of the Beirut explosion might be comparable to that of some US nuclear weapons, "this does not at all mean that the explosion would have felt like the detonation of the lowest-yield B61 variant."

He argued that a "nuclear explosion would have been far worse, as it would include more extreme thermal and also radiation effects," adding that "nuclear weapons are not just another weapon for a reason."

The detonation in the Beirut event is unique. That pressure wave (where the low pressure area trailing the compression wave is visible because of water precipitating out of the low pressure air) is never seen except with hyperbaric bombs or nuclear bombs.

It could occur from a massive detonation, as with a hydrazine plant that blew while making rocket fuel in the U.S. back in the late 80's...

On May 4, 1988, a fire followed by several explosions occurred at the Pacific Engineering and Production Company of Nevada (PEPCON) chemical plant in Henderson, Nevada. The disaster caused two fatalities, 372 injuries, and an estimated $100 million of damage. A large portion of the Las Vegas Valley within a 10-mile (16 km) radius of the plant was affected, and several agencies activated disaster plans. The PEPCON plant, located in Henderson, Nevada, 10 miles (16 km) from Las Vegas, was one of ...

...however, it is very uncommon and requires circumstances that are very difficult to replicate outside of superpower military munitions.

10 different angles of the blast...

On May 28, 1998, in response to a series of Indian nuclear tests, Pakistan detonated five devices in a single day, with a sixth device two days later. Four of the devices detonated on the 28th were tactical nuclear weapons, with explosive yields in the subkiloton (less than 1,000 tons of TNT) to 2-3 kiloton range.

We have estimates from 200-3000 tons for the Beirut blast from experts in military munitions, as well as observations in-situ of a low-thermal yield detonation, which would fall in the range of a tactical nuclear weapon.

Whilist striving to find a source for the claim that Hal Turner failed to provide I came across this:-