Astronomical autumn begins on Friday at 03.04 hours on the Iberian Peninsula. 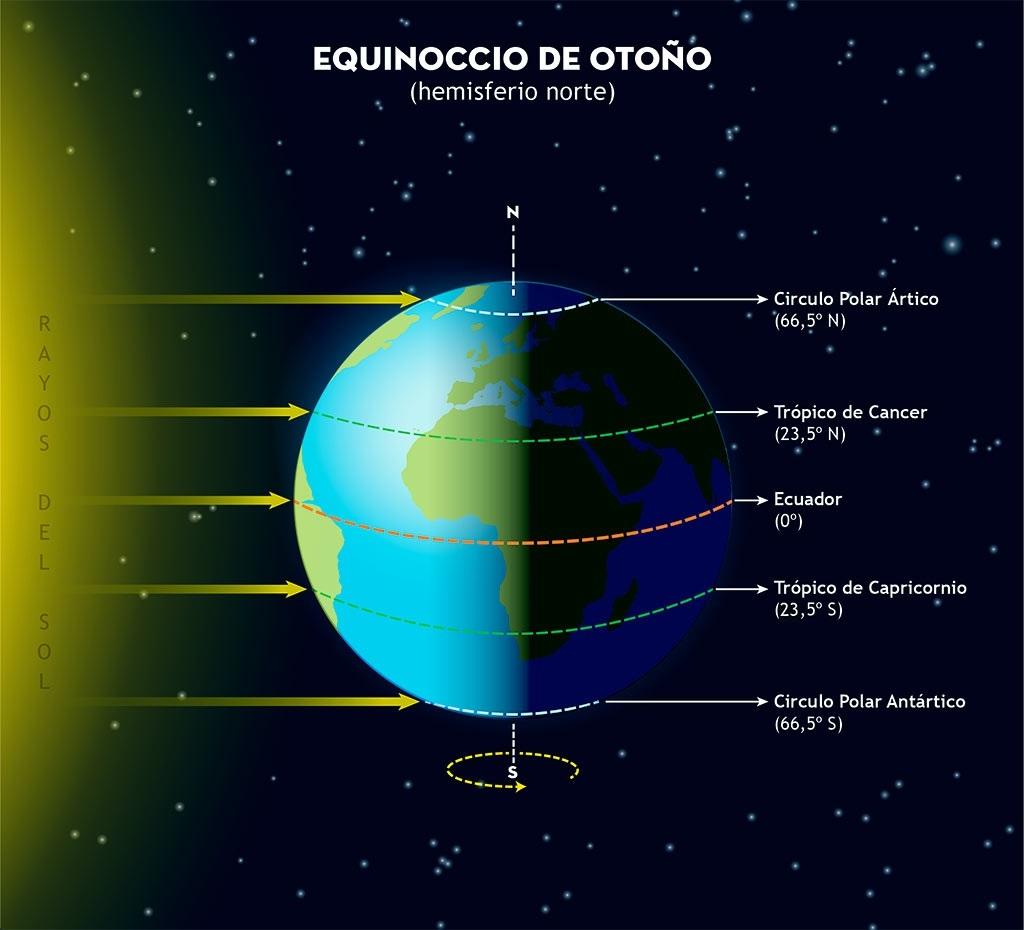 It will last approximately 89 days and 21 hours, and will end on 21 December with the onset of winter.

The astronomical autumn of 2022 in the northern hemisphere begins this Friday 23 September at 03.04 hours on the Iberian Peninsula, which, according to calculations by the National Astronomical Observatory, will last approximately 89 days and 21 hours, and will end on 21 December with the onset of winter.

The beginning of autumn in the northern hemisphere is defined by the instant when the Earth passes through the point in its orbit from which the centre of the Sun crosses the celestial equator in its apparent southward movement.

The sky after sunset at the beginning of autumn will have Jupiter and Saturn as the only visible planets. From December onwards, Mars will appear in the sky in the east and Venus and Mercury in the west, so that the season will end with five planets visible at sunset.

The early autumn dawns, meanwhile, will begin the season with Venus, Jupiter and Mars visible, but the first two will soon disappear in the glow of dawn. Mercury will make a brief appearance during October, and Mars will cease to be seen in mid-December, leaving the dawn sky devoid of planets at the end of the season.

As for the stars and constellations visible at dusk in autumn, the summer triangle, formed by Deneb in the Swan, Vega in Lyra and Altair in the Eagle, will remain visible during the early part of the season, although gradually lower above the western horizon. As the months progress, the constellations Pegasus, Andromeda and Perseus will emerge in the east, and at the end of the season the constellations Taurus and Orion will appear, reaching their maximum splendour during the winter nights.

Two eclipses will occur during autumn 2022, one solar eclipse and one lunar eclipse. The solar eclipse will occur on 25 October and will be a partial eclipse, visible in Europe, northeast Africa and western Asia. In Spain, it will be visible in the northeast penisular and the Balearic Islands, but with very low magnitudes (around 0.1 and lower).

The lunar eclipse will take place on 8 November, will be total, and will be visible in Asia, Australia and America, but will not be seen in Spain.

TIME CHANGE ON THE LAST SUNDAY IN OCTOBER

Although both the European Parliament and the Commission have spoken out in favour of eliminating time changes in the future, there is still no final decision on the matter. Therefore, the traditional time change on the last Sunday in October will remain in place for 2022.

The start of autumn can occur on at most four different dates in the calendar (from 21 to 24 September). Throughout the 21st century, autumn will start on 22 and 23 September (official Spanish date), with the earliest start in 2096 and the latest in 2003.

The variations from year to year are due to the way the sequence of calendar years (some leap years, some not) fits in with the length of each orbit of the Earth around the Sun.

Early autumn is the time of year when day length shortens most rapidly. At peninsular latitudes, the sun rises more than a minute later in the morning than the previous day, and sets more than a minute earlier in the evening. As a result, at the beginning of autumn, the time the sun is above the horizon decreases by almost three minutes each day.