Are you buying all of this fake news?

The policy enforcers can pretend to be mistreated by the people they are physically assaulting after fomenting the riots themselves, and then escalating the violence exactly as planned, but that is nothing more than shameless propaganda.

The policy enforcers have brought all of this on themselves by escalating the division between themselves and the people, with decades of the ever-increasing militarization of their weaponry, armor and equipment, and the training they receive to be as ruthless and brutal as possible (using the Israeli treatment of the Palestinians as the model for their behavior).

This is a plot that Ray Charles could have seen coming:

No wonder we need a New Song. We’ve been singing this same old fake tune for way too long and it’s starting to sound like a broken record.

In reality, may everyone have a good (real, God-inspired) day.

I’m not buying it. And The Lord is the Best Teacher of Truth:

2:7 For the mystery (Rev. 17:5) of iniquity doth already work: only he who now letteth [will let], until he be taken out of the way.
2:8 And then shall that Wicked be revealed, whom the Lord shall consume with the [Sword of the] Spirit from his mouth, and shall destroy with the brightness [of the enlightening] of his coming:
2:9 [Even the Wicked], whose coming is the work of Satan with all power and signs and lying wonders,
2:10 And with all deceivableness of unrighteousness in them that perish; because they received not the love of The Truth, that they might be saved.
2:11 And for this cause God shall send them strong delusion, that they should believe a lie:
2:12 That they all might be damned who believed not The Truth, but had pleasure in unrighteousness.
2:13 But we are bound to give thanks always to God for you, brethren beloved of the Lord, because God hath from the beginning chosen you to salvation through sanctification of the Spirit and belief of The Truth:

From The King of kings’ Bible

Agreed. Unfortunately most have no love for the truth, which is why they so readily embrace all of this fakery and deceit (LIES) as “the new normal”.

Isaiah 30:8-13
30:8 Now go, write it before them in a table, and note it in a Book, that it may be for the time to come for ever and ever:
30:9 That this [is] a rebellious people, lying children, children [that] will not hear The Law of the “I AM”:
30:10 Which say to the Seers, See not; and to the Prophets, Prophesy not unto us right things, speak unto us smooth things, prophesy deceits (lies):
30:11 Get you out of The Way, turn aside out of the path, cause the Holy One of Israel to cease from before us.
30:12 Wherefore thus saith the Holy One of Israel, Because ye despise this Word, and trust in oppression and perverseness, and stay thereon:
30:13 Therefore this iniquity shall be to you as a breach ready to fall, swelling out in a high wall*, whose breaking cometh suddenly at an instant.

*a wall built inside our own minds by the (constantly inflating/swelling) “self”, to keep the Truth out.

On the subject of FAKE "fact checkers", who are subsequently outed as paid spin-doctors/liars (e.g. the David and Barbara Mikkelson, aka "Snopes").

Flora TeohThe far left tech companines are moving at light speed to eliminate free speech in the West. The YouTube-Google CEO announced recently that the world’s largest video platform would only allow WHO approved talking points on their platform. They will delete other videos that are not...

Indeed we need a new song, I don’t remember when I last watched news full of false/fake hope, yielding to nothing but buying time as they keep stealing our God given rights.

Only showing what they want us to hear not what is actaully needed, sick of thr brainwash.

Here, so longer as the government receives donations, people's lives are put at stake with fake news, false hope full of empty promises while donations end up in the hands of the few minority government officials. They keep extending lockdown so as to enable them account for the donations to their slaves masters, whiling shuttering the economy, produce prices have dropped so low that the majority poor who relay on farm produce have lost market for the produce they have especially perishable goods which can not be stalked.

People have become so accustomed to listening to all of this FAKE news from the FAKE corporate mainstream media, which is nothing more than a mouthpiece for the FAKE government (all governments and their agencies are corporate fictions), that they actually believe the LIES that come out of the mouths of all of these FAKE “leaders” (aka politicians).

We’ve been told for thousands of years by the only REAL authority there is, The King Ruler of the Universe, to stop believing these idiots, who are really nothing more than criminal conspirators pretending to be authority, but sadly very few have taken any notice.

Isaiah 3:12 [As for] My people, children [are] their oppressors, and women rule over them. O My people, THEY WHICH LEAD THEE cause [thee] to err, and lead thee astray, TO THY DESTRUCTION.

Jeremiah 11:9 And the “I AM” said unto me, A CONSPIRACY IS FOUND among the men of Judah, and among the inhabitants of Jerusalem.

The reason God is no respecter of “persons” (which men have defined as corporations) and their FAKE, made-up titles and self-appointed positions of authority, is because it’s all LIES.

It came out this week in the news that the WHO has now admitted it is “very rare” for someone who is asymptomatic to have or be a carrier for the coronavirus (common cold). So we now have it straight from the horse’s mouth that this global economic shut down was admittedly on the basis of FAKE projections for a FAKE virus that isn’t magically contagious like they’ve been regurgitating incessantly through their FAKE media outlets, and thus cannot spread in the fantastical manner that these “experts” originally falsely claimed.

At the very least, this should let everyone know these people in their positions of power are either incompetent or they intentionally did this to suit their own evil agenda to install their one-world government. Does anything actually happen in politics without being planned? Not according to FDR.

And that’s what people seem to struggle with the most. It always easier to admit we’re being led to our destruction by a bunch of idiots than it is to believe somebody is planning these things and has fooled us, because we’re too smart to be fooled.

“ The bigger the lie and the more often it’s told, the easier it is for people to believe it.”
–Hitler 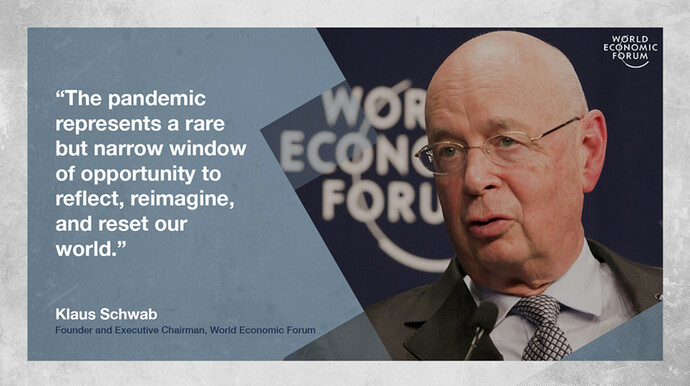 The Great Reset Plan Revealed: How COVID Ushers In The New World Order -...

The proposed solution is the Great Reset. In this report Spiro examines what exactly is the great reset and who is involved.

"It is an organized destabilization operation," explains Sprio Skouras of Activist Post. This video is included in the above linked article:

Iam not buying it either, I refuse, Agreed, we look upto our sweet Lord for all the needed truth.

Laughter here about when their lips are moving, thank you.