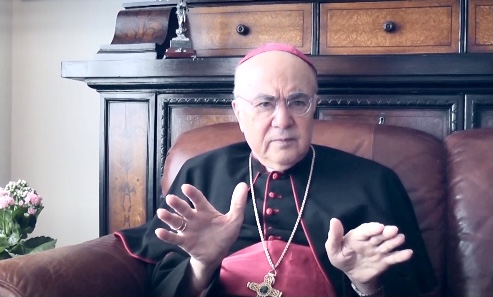 'These courtesans of power, whom no one has elected and who owe their appointment to the globalist elite that uses them as cynical executors of their orders, have since 2017 declared in no uncertain terms the society that they want to achieve.'

TURIN, Italy (LifeSiteNews) — This is a translated transcription of Archbishop Viganò’s video message for the October 15, 2021 “No Fear Day” in Turin (Torino), Italy.

You have gathered, in such great numbers, in this piazza in Turin, as hundreds of thousands of people all around the world show their opposition to the establishment of a global tyranny. For months now, despite the deafening silence of the media, millions of citizens from every nation have cried out their “NO!” No to the pandemic folly, No to the lockdowns, to the curfews, to the imposition of vaccines, to the health passports, to the blackmails of the totalitarian power enslaved to the elite. It is a power that reveals itself as intrinsically evil, animated by an infernal ideology and driven by criminal purposes. A power that now declares that it has broken the social contract and considers us not as citizens but as slaves of a dictatorship that today is a health dictatorship and tomorrow will be an ecological dictatorship.

This power is so convinced of having now succeeded in its silent coup d’état that it shamelessly slaps us in the face not only with the ideology that motivates it but also with the religion that inspires it. This very day on the Quirinal Hill – the Palace that was once the residence of the Supreme Pontiffs in the City of Rome – an exhibition is opening that is emblematically entitled “Inferno,” whose centerpiece is Auguste Rodin’s sculpture The Gates of Hell, completed between 1880 and 1890. This work was intended to serve as the entrance of the Museum of Decorative Arts in Paris, and its model was also presented at the 1900 Paris Exposition to seal the Masonic and anti-Catholic nature of that event. What’s more, for years now the idol of Moloch from the set for the film Cabiria has stood at the Colosseum. So we have the demon who devours children, the “Gate of Hell” inspired by Charles Beaudelaire’s poems Fleurs du mal (Flowers of Evil), and also the “Festival of Blasphemy” a few days ago in Naples. In the city of San Gennaro (Saint Januarius), with the permission of the municipal government, posters were displayed showing horrible blasphemies against God, to celebrate freedom of thought and speech by insulting the Lord.

They tell us clearly: they are servants of the devil, and as such they claim the right to assert themselves, to be respected, and to spread their ideas. And not only this: in the name of a usurped power – a power that according to the Constitution ought to belong to the people – they demand our obedience to the point of self-harm, the deprivation of the most elementary rights, and the cancellation of our identity.

These courtesans of power, whom no one has elected and who owe their appointment to the globalist elite that uses them as cynical executors of their orders, have since 2017 declared in no uncertain terms the society that they want to achieve. In the documents about the Agenda 2030 that are found on the website of the World Economic Forum we read: “I own nothing, have no privacy, and life has never been better.” Private property, in the plan of the globalists promoted by Klaus Schwab Rothschild, will have to be abolished and replaced by a universal income that allows people to rent a house, survive, and buy what the elite have decided to sell them, perhaps even sunlight and the air they breathe.