Another article too hot to handle; even vaccine critics won’t run with it 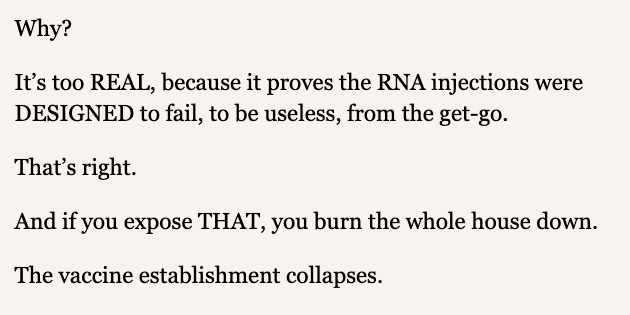 Another article too hot to handle; even vaccine critics won’t run with it « Jon Rappoport's Blog

A few days ago — in my article The Test for Klaus Schwab and the World Economic Forum, I republished my proof that the medical cartel has been routinely killing millions of people, with its treatments, for at least the past 20 years.

And when I say proof, I’m talking about clear mainstream research.

Apparently, even many “alternative” journalists and doctors are keeping a piece of their souls in the official prison of fake medicine and fake science. On purpose.

They want to admit some things, but not other things.

So today, I’m posting another one of my “too hot to handle” pieces. I’ve published this article at least four times. Even doctors who oppose the COVID vaccines won’t pick up on it.

It’s too REAL, because it proves the RNA injections were DESIGNED to fail, to be useless, from the get-go.

And if you expose THAT, you burn the whole house down.

No one will believe anything the establishment says about vaccines. Nor should they.

And many journalists and doctors of all stripes want to “protect the public” from THE TRUTH.

I don’t want to bury the truth. I’m not settling for half.

I wrote and posted this piece while the clinical trials of the COVID vaccine were in progress. It reveals how and why those trials were constructed and designed to fail. They did fail.

The vaccine makers DESIGNED a series of clinical trials that, even on their own terms (“the virus is real, fear the virus”) were destined to be a complete flop.