Alex Berenson: Boosters Are A Dangerous And Ineffective Product, They Need To Be Withdrawn. 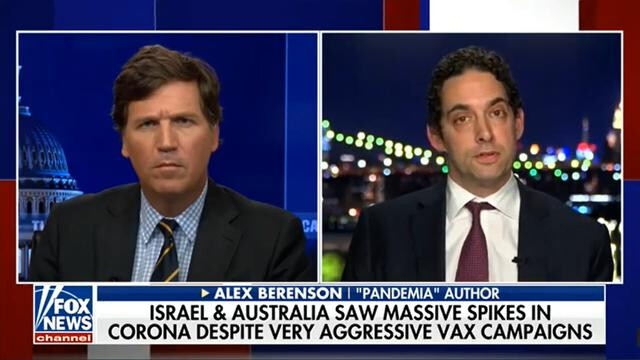 Tucker Carlson Tonight- Alex Berenson Boosters Dangerous and Should be Pulled Please Subscribe and Share, it's free and helps the channel immensely! Please join our Locals Community: https://insearchoftruth.locals.com Find me on Gab:...

Berenson said, "It is completely clear now that the vaccines don't really work at all against Omicron."

In these highly vaccinated and highly boosted countries, rates of infection are incredibly high and rates of serious disease and death are also rising.

The Israelis are predicting they are going to have more serious cases than they ever had at the peak last year. And the idea that we would solve this with another booster is just off the charts insane.

"The spike that they make your body make that you produce antibodies to – it's not the Omicron spike."

"Earlier today Tony Fauci said we're not going to give people monoclonal antibody products, the first-generation products, because they don't work against the Omicron spike. The same logic applies to these mRNA vaccines and giving people boosters, even if in the very short term, knocks down infection rates there is a boomerang effect and that's what they are seeing in all of these countries.

"We're at a dangerous moment and these products need to be withdrawn."

"It's over, people," was the response from Alex Berenson, a former New York Times reporter who has devoted his independent reporting to the pandemic, publishing several books on the subject. Aside from a few unlucky Israelis, no one is going to receive a fourth dose of the original vaccine; everyone with eyes can see it doesn’t work against Omicron." Boosters are over - by Alex Berenson - Unreported Truths