A nuclear submarine with intercontinental missiles is expected in Gibraltar tomorrow.

Gibraltar press does not usually publish news about US submarines arrival or presence at The Rock.

Military escalation continues on the Rock with another submersible due at the weekend.

A US Ohio-class submarine with intercontinental ballistic missiles capable of carrying nuclear warheads is expected to arrive in Gibraltar tomorrow (Wednesday). A second submarine, in this case British, could also dock at the weekend, which would confirm the military escalation that has focused on Gibraltar since negotiations with the EU began.

The US submarine expected in Gibraltar tomorrow is the USS Georgia, of the Ohio class, equipped with intercontinental ballistic missiles capable of carrying nuclear warheads. The previous presence in Gibraltar of a US nuclear submarine of the Ohio class was the USS Alaska (SSBN-732), which arrived on 28 June last year and remained semi-hidden behind a line of floating containers in the harbour until 1 July, as reported by Gibraltar News at the time and can be read here.

The arrival of a second submarine, in this case British, is also possible for the weekend, although this media has not been able to confirm this.

Nuclear submarines are weapons whose fundamental mission is to remain hidden and their presence in any port can only be for the purpose of carrying out repairs, personnel rotation or embarkation, or public display. In this case, there is no record of any rotation of personnel, so it can only be for repairs or a public display, or even a combination of the latter two, as it is used for some minor maintenance or repair work while the flag and the weapon are displayed in the chosen port.

The military escalation on the Rock, which clearly intensified following Brexit and, in particular, in parallel to the negotiations, first with Spain to lead to the New Year's Eve Agreement and, now, with the European Union, to decide the future status of Gibraltar, continues in this way.

In fact, the city of Gibraltar is currently undergoing its third military manoeuvres so far this year, practically one per month, during which Gibraltarians can see uniformed soldiers in the streets, fully equipped and carrying their regulation (unloaded) weapons, as already reported in this newspaper and as can be read here.

As is well known, negotiations between the United Kingdom and the European Union to reach some kind of agreement on Gibraltar should have been concluded at the end of last year and were extended until Easter, but there is no news so far that an agreement is close. Spanish Foreign Ministry makes diplomatic protest to US after American...

The Spanish Foreign Ministry has made a diplomatic protest to the United States after an American Nuclear submarine has stopped at Gibraltar.

The USS Georgia is the fourth Ohio-class nuclear powered ballistic missile submarine, and the third ship to bear the name. The keel laying ceremony was presided over by First Lady Rosalyn Carter, wife of President Jimmy Carter in 1979, and was launched in 1982 at the height of the cold war.

Press reports claim the Spanish Government is questioning the choice of the Naval Base as opposed to Rota which it says is nearby and offers similar facilities.

Spain has also used the opportunity of the visit to call for maximum security measures to be put in place with guarantees for the safety of people and the environment.

Maintenance on nuclear propulsion systems can not be carried out on the Rock although the base allows for minor repairs, operational recuperation, material re-supply and personnel changeovers.

Russia launches largest submarine to be built in 30 years. 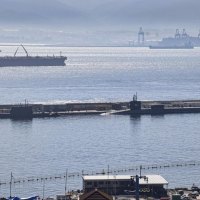 The decision of the Spanish government to protest to the United States of America about the call at Gibraltar of the USS Georgia will have raised eyebrows in military circles.

This is not because of the protest per se but because of its poor timing and the reported suggestion that the sub should have gone to Rota instead.
PROTESTS
These protests are nothing new. The Spanish have long held geopolitical ambitions to control both sides of the Strait of Gibraltar. There are those in Spain who regard the presence of the UK and its Allies on the Rock as something that stands in the way of that ambition. So rather than see these submarine calls as normal cooperation between Allies and friends, they view them through the narrow prism of what they perceive to be their own national interest.