A MOUNTAIN OF GOVERNMENT – Or Pyramids of THEM

A MOUNTAIN OF GOVERNMENT – Or Pyramids of THEM

In this world, there are only two forms of government: God’s and Satan’s. God has twelve Heavenly Commandments and the Royal Perfect Laws of Liberty and Satan has 12 million or so rules of oppressi…

"Satan is POISONING everyone in their environments with depleted uranium, carbon monoxide, carbon dioxide, lead, phosphorous, cadmium, mercury, chemtrails and other harmful agents."

"Again, God’s thrown down all Satan’s governments. In ancient times, it was Babylon and the Roman Empire. With Hidden Hands, Satan tried to build a German Empire through Hitler, the Antichrist, who claimed be the savior of Germany who would reign as Christ for a 1,000 years, but spoke with deception and lies and became their idol. His military was great, just like the previous Roman one, and Hitler resurrected it using Roman military-standards and emblems. Revelation, Chapter 13 is about Hitler and his would-be German Empire. God threw it down! Satan’s now built the Universal Roman Catholic Nazi United Nations Empire (URCNUNE), but God plans to throw it down too."

A Nazi-style totalitarian government is currently being built. And this plandemic was the building block to complete the establishment of the Banksters' Technocracy.

It’s not all the people of the nation, but their princes and kings (representatives and leaders). “Withhold thy foot from being unshod, and thy throat from thirst: but thou saidst, There is no hope: no; for I have loved strangers, and after them will I go. As the thief is ashamed when he is found, so is the House of Israel ashamed; they, their kings, their princes, and their priests, and their prophets (Jeremiah 2:25-26).” The princes and kings are the weak-willed souls who have succumbed to Satan’s temporary worldly treasures and the rewards of his high mountain; and some are wolves.

And what is the symbol of the Fabian Society - a wolf in sheep's clothing. Beware of Wolves Wearing Sheeps' Clothing.

The word “mountain” is a prophetic code word for government. This code is used throughout Scripture, not just in Revelation. A mountain like government towers over the people. The sea is a code word for restless, dissatisfied people; heaven for political systems, which are above the mountain-governments; hills for bureaucracies; islands for those isolated elite groups; earth for downtrodden people; and rocks for churches.

It’s not that hard to figure out when one should use the code word, instead of the actual word, like when Christ said that if we have enough faith, we can say to the mountain (government), fall into the sea (people) and it will (Matt. 21:21)… “for verily I say unto you, If ye have faith as a grain of mustard seed, ye shall say unto this government, Remove hence to yonder place; and it shall remove; and nothing shall be impossible unto you (Matt. 17:20).” People are trying to play by Satan’s rules (legislation – all rigged in his favor); instead of by God’s Law that favors us. 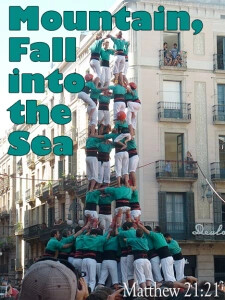 A Mountain of Government – Or Pyramids of THEM

What's it going to take for the sea of people to rise up against the evil practices of their governments?

What's it going to take for the sea of people to rise up against the evil practices of their governments?

I hope his finds you well, well-rested, in good spirit and having a good day.

May this be an opportunity to thank you for your educational website that expands and elaborates on the messages from JAHTruth.net. I have learned so much! Your skill of expression and writing is impressive. Often when I write something, or speak directly to another, I am asked if I am from another planet!

As it turns out, as I learned after reading TWHOFTF, I am!

People are waking-up enmasse. It is amazing. Perhaps not exactly as hoped for, but let Father and The Lord be the Judge as we are all so unique and different. It all started with this crazy plandemic. I remember it well because it was late 2019 / early January 2020. I was tending to a dog that was rescued and it turned out she was pregnant. 2 January 2020, I was tending to her newborn pups and life ahead seemed status quo and carry on as usual. Then it began ...... the attack by the China virus President Trump said. At first, I was onboard with it because I very much believed in the possibility of a bioweapon attack on the population. Miraculously, I was contacted by a member of the DG group (I do not think I was a member yet) and he helped me to begin to see behind the lies. It was like a "wait a minute" moment. Thank-you to him. He knows who he is.

People are changing at different levels because their starting points are all different. In life there is hope. Needless to say, though "we the people" may have more time, I am not sure that we have a lot more time (relatively speaking). Father and The Lord have been very patient.

So, thank-you Hannah Michaels. There is much to be thankful for, but a lot of work ahead too.

You're welcome. And thank you for the kind message.

It has been a pleasure to serve Christ and to point people to Him.

It certainly gave my life meaning - much more than the "existence" it had on this planet, wondering the purpose of life here.

Reading The Way home or Face The Fire made EVERYTHING HAPPENING here make sense. It made sense why I felt like I didn't belong. The little book and JAHTruth are truly pearls.

By God's Grace, I found them, just like you.

People do change at different levels and different times – some come first, some come later - we all get a penny (Matthew 20:1-16).

As for me, I'm fine with that knowing we all work for Him. It is a good day when anyone wakes up whether it's today or in a few weeks.

Thank-you for sharing these awe-inspiring words. Humbling but powerful they are. Not for the fainthearted.