4 Billion Useless Eaters To Be Culled by 2050

"To the people who own and run the planet, humanity has become dead weight except as servants and sex slaves. Below, MI-6 whistleblower John Coleman describes the covid end-game, a return to feudalism. People lining up to get vaccinated remind me of lemmings throing themselves into a gorge. A pandemic with a minuscule death rate is not a pandemic. We hardly see anyone sneezing any more yet we’re supposed to be in a pandemic? We are passengers on the Titanic, dancing while the ship sinks." 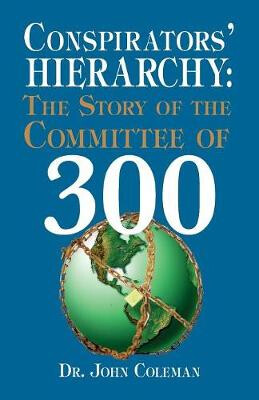 "At least 4 billion "useless eaters" shall be eliminated by the year 2050 by means of limited wars, organized epidemics of fatal rapid-acting diseases and starvation. Energy, food and water shall be kept at subsistence levels for the non-elite, starting with the White populations of Western Europe and North America and then spreading to other races. The population of Canada, Western Europe and the United States will be decimated more rapidly than on other continents, until the world's population reaches a manageable level of 1 billion, of which 500 million will consist of Chinese and Japanese races, selected because they are people who have been regimented for centuries and who are accustomed to obeying authority without question."

– CONSPIRATORS' HIERARCHY: THE STORY OF THE COMMITTEE OF 300 by Dr. John Coleman 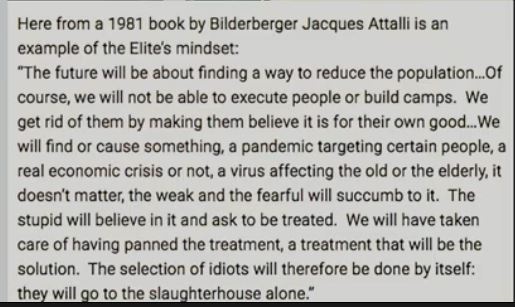 From State of the Nation

HOW TO ELIMINATE UNVACCINATING PEOPLE THROUGH A VACCINATION PROGRAM

What if there is something EVEN WORSE behind this unending pandemic? Thinking that the people behind this pandemic are malefic, wouldn’t they like to be able to find a way to DIVIDE the people into age/health/occupation groups, and SELECT THE GROUPS that they want to KEEP ALIVE? And also DECIDE THE NUMBER of survivors? The World Health Organisation Vaccination Program****is the perfect tool to achieve a SELECTIVE GENOCIDE**, rather than a RANDOM one!**

We are talking about a situation which IS NOT GOOD EITHER IF YOU VACCINATE or YOU DON’T VACCINATE, EITHER IF YOU DIE or IF YOU LIVE! The only truth we have to concentrate on now is that we didn’t even need to be forced to make the choice of GETTING VACCINATED OR NOT GETTING VACCINATED! This is a FALSE CHOICE in this created pandemic, as an answer to a FALSE PROBLEM! As long as we are caught in this choice (it doesn’t matter if we choose to get vaccinated or not), we are in a NO WAY OUT situation!

NOW, PLEASE, THINK YOU ARE ONE OF THESE PERSONS WHO IS BEHIND THIS PANDEMIC AND TRY TO ANSWER THIS QUESTION:

HOW WOULD YOU KEEP ALIVE a target number of people, mostly under 65 years old, without chronic diseases or handicaps, from selected countries?

and, at the same time, HOW WOULD YOU ELIMINATE ALL UNVACCINATED PEOPLE**, most of the world’s** governmental authorities**, the elderly, the sick, the handicapped and the homeless?**

HERE IS HOW IT WOULD BE POSSIBLE:

Warnings from Dr. John Coleman are wrongly being attributed to Klaus Schwab: see image below: 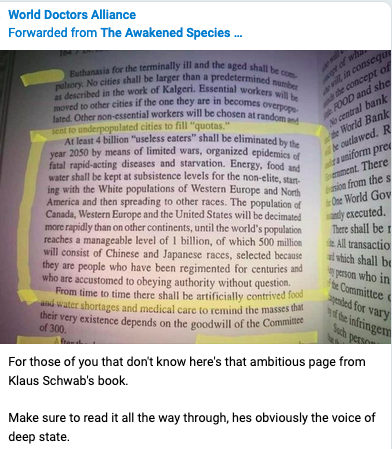 The following is Coleman's Warning from his book:

Cause by means of limited wars in the advanced-countries, and by means of starvation and diseases in Third World countries, the death of 3 billion people by the year 2000, people they call "useless eaters." The Committee of 300 commissioned Cyrus Vance to write a paper on this subject of how best to bring about such genocide. The paper was produced under the title the "Global 2000 Report" and was accepted and approved for action by President Carter, for and on behalf of the U.S. Government, and accepted by Edwin Muskie, then Secretary of State. Under the terms of the Global 2000 Report, the population of the United States is to be reduced by 100 million by the year 2050.

READ CONSPIRATORS' HIERARCHY: THE STORY OF THE COMMITTEE OF 300