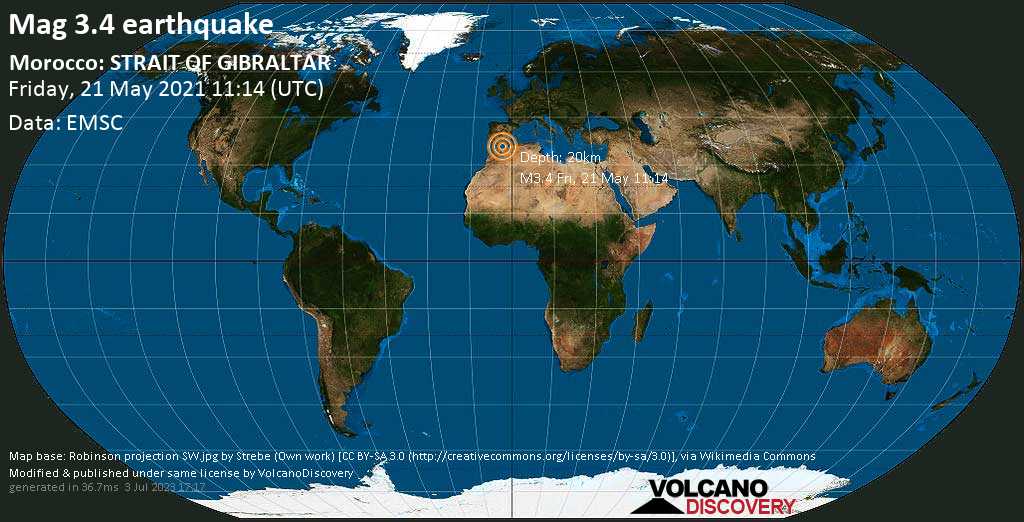 Alboran Sea seems active recently - one on April 17 and May 1 (according to the link). The Alboran Sea is the westernmost portion of the Mediterranean Sea, lying between the Iberian Peninsula and the north of Africa (Spain on the north and Morocco and Algeria on the south). The Strait of Gibraltar, which lies at the west end of the Alboran Sea, connects the Mediterranean with the Atlantic Ocean.

Just makes me think about "earthquakes" in the Bible – real and metaphorical.

EARTH - Downtrodden people (oppressed and poor).
EARTH-QUAKE - Great upheaval of the EARTH (as above).
SEA - Restless, moving people who are not as oppressed and are free to move around (Psalm 65 v 6,7). (Source)

Of course this light shaking in the Alboran Sea is nothing compared to the Earthquake Coming to the Holy Lands, putting Jerusalem seaside:

Rev. 11:13 And the same hour was there a great earthquake, and the tenth part of the city (Jerusalem) fell, and in the earthquake were slain of men seven thousand: and the remnant were affrighted, and gave glory to the God of heaven (Matt. 21:9).
16:18 And there were voices, and thunders, and lightnings; and there was a great earthquake, such as was not since men were upon the Earth, so mighty an earthquake, [and] so great (Zech. 14:4).