2020: The Year we Let Ourselves be Infantilised and Dehumanised

I recently wrote a satirical speech by our Prime Minister, in which I imagined him coming up with all sorts of absurd rules for the Christmas season. It was really hard. Not because I was unable to come up with hundreds of such rules, were I minded to do so, but because the whole point of satire is to raise the absurdities up a step or two, in order to highlight the ridiculousness of what is happening. But how do you do this when the real-life absurdities have already been turned up to 11 on the amplifier? I kid you not when I tell you that my original list included a rule against playing certain board games over Christmas — which I rejected — only to see a few days later SAGE coming out and advising against the playing of board games.

We have now had nearly nine months of being treated like utter imbeciles. A once great country with a once free people has been reduced to the level of being governed by pathetic, childish slogans. And for some reason we have allowed ourselves to be infantilised.

I am utterly baffled as to how people can have sat through some of these slogans being introduced without responding with howls of laughter.

we have allowed ourselves to be infantilised.

Infantilized (literally).
It is not uncommon for an infant to playfully pull their diaper off and put it on their head or face or if it is uncomfortable, take it off and throw the diaper over the crib. 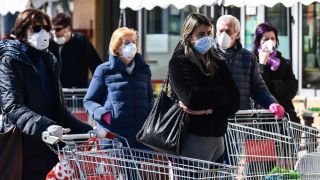 At least when the infants do it, they do it with freewill! More and more people don't want to wear the facemasks, but they will not exercise their freewill and just say NO MORE!