This 2017 Johns Hopkins document describes a “simulation” which exactly mirrors everything that is happening to us today, and lays out the future. It says covid vaccinations are a weapon of mass genocide. See below- Aftermath: Long-Term Side Effects, Lawsuits and a Loss of Trust. The 2025-2028 projection is actually 2020-2023.

In the clip below, Kill Bill Gates was recorded on camera calling the covid vaccine shot "the final solution", during an interview (presumably it happened live) on the Colbert Report: 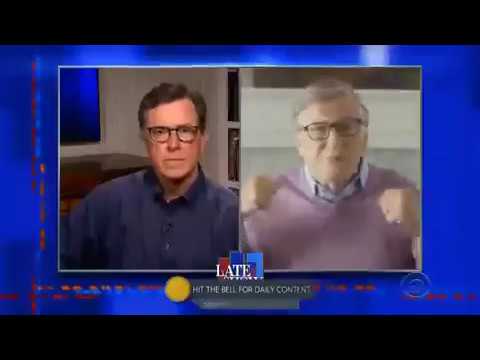 Some people then asked, why did he say that?

One person said when Colbert interviewed Gates, they watched Colbert's face and that he was trying without success to mask his horror and that he knew he was in the presence of a monster but the cameras were rolling.

Others were seen who said it was just a "poor choice of words" on his part and nothing more. In any case, it seems no outcry was deemed necessary by the MSM after it happened.